The abdomen is the largest portion of the torso and also has the largest cavity with the most amount of organs within it. There are a host of problems that can arise in the abdominal cavity and with the different organs crammed within it, it is sometimes difficult to identify an exact cause of symptoms. Often the approach to determining the cause of symptoms, like pain, is to first isolate the region in the abdomen from where it arises.

What is epigastric pain?

Epigastric pain is any discomfort, tenderness or pain that arises from the upper middle portion of the abdomen. This area is known as the epigastrium when dividing the abdomen into nine equal regions. The pain may vary in nature (sharp, cramping, burning, and so on) and intensity (from mild to severe) depending on the underlying cause as well as the individual perception and tolerance of pain.

Organs in the Epigastrium

There abdominal regions are not compartmentalized internally, meaning that an organ in one region may extend into another. A change in body position can also displace organs to a slight degree. When it comes to the epigastrium the following are the main organs to occupy this region:

However, it is important to note that only a portion of these organs sit in the epigastrium. For example, most of the stomach lies in the left hypochondriac region with the end portion (pylorus) extending into the epigastrium. It is also important to consider problems with the abdominal wall which may be the source of the pain. 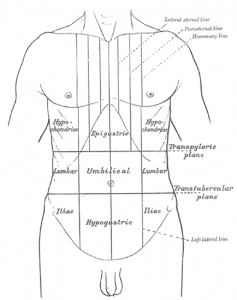 Based on the organs lying in this region, epigastric pain is therefore usually due to liver, pancreas, gallbladder, bile duct, stomach, duodenum and/or abdominal aorta conditions. While diseases of these organs should first be investigated, the presence of other signs and symptoms may also warrant investigating other organs outside of the epigastrium.

Although liver pain is generally associated with the right upper quadrant it can sometimes be felt in the midline, within the epigastric region. Waste and other byproducts from the liver are excreted through bile which is stores in the gallbladder temporarily. The pain with most gallbladder conditions are more centrally located within the epigastrium but may also be slightly towards the right of the midline.

Some of the conditions that may give rise to this liver pain includes:

The pancreas is a long gland that extends across the midline of the upper abdomen. The location, nature and severity of pancreatic pain depends on the part of the organ that is affected and the underlying disease. Other symptoms include:

These symptoms are mainly due to the following conditions:

Pain in the stomach and duodenum is usually described as burning or gnawing in nature. It tends to be worse during and after eating or when hungry. Some of the possible conditions that may give rise to epigastric pain includes: