The body has an efficient mechanism for stopping blood loss when bleeding arises. This mechanism has several phases to first reduce the degree of bleeding, temporarily plug the point of the blood loss, further seal the area for the long term and then expedite healing of the affected blood vessel to restore its integrity. The entire process is carefully coordinated by the body to ensure that the sequence of events will stop the blood loss as rapidly as possible. In some instances where there is a severe injury with excessive blood loss, these mechanisms are ineffective and medical attention is necessary.  This is usually when the tear or rupture of the blood vessel is so severe that physical measures are needed to preserve life until medical attention can be sought. At other times, a person with bleeding disorder may find that even a minor cut can lead to excessive blood loss.

What are bleeding disorders?

There are four distinct phases in hemostasis which is geared to stop blood loss. 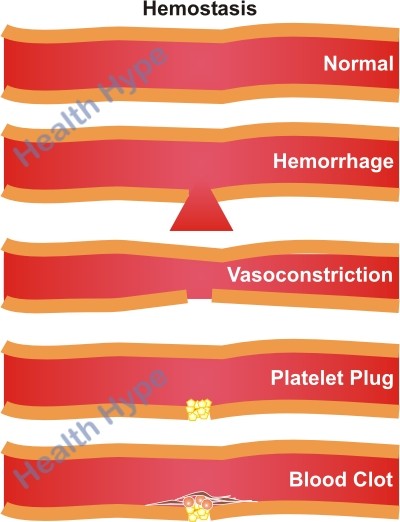 The focus is often on the clotting phase which is a complex multi-step process involving several factors. Due to the complexity of this phase and participating components, it is open to a number of defects and disturbances. However, some bleeding disorders may also involve the platelets, carrier proteins and blood vessel abnormalities. Most of these disorders are inherited and present from birth (congenital) although some may be acquired in life and arise secondary to a pre-existing disease.

The two most common bleeding disorders in von Willebrand disease and hemophilia.

Hemophilia is a deficiency of one of the clotting factors involved in the coagulation cascade that eventually leads to the formation of a blood clot. Hemophilia A and B mainly affects males. There are three different types :

Thrombocytopenia purpura (TP) is due to a deficiency of circulating platelets, the cell particles that are essential for the formation of a platelet plug and contribute to blood clotting.

Blood vessel wall abnormalities where there is a weakening of the wall which will easily tear or rupture. These conditions are rare and includes :

Women may report prolonged or heavy menses. Recurrent and prolonged nosebleeds, bleeding in the gut which leads to blood in the stool, blood in the urine and bleeding gums are other characteristics signs of bleeding disorders. Depending on the extent of blood loss, patients may exhibit signs of anemia such as paleness, breathlessness, easily fatigued upon even slightest physical activity and constantly tired.