Redness of the eye, or ocular redness, is a common ailment that may be a symptom of some ocular or even non-ocular disorder or can arise acutely with minor irritation or injury of the eye. It is often accompanied by itching. On its own, excessive redness of the eye is not serious particularly if it passes within a short period. However, redness of the eye associated with eye pain, swelling of the eye or eyelid or visual disturbances needs to be investigated further.

The outer fibrous layers of the eye is composed of the central transparent portion known as the cornea which protrudes slightly from the surface of the eye ball. The sclera is the remaining outer portion which is commonly referred to as the ‘whites’ of the eye. Over these layers, at the front of the eye which is exposed to the environment when the eyelids are open, is a thin transparent mucous membrane known as the conjunctiva.

How does a red eye occur?

Redness of the eye is a result of vasodilation. This means that a blood vessel widens when the muscles in its wall relaxes and more blood flows through it. Normally the redness associated with blood is not visible or only slightly so. However, with vasodilation, the redness becomes prominent.

The sclera itself has limited blood vessels while the cornea has no independent blood supply. These structures therefore derive its blood supply from the underlying uvea (iris, ciliary body and choroid). The blood vessels of note associated with redness of the eye is the conjunctival vessels, specifically the posterior conjunctival vessels which lie more superficially. These vessels are closely associated with deeper lying blood vessels like the anterior ciliary arteries which can also cause redness when dilated.

Vasodilation is associated with the process of inflammation. Certain inflammatory chemicals causes blood vessels to dilate and for the vessels to become more leaky. While this is intended to help the immune system respond more rapidly to any invading pathogen, it does lead to symptoms such as redness and swelling. Therefore red eye is almost always associated with inflammation, be it due to injury, infection or other causes. The terms ‘red eye’ and ‘pink eye’ are sometimes used interchangeably. Red eye refers to any cause of redness while the term ‘pink eye’ is reserved for redness and inflammation associated with viral infection (viral keratoconjunctivitis).

The eye, despite being white, does have some tinge of redness which is most noticeable at the corners of the eye (canthi). Even the slightest irritation of the eye can cause rapid vasodilation and redness. This quickly subsides once the offending agent is removed. However, when the redness is excessive and persists for a period of time then it needs to be assessed further especially if it is accompanied by other eye symptoms.

Redness of the eye is a common feature of inflammation due to any number of causes. This is most prominent when it affects the outer layers of the eye like the cornea (keratitis) or sclera (scleritis). These structures are coated by thin layers known as the conjunctiva (conjunctivitis) and episclera (episcleritis). Redness may also originate from the deeper structures, particularly the middle layer of the eye (uvea) which comprises the iris, ciliary body and choroid (inflammation ~ uveitis). 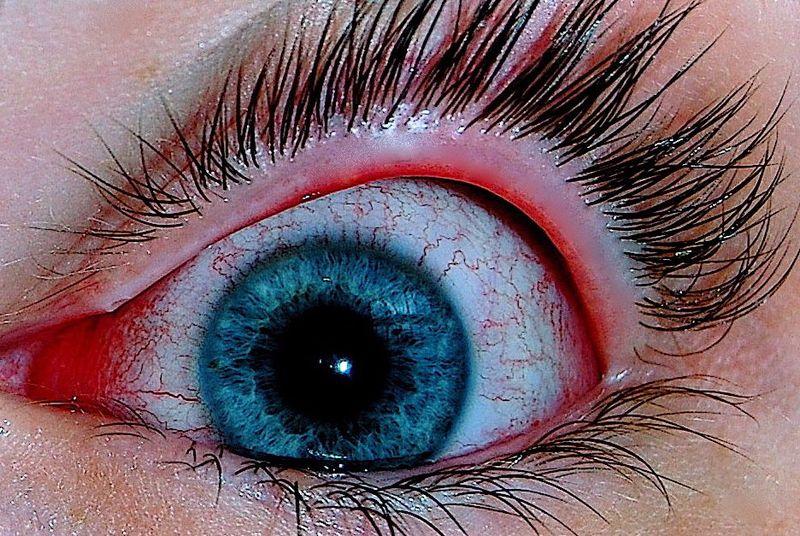 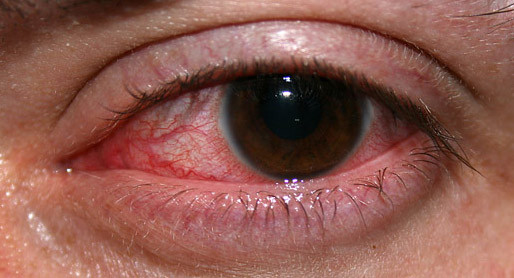 Dryness of the Eyes

The lacrimal glands which secrete lacrimal fluid (commonly known as tears) ensures that the part of the eye exposed to the environment is constantly moistened. This is further assisted by the action of the eyelids and regular blinking. Oily residue from the meibomian glands of the eyelids and mucus further assists with preventing dryness. If there is a lack of lacrimal fluid or conditions that cause excessive drying of the eyes, then redness of the eye may set in. Eye dryness which is of medical significance is termed ketaroconjunctivitis sicca. It may be seen with :

The lacrimal apparatus may also be inflamed in conditions such as canaliculitis and dacryocystitis which may be due to infections. This may also contribute to redness of the eye.

The mechanism of injury can vary significantly. Some of the common causes of trauma to the eye that may lead to redness includes :

A subconjunctival hemorrhage causes severe redness of the eye due to rupture of a blood vessel with coughing and straining.

Allergic reactions may also occur with the use of cosmetics particularly eye makeup. This reaction is known as contact conjunctivitis. Some patients may also react to contact lens, particularly cheap cosmetic lenses, which may not be manufactured according to regulatory specifications.

Eye infections may be due to bacterial, viral, fungal or parasitic infections. It is more likely to cause redness when it affects the cornea, conjunctiva, sclera, episclera and/or uvea (choroid, ciliary body and iris). When the eyelids are affected, it is known as blepharitis. Viral conjunctivitis is frequently seen in outbreaks (“pink eye” / epidemic keratoconjunctivitis) particularly among children.

Most infections affect the more superficial layers – cornea, conjunctiva, sclera or episclera. Deeper lying infections involving the uvea or other intraocular structures may be seen with progressing superficial infections that are untreated, after eye surgery, with severe eye trauma or related to orbital cellulitis.

Ocular inflammation is largely due to allergies, infections and trauma. However, other inflammatory conditions may also be a cause for eye redness. This may be due to systemic diseases that later also affect the eye and is most prominent with autoimmune conditions like rheumatoid arthritis, scleroderma, Sjogren’s syndrome, and other metabolic and genetic diseases.

Eye strain is a common cause of excessive redness of the eye. It is frequently seen after long periods of staring or gazing at a fixed distance particularly when reading, using a computer screen, television viewing and so on. It is known as asthenopia and is associated with eye dryness and straining of the ciliary muscles that control the lens. These factors irritate the eye and while there is no prominent inflammation, eye redness along with tearing are the common presenting features.

Red eye associated with conditions that affect the tissue within the eye may be seen in glaucoma, particularly acute angle-closure glaucoma, foreign bodies within the eye after intraocular surgery, hypersensitivity to artificial lens used to treat a cataract and intraocular infections.

Treatment options depends on the causative factor. However, a large number of cases of excessive eye redness are not due to any pathological cause. It does not require treatment but due to the cosmetic aspects associated with eye redness, patient may desire symptomatic treatment.

A range of eye drops are available for :

These eye drops should not be used as far as possible. Instead preventative measures should undertaken to avoid redness of the eyes in cases that are not caused by any disease.

Take note of other eye symptoms such as eye pain, visual disturbances, excessive tearing, swelling of the eye/eyelid and any loss of vision. Seek medical treatment as soon as possible and do not attempt to self-medicate or manage the condition at home. Consult with an opthamologist or other medical professional as soon as possible.