We always hear about how we drink too little water in modern societies and that many people are dehydrated due to inadequate water intake. This is further compounded by a modern diet consisting of diuretics including caffeinated beverages like colas and coffee, as well as alcohol, which causes us to lose water. While it is important to drink sufficient water in a day, it can also be dangerous to drink too much of water. It is a classical example of the age old saying that “too much of a good thing can be bad for you”.

What is water intoxication?

Water intoxication or water poisoning is the biochemical disturbances that occur within the body by drinking excessive amounts of water (overhydration). Apart from the quantity of water that is consumed, the period of time over which it is consumed is also an important factor. Drinking large amounts of water in short periods of time is the greater danger as the body’s regulatory mechanisms cannot cope.

Normally the body has to maintain a certain water and electrolyte balance. Various mechanisms come into play to maintain homeostasis and pass out the excessive fluid through the kidneys in the form of urine. In water intoxication, the kidneys cannot pass out fluid fast enough and it accumulates in the system to disrupt the water and electrolyte balance which can lead to serious and even fatal outcomes.

How much of water is dangerous?

The quantity of water that leads to overhydration depends on the individual’s level of activity, climate and the duration of time over which the water is consumed. People who are active or live in a hot environment will be tolerate larger quantities of water. As a general rule, a person should not drink more than 4 liters (approximately 135 ounces) in a 24 hour period but the dangerous level is consuming more than 6 gallons of water per day repeatedly¹. This is the maximum capacity that healthy kidneys could pass out excessive fluid.

However, this maximum kidney activity to expel the fluid cannot be maintained indefinitely. It may also be possible for a person to drink much less than 4 liters and experience water intoxication over a long period of time. This is largely due to kidney health. A person with impaired kidney function or pituitary abnormalities may find that the kidney cannot pass water fast enough. Water is therefore retained and disturbs the electrolyte balance much sooner and even with the intake of normal levels of water.

Hyponatremia (low sodium levels of the blood) is a consequence of drinking too much water. Sodium is an important electrolyte that is needed for various purposes including the activity of nerves and muscles, as well for regulating blood pressure and fluid volume within the body. Although the body will try to retain sodium, in the event of excessive water consumption this sodium is lost is urine and remaining sodium in the body is heavily diluted.

Excess water in the body that cannot be excreted fast enough has to occupy space. It can increase the blood volume and then seep into cavities like the lungs or tissue spaces as is seen in swollen legs, or it can enter the cells causing the cells to swell and not be able to function normally. This waterlogging of the cells arises from the difference in the osmotic gradient between the inside of the cell and fluid outside of the cell. 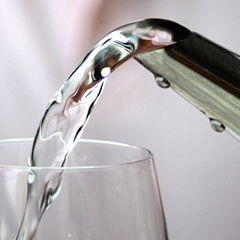 The dangers of excessive water intake are often more severe when a person is dehydrated and then rapidly rehydrated. The body cannot cope with the sudden influx of fluids and electrolytes. Rehydration must be done gradually or it can at times be as dangerous as dehydration. Therefore people who are severely dehydrated should be rehydrated within a hospital setting with the use of an isotonic solution.

In severe cases there may be confusion, seizures and even loss of consciousness which can resemble intoxication with other substances. Diarrhea, nausea and vomiting are symptoms of hyponatremia which may also be present in water poisoning.

It may be simple to spot overhydration even before the symptoms water intoxication and hyponateremia develops. The level of hydration can be assessed by the color of urine. When a person is sufficiently hydrated the urine color is light yellow to a mustard yellow in color.

Treatment of Overhydration and Water Intoxication

The main approach to treating overhydration and water intoxication is to restrict fluid intake. This may involve restricting fluid intake to a maximum of 1 liter (33 ounces) per day. It will take a few days for the water and electrolyte levels to stabilize. However, at times it may be necessary to restrict sodium as well and also use diuretics or other drugs. This should only be done if prescribed by a doctor.