What is a liver fluke?

Liver flukes are a type of parasitic worm (helminth) that lives in the liver. Flukes are the term for a type of parasitic worm known as trematodes (flatworms). There are many different types of flukes and the liver fluke is just one type. Furthermore there are several different species of liver flukes. The species that most commonly affects humans is Fasciola hepatica. It is also known as the sheep liver fluke but also infects cattle. Another species that can also infect humans is Fasciola gigantica.  For this reason, liver fluke infection with these species is known as fascioliasis.

The Fasciola hepatica fluke is among the largest of the flatworms. It reaches a length of about 30mm (just over 1 inch). Infection in humans does not only occur among meat eaters. The larvae can attach to freshwater vegetables and herbs and then enter the body when these plants are consumed raw. The worm cannot be spread from one person to another. The symptoms of fascioliasis are usually mild and non-specific but it can cause serious disease in some people.  It is also possible for the worm to migrate to sites outside of the liver like the skin, heart, lungs and brain although this is not common. 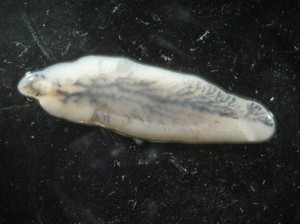 How common is it?

Overall a liver fluke infection is rare in the United States. Most cases in the US are seen among immigrants who come from endemic regions. Fasciola hepatica is found throughout the world except Antarctica while Fasciola gigantica is isolated to some tropical regions. However, most cases of fascioliasis are found to occur in developing nations and parts of Western Europe. Males have a slightly higher risk of being infected. The prevalence varies but in countries like Bolivia the rate is higher than 65%. The infection does not have a predilection for race or age, although the majority of people that are infected are adults.

Spread of Liver Fluke to Humans

Fasciola hepatica and Fasciola gigantica infect both sheep and cattle. However, these animals are not required for the parasite to be transmitted to humans. In fact people are infected accidentally through consuming certain raw freshwater plants. A type of fascioliasis can however be acquired through eating the raw livers of sheep, goat or cattle. Since this practice is rare, the main mode of transmission is through consuming plants like watercress, water lettuce, mint and parsley.

It is important to understand the life cycle of the liver fluke when looking at the spread of these worms.

Adult fluke worms can live for years within the hepatic and common bile ducts. It survives by feeding on the host liver cells (hepatocytes) and epithelium of the duct wall. It can produce tens of thousands of eggs in its lifetime.

Fascioliasis presents with non-specific symptoms that are usually mild. In half of all cases these symptoms are not clearly indicative of fascioliasis. Most chronic infections are asymptomatic, meaning that there are no symptoms present. The infection is diagnosed by the presence of eggs (ova) in the stool. Blood tests are not conclusive for this specific infection. Imaging studies like an abdominal ultrasound and CT scan may reveal the burrow tracks of the worms in the liver tissue. 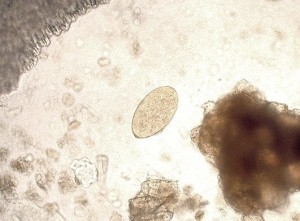 The signs and symptoms of fascioliasis include:

Hives (urticaria) has also been observed in about 20% of cases. Other symptoms like dizziness and sweating may also occur with fascioliasis although this is mainly seen in children. Nodules under the skin (subcutaneous) and wheezing may occur when the worms are lodged in other organs.

Liver fluke infection can be easily prevented and effectively treated. People living in endemic regions need to be informed against risky behavior and about the symptoms for early diagnosis. Although the infection cannot be transmitted from one person to another, it is likely to occur in families since members are consuming the same contaminated food.

How to prevent liver flukes?

How to eradicate liver flukes?