The female breasts, or mammary glands, are the modified appendages lying on the anterior chest wall. It is present in males as well but in most men, it is not as prominent as it is in females. The female breast has a role in both nourishing the offspring as well as offering immunological protection to the newborn baby. To some degree, the breast also has a psychological function in that it is associated with sexuality. Underdeveloped breasts or partial or complete removal, which may be necessary to treat certain diseases like breast cancer, may cause significant emotional distress.

Function of the Breasts

The breast produces milk which serves to nourish the infant. It provides complete nutrition for the newborn baby and contains carbohydrate (lactose), fats and proteins as well as micronutrients. In the first few days after delivery (as well as the first few days before), the breast secretes colostrum which is similar in composition to breast milk except that it has very little fat.

Apart from nutrition, the breast secretions also ensures that the newborn has a  significant amount of immunological protection. This is in the form of maternal antibodies, chemical mediators, vitamins and enzymes. These immune components augments the infant’s immature immune system and provides protection against infections. It also prevents certain allergies and autoimmune diseases to some extent

Anatomy of the Female Breasts

Parts of the Breast

The breast is somewhat circular in shape. It is broadly composed of  the overlying skin, areola, nipple and underlying breast tissue (stroma). The stroma in turn can be divided into interlobular stroma, which is the connective tissue and fat which structurally provides size, protection and support to the breast, and the intralobular stroma which contains the functional tissue.

Internal Structure of the Breast

Milk is produced in the multiple alveoli (acini) that make up the 15 to 20 lobules of the mammary gland. The milk drains out through the terminal ducts into the lactiferous duct. It accumulates in the lactiferous sinus until it is expelled through the nipple. The entire lactiferous duct and the lobules are lined with luminal epithelium cells but only these cells in the lobules produce milk. Under the epithelium lie a muscular epithelial layer known as the myoepithelium. The muscle cells in this layer contracts and helps to eject the milk.

Picture of the Breast Structure

The areola is the circular area that surrounds the nipple. It is slightly raised above the skin surface and contains many sebaceous glands. The sebum secreted by these glands lubricate the areola and nipple which are prone to chaffing during breastfeeding.

Deformities of the nipples are discussed under Abnormal Nipples.

The base or bed of the breast is formed by the fascia that covers the pectoralis major and minor muscles (about tow-thirds) and the fascia of the serratus anterior muscle (about one-third). The breast runs from the second rib at the top (superiorly) to the sixth rib at the bottom (inferiorly) although larger breasts and the lactating breast may extend further down. The underlying tissue that makes up the breast is attached to the overlying skin by suspensory ligaments (also known as Cooper’s ligaments or suspensory ligaments of Cooper). 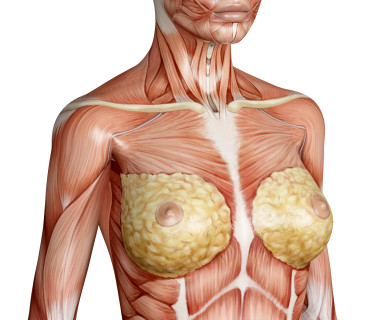 Picture of the Anatomical Position of the Breast

Blood Supply to the Breast

Blood is drained from the breast (venous blood) through the  following veins :

Lymphatic Drainage of the Breast

The lymphatic drainage of the breast is fairly complex and may vary slightly. It is an important anatomical consideration because of its role in the spread of breast cancer (metastases of cancer cells). Most of the lymph from the breasts drains into the axillary lymph nodes via the anterior or pectoral nodes although some may drain directly into the axillary nodes.

A plexus of lymph vessels known as the subareolar lymphatic plexus drains lymph from the nipple, areola and lobules of the breast. Lymph from the skin of the breast drains into the parasternal lymph nodes through other nodes.

Nerves of the Breast

The nerve supply to the breast is from the fourth, fifth and sixth intercostal nerves via the anterior and lateral cutaneous branches.