Atherosclerosis cause plaque formation within the artery and blood clots (thrombus or embolus) may affect both the artery and vein, although it is more likely to occur in the vein due to slower blood flow.

The femoral artery enters while the femoral vein leaves the thigh just under the inguinal ligament. It lies quite superficially at this point in an area known as the femoral triangle. This is a common site for surgeons to enter these vessels for a number of intravascular surgical and diagnostic procedures.

This is a triangular landmark lying just below the inguinal ligament. It is formed by the following surrounding structures :

Within the triangle lies the following structures from lateral (outer) to medial (inner) : 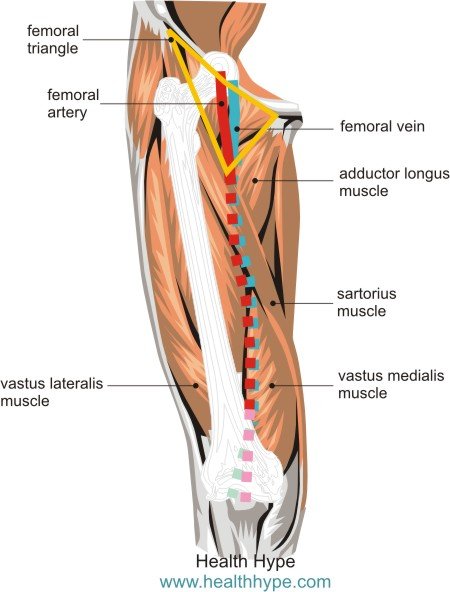 What is the Femoral Artery?

The femoral artery is the main blood vessel that carries oxygen-rich blood from the heart to the lower limb. It is a continuation of the external iliac artery, which is the more superficial branch of the common iliac artery that arises as a bifurcation of the abdominal aorta. 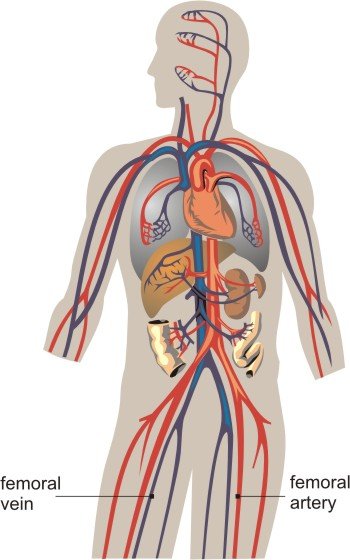 What is the Femoral Vein?

The femoral vein is the main blood vessel that carries oxygen-deficient blood out of the lower limb and back to the heart. It is a continuation of the popliteal vein and becomes known as the femoral vein proximal to the adductor hiatus.