What is fish poisoning?

Fish poisoning is any illness caused by toxins consumed in seafood, either fish or shellfish. Some of these toxins may be found in just about any food, be it meat, fruit or vegetables. But seafood may also contain specific toxins that cause illnesses when consumed by humans. This is known as marine toxins. Many of these toxins are heat stable and cannot be destroyed during the cooking process. Therefore it can cause an illness whether the contaminated fish is eaten raw or well cooked. These toxins do not arise from the fish itself but rather from the micro-organisms that accumulate within it.

The reason why fish poisoning is often considered separately from other types of food poisoning is that some cases are potentially life threatening. Death can result as quick as 24 hours after eating the contaminated seafood. Even if death does not occur, there are types of fish poisoning that can lead to permanent loss of short term memory and even brain damage. Therefore fish poisoning should not be taken lightly. Contrary to popular belief, fish poisoning does not only occur with poisonous species. Even widely available and commonly eaten fish can cause poisoning if the toxins within it are sufficiently high to affect humans.

There are host of food infections that can cause illness in humans. Some of these may cause food poisoning by the way of the toxins produced by the causative organisms. However, fish and shellfish poisoning refers to:

These are not the only type of fish poisoning but stand out due to the prevalence among poisoning with contaminated seafood. Most have the potential to be life-threatening as well.

Dinoflagellates are found in larger populations within tropical waters and is particularly concentrated in red tide. The region where these fish are caught is therefore an important factor as to whether it can cause ciguatera poisoning or not. For Americans, it is the following fish that is caught in areas such as Florida, Guam and neighboring islands, Hawaii, Puerto Rico and the Virgin Islands that may be a problem: 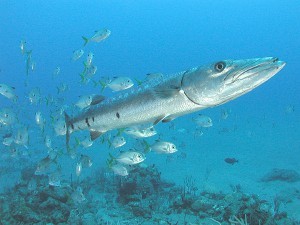 Picture of a barracuda

Scombroid or scombrotoxic poisoning occurs with eating certain fish that have high levels of a substance known as histamine as a result of being contaminated with bacteria. When these bacteria spoil the fish, it breaks down the fish protein and leads to the production of histamine and substances which block histamine removal. In other words a person may be consuming large amounts of histamine, a chemical mediator of inflammation that is often associated with allergic reactions.

A number of different bacteria can cause this histamine accumulation in the fish. It occurs after the fish dies and depends on how soon the fish is refrigerated or frozen after being caught. A longer time between death and refrigeration/freezing increases the chances of bacteria breaking down the fish flesh. This type of poisoning is more likely to occur with certain fish species, particularly: 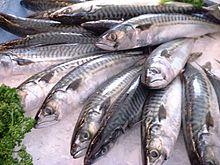 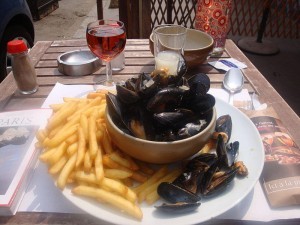 The following symptoms may be seen in most types of fish and shellfish poisoning:

In addition the following symptoms may be specific to certain types of fish poisoning.

Symptoms start with 30 minutes to several hours after eating the contaminated fish, and resolve within 1 to 4 weeks.

Symptoms start with a few minutes to 2 hours after eating the fish, and resolves within several hours.

Symptoms start around 2 hours after eating the contaminated shellfish, but can be as soon as 15 minutes or as delayed as 10 hours.

In severe cases death can occur anywhere from a few hours to a day after the onset of symptoms.

Symptoms start around 1 to 3 hours after consuming the contaminated seafood and resolve around to 2 to 3 days thereafter.

Symptoms start around 24 hours after eating the contaminated shellfish.

Death may occur in severe cases.