What is foreign body aspiration?

Foreign body aspiration is a medical emergency that arises when an object enters the airways. Depending on the size of the object, either a solid or semi-solid, it may obstruct the airways. A significant or complete obstruction can be life-threatening within minutes. Smaller objects may lodge in the tract, causing inflammation and increasing the chances of infection. Although children are the highest risk group, foreign body aspiration can affect any age group. Foreign body aspiration in young children is largely due to purposely swallowing large or inedible objects, whereas with adults it primarily due to throat problems, use of sedatives and an impaired gag reflex.

A foreign body may be lodged in the larynx, trachea or bronchi. Fluid or semi-solid material may pass into the lungs. The bronchi are a common site where a foreign body may lodge. In children it can lodge in either bronchi. In adults, however, the right bronchi is more commonly affected because the angle difference between both the right and left bronchi differs. The path between the trachea and lung is straighter down the right bronchus and it is therefore a more commonly affected site. The exact location of the foreign body needs to be identified with diagnostic investigations such as an x-ray, CT scan or bronchoscopy.

The epiglottis normally closes the entrance to the airways during swallowing. In the event that an object can bypass the epiglottis and enter the airways, there can be a number of consequences :

Larger objects which block the upper parts of the airways has the most devastating consequences in a short period of time. It can sufficiently obstruct the airways to lead to suffocation (asphyxiation). Smaller objects that can move lower down the airways may obstruct only a small portion of the airways, allowing for compensatory measures to prevent asphyxiation.

If the object passes into the bronchi, then only one bronchus may be obstructed. The lung of the affected side may not be able to exchange gas as required for normal ventilation but the other lung may compensate for the body’s needs. However, even in these instances, the blocked portion of the airway may become inflamed and there is a higher risk of infections. This can become chronic and lead to severe damage of the airways.

Furthermore inflammation also narrows the airways by causing swelling of the airway walls. This further exacerbates the problem in a partial obstruction, and possibly even leading to complete airway obstruction. 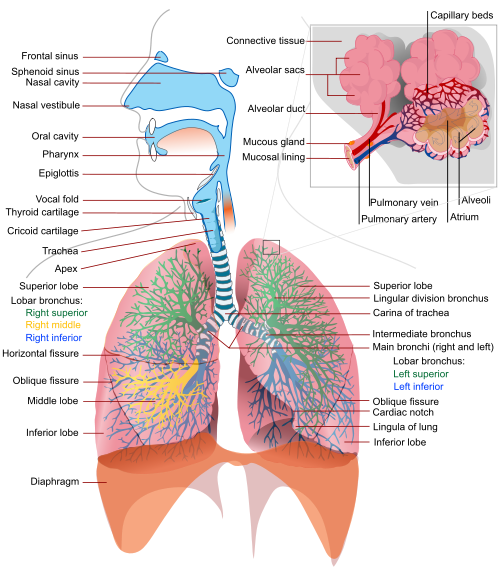 Picture of the respiratory tract from Wikimedia Commons

Symptoms of a Blocked Airway

Death may ensure within minutes if there is total airway obstruction and medical attention is not forthcoming. In cases where the object does not significantly obstruct the airway and remains for within the respiratory tract for long periods, then signs and symptoms may vary. These symptoms are largely due to bronchitis, bronchiectasis and/or pneumonia.

With infants and younger children usually under 3 years of age, the biggest risk are small toys, large pieces of candy, hard fruit and nuts. Edibles are often not chewed fully before swallowing. Among adults, food is the main cause of foreign body aspiration followed by a dislodged tooth. Dental applications and medical instruments are also possible objects that may be aspirated.

Although the symptoms and history may clearly indicate foreign body aspiration, it is important to undertake various diagnostic investigations if the patient is stable. This will allow the physician to isolate the site at which the object is lodged and assess the damage to the airway prior to undertaking removal of the object. However, with asphyxiation, immediate medical treatment is needed often without any diagnostic investigations.

Removal of a Foreign Body

The foreign body should be removed as soon as possible. The first steps, that do not need medical personnel, includes the Heimlich maneuver and blows to the back. Abdominal thrusting is another effective measure although most people are cautious about performing it.

When these measures fail to dislodge the foreign body, then it has to be removed through bronchoscopy. This is done by a medical doctor, and preferably by an otorhinolaryngologist (ENT/ear-nose-throat specialist). Almost all foreign bodies can be removed with the use of bronchoscopy because most objects remain lodged within the airways.

However, if the aspirated material is semi-solid, dissolves or is crushed and moves into the terminal bronchioles or lungs, then other measures need to be considered. Surgically opening the airway to physically remove the aspirated object (bronchotomy) or removal of part of the lung (segmental resection) are rarely needed for foreign body aspiration.

The video above shows the removal of a portion of a denture lodged in the airway with the use of a rigid bronchoscope.

Sometimes small particles from the foreign body, or even very small foreign bodies that cannot be identified on imaging studies, remain in the airways and lungs. Here it causes localized inflammation and increases the chances of infections. Therefore hospitalization may be necessary even if the foreign body is removed. Treatment may be ongoing for weeks or months thereafter depending on the development of complications.