What is gallbladder mucocele?

The gallbladder is a hollow sac that stores bile containing wastes and fats among other substances that need to be evacuated from the body. Normally this bile is secreted when a person eats food and digestion is occurring in the duodenum, the first part of the small intestine. Since bile has an emulsifying property, it is useful for breaking down the oils and fats in a fatty meal. By doing so, other digestive enzymes can act on the fats to break it down further and allow for the body to absorb it from the gut.

Bile is produced throughout the day. The gallbladder can store as much as 1.5 liters (about 50 fluid ounces) of bile by drawing water out of the bile in the gallbladder. This concentrates the bile but also helps to reduce the space occupied in the gallbladder. The water can be added at a later stage just before the bile empties out into the duodenum. The gallbladder has a fairly thick wall which can stretch to a very large degree thereby allowing for a large quantity of bile to be stored if necessary. 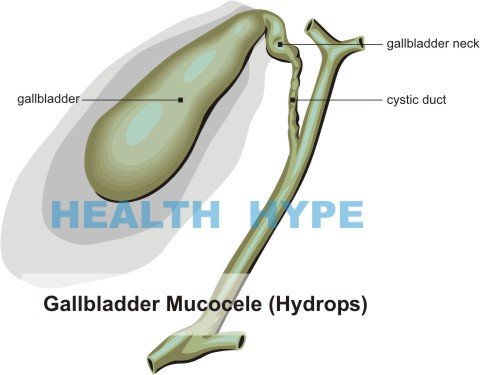 Blockage in the Gallbladder

There are a wide range of causes of a mucocele. Most of these block the gallbladder outlet although some may arise when a person is not eating which does not stimulate the release of bile. There are other unique causes seen almost only in children and babies.

These other conditions are less likely to cause a gallbladder mucocele but it is still a possible factor that needs to be considered.

The symptoms of a mucocele are non-specific and many other types of gallbladder disease and conditions of related organs may present in a similar way.

The symptoms alone may not be indicative of a gallbladder mucocele. The presence of a large palpable mass extending sometimes as low as the pelvis along with a history of gallbladder disease and absence of fever and chills may raise the suspicion of a mucocele. However, further testing is usually needed to visualize the gallbladder. This includes :

There is no medical treatment for a gallbladder mucocele. Medication is of little use although any underlying causes need to be treated and managed appropriately. Gallbladder obstruction, with or without a mucocele or empyema, requires surgical removal. This procedure is known as a cholecystectomy.

There are two methods by which a gallbladder can be removed.

Although laparoscopic surgery is the procedure of choice as it is minimally invasive and has fewer complications, it may not always be ideal for a very enlarged gallbladder. The choice of procedure is dependent on the individual case. Removing the gallbladder usually provides total resolution of symptoms and has an excellent outcome. However, this is dependent on whether complications had already arisen or not prior to surgery.