What is gastric outlet obstruction?

Normal movement of food through the stomach

Food and fluid enters the stomach from the esophagus through the top of the stomach known as the cardia. It is then mixed with stomach acid and digestive enzymes. Strong muscular contractions of the stomach churns the food with these enzymes. This assists with chemical digestion but also helps break down the food into smaller pieces as part of mechanical digestion. Eventually it is transformed into semi-solid mixture which is then pumped out of the stomach through the pylorus. Larger solids remain behind in the stomach until it is broken down further.

Blockage in the stomach opening

When the outlet of the stomach is blocked, this semi-solid mixture known as chyme cannot be pumped out of the stomach as easily. The obstruction to outflow coupled with the strong stomach contractions can push the chyme upwards into the food pipe and mouth. Therefore a person presents with vomiting in gastric outlet obstruction. This may not be constant and is dependent on what a person eats. Fluids are better tolerated as it can pass around the obstruction to empty into the duodenum (first part of the small intestine). Solid foods are usually the problem.

Serious consequences of a blocked stomach

As the condition progresses, weight loss may become noticeable. In the late stages when the condition is severe, a person may also suffer from malnutrition as insufficient food is consumed. Food that may accumulate and take long periods to pass out of the stomach causes the stomach to stretch. In the process the stomach loses its ability to contract strongly when it is filled with foods. The stomach then has even greater difficulty in pushing partially digested food into the duodenum. This can pass out backwards and even empty into the lung. 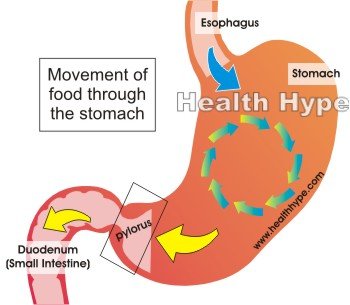 The blockage may classified as intrinsic or extrinsic. Although the term gastric outlet obstruction refers to the stomach, sometimes the cause of the obstruction is located within the small intestine and hampers the exit of the stomach contents.

An intrinsic blockage is where the obstruction lies inside the stomach or duodenum. This may include masses and lesions which cause narrowing within the stomach and duodenum such as polyps and ulcers.

An extrinsic blockage is where a mass or enlargement of an organ lying around the stomach and duodenum compresses and narrows the stomach outlet. This is seen mainly in tumors of the pancreas and gallbladder.

The causes of gastric outlet obstruction can be broadly classified as benign (non-cancerous) or malignant (cancerous).

This category includes all the non-cancerous causes of gastric outlet obstruction.

Cancers in and around the stomach are the main reasons for gastric outlet obstruction after peptic ulcer disease (PUD). This includes :

The early symptoms where the partial blockage does not significantly hinder movement of food out of the stomach will cause little to no symptoms. A person may not be aware of the condition in these cases. The initial symptoms are largely due to delayed gastric emptying. However, as the obstruction progresses then the symptoms become severe often linked to the complications of gastric outlet obstruction.

Once symptoms become evident, a person with gastric outlet obstruction may present with :

As the condition worsens, then additional symptoms may be noticed in addition to the early symptoms.

The patient’s medical history and findings of a clinical examination may be sufficient to make a preliminary diagnosis of gastric outlet obstruction. However, further tests are needed to confirm the diagnosis and to isolate the cause. The main route for investigation involves various imaging studies like an x-ray or upper gastrointestinal endoscopy. Blood tests may assist with monitoring the complications like changes in blood chemistry.

An x-ray is usually the first imaging study that is conducted which reveals a possible obstruction. The stomach appears distended as food accumulates in it and sometimes the stricture (narrowing) may be visible especially if it is calcified.

A barium meal, also known as a barium swallow, is one of the preferred methods of conclusively identifying an obstruction. By swallowing a solution known as barium sulphate, the stomach, duodenum and obstruction can be highlighted on a x-ray. It will not necessarily assist in identifying the cause of the obstruction.

An upper gastrointestinal (GI) endoscopy is the preferred method of confirming an obstruction and even identifying a possible cause. A thin flexible tube with a camera and light source at the end is inserted through the mouth, down the esophagus and through the stomach to the site of the obstruction. It will not only allow for visualization of the obstruction but a tissue sample (biopsy) can be taken and analyzed further. 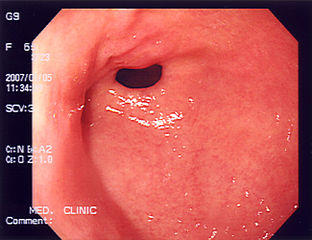 Gastric outlet obstruction usually needs to be treated surgically if it does not resolve within a few days.

Medication offers little benefit in gastric outlet obstruction. Drugs to speed up movement through the upper gut, known as prokinetics, should not be used. Acid-suppressing drugs like proton pump inhibitors and H2-blockers may be helpful in reducing the irritation to the stomach and duodenum. This will help ease swelling of the area and allow it to heal in the case of peptic ulcer disease. Supportive treatment is crucial in severe cases. An IV drip can help with dehydration and a nasogastric tube will aid with removal of the stomach contents.

There are several surgical procedures that may be considered depending on the severity of the obstruction, underlying cause and other complications. These procedures include :