What Is The Heart

The heart (in Latin cor; in Greek kardia) is a muscular organ that pumps the blood through the vessels, supplying the body cells with oxygen and nutrients. Together with the brain, the heart is the center of one’s personality and emotional life.

Location of the Heart

The heart lies in the middle of the chest, between the right and left lung, behind and slightly to the left of the breastbone (Picture 1).

The heart is a hollow muscular organ, about the size of your fist and the shape of a pear, with a wide base above and a cone shaped apex below. It lies in a fibrous sac, known as the pericardium. The heart consists of the muscular wall and four chambers: above, there are the right and left atrium, that collect the blood from the veins, and below, there are the right and left ventricle, that expel the blood into the aorta (Picture 2). Atria are separated by the interatrial septum, and ventricles by the interventricular septum. Backflow of the blood within the heart is prevented by four heart valves (Picture 2): 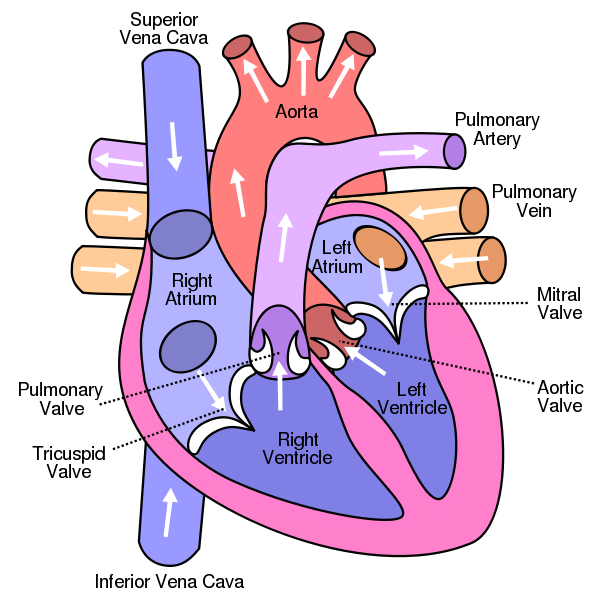 Two coronary arteries (CA), originating from the beginning of the aorta, supply the heart with oxygen and nutrients. The right coronary artery (RCA) supplies mainly the right side of the heart, and the left one (LCA) mainly the left side. 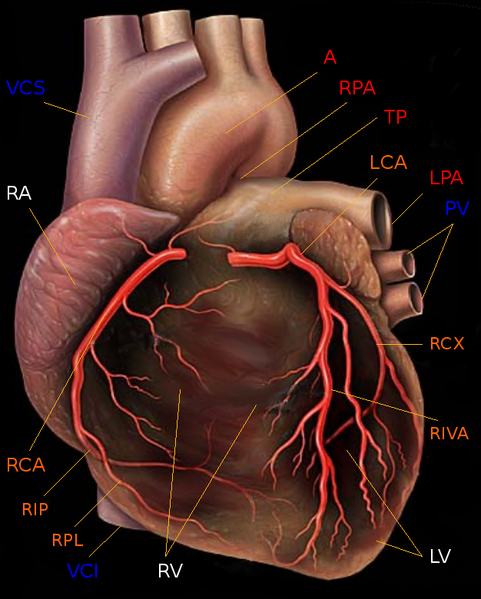 The heart muscle, medically called myocardium, is built from smooth muscle fibres that have an ability to contract by themselves, without being stimulated by the nerves. However, a cluster of specialized cells, called sinuatrial (SA) node, located in the wall of the right atrium, influences the contraction of all other heart muscle fibres. Being called a “natural pacemaker”, SA node triggers the contraction of both atria, what excites another node, located between the atria and ventricles – atrioventricular (AV) node, from where the excitement travels along the left and right bundle, located in the interventricular septum. At the apex of the heart, excitement spreads to the muscle fibres of both ventricles, which contract simultaneously (Picture 4).

Picture 4. Above: the spread of electrical impulse through the heart;
below: an ECG record of this spread
(source: Wikipedia.org)

A normal heart rate or pulse in a healthy adult at rest ranges from 60 to 100 beats per minute (bpm); it may be as low as 30 bpm at night or in trained athletes, or as high as 180 bpm during an exercise or strong emotions. Some drugs and disorders of the heart or other organs can also influence heart rate. The pulse can be detected manually on the sides of the Adam’s apple in the neck, on the inner, thumb side of the wrist and on some other locations.

The right atrium collects oxygen-depleted blood from the trunk and legs via inferior vena cava, and from the head and arms via superior vena cava. From the right atrium, the blood enters the right ventricle, from where it is pushed into the pulmonary artery and lungs. In the lungs, carbon dioxide (CO2) is released from hemoglobin in the red cells and being exhaled, and oxygen from the inhaled air binds to hemoglobin. Oxygen-rich blood flows via pulmonary veins into the left atrium and from there into the left ventricle. Contraction of the left ventricle pushes oxygen-rich blood into the aorta and arteries. The arteries are connected to a network of capillaries, where oxygen is being released from blood hemoglobin and picked by the cells, and carbon dioxide from the cells is bound to hemoglobin. Oxygen-poor blood from capillaries enters the veins from where it is pumped into the right atrium (see Video 1).

Apart from delivering oxygen to the cells and picking carbon dioxide from them, circulation enables:

Video 1. Circulation of the blood through the heart

During heart relaxation (Greek diastole), both ventricles are filled with the blood from the atria, and the atrioventricular valves close (the first heart sound). Then, contraction of the ventricles (Greek systole) expels the blood into the pulmonary artery and aorta, and pulmonary and aortic valve close (the second heart sound). The sequence of these events is known as a cardiac cycle. Then the ventricles relax again and new cardiac cycle starts. About 2.5 ounces (75 mL) of the blood is expelled into the aorta during each heart contraction (about 10 pints or 5 litres in a minute).

You can detect the heartbeat by placing the hand on the lower left part of the chest. Using a stethoscope, a doctor can hear the heart sounds and (abnormal) heart murmurs, and thus detect an eventual heart disorder.

Symptoms and Signs of a Heart Disease

It is not a single symptom or sign but their combination from which a heart disease can be suspected. Some of below mentioned symptoms may, apart in heart diseases, also appear in diseases of the lung, kidney, brain or other organs.

Symptoms of a heart disease:

Signs of a heart disease:

When to Visit a Doctor?

Prominence of symptoms may not necessary correlate with a severity of the disease. Mild symptoms may be caused by a severe heart disease (like short breath after heavy exercise), and prominent symptoms (fainting, fatigue) may appear in fairly healthy people. However, you should visit a doctor, when having any of above mentioned symptoms you can not explain.

In coronary artery disease, also called ischemic heart disease, deposits of fat and calcium (atherosclerosis) within your coronary arteries impede blood flow and hence oxygen and nutrient supply to your heart. When your heart muscle does not get enough oxygen-rich blood for proper function (the condition is called ischemia), you may feel a pain behind the breastbone, called angina pectoris. If one of your coronary arteries becomes completely blocked, a part of your heart muscle may die – this is called a heart attack or myocardial infarct, which can cause a sudden severe chest pain or even death.

Infective endocarditis (IE) mainly affects people with congenital or acquired disorders of the heart valves and implanted medical devices in the heart or vessels. IE may occur if microbes, like staphylococci or candida yeasts, enter the bloodstream, for example during tooth extraction. IE, if not treated, may result in a severe heart damage or death.

In cardiomyopathy, (a non-inflammatory disease of the heart muscle), a muscular heart wall either dilates and thins, or become thick, thus affecting its pumping ability. It may be inherited or acquired, and may develop suddenly, in few days, or gradually over several years. Causes include chronic abuse of alcohol or antidepressants, high blood pressure, thyroid disease, disorders of heart valves, infection, like flu, etc.

Irregular heart rhythm or arrhythmia is any hearth rhythm above 100 bpm (tachycardia) or below 60 bpm (bradycardia) in a resting adult, or any irregular rhythm pattern. Symptoms include fast or slow heartbeat, skipping beats, pounding heart (palpitations), fainting, chest pain, etc.

Pericarditis is an inflammation of the pericardium – a fibrous sac that covers the heart. Main symptom is pain behind the breastbone, changed by coughing; it may be relieved by sitting and leaning forward.

Congenital heart defects are abnormalities in the heart structure present at birth. They include: abnormal holes within the heart, displacement or narrowing of pulmonary artery or aorta, what impedes the blood flow or changes its direction. Some defects cause no symptoms and some heal on its own; others cause death shortly after birth or require surgical correction.

Sudden cardiac death is an unexpected death from a heart disorder occurring within an hour after symptoms onset in a person in whom no previously life threatening heart condition was diagnosed. Main underlying causes include coronary heart disease, previous heart attack or heart surgery, cocaine or tricyclic antidepressants abuse, digoxin, anti-arrhythmic medications and congenital birth defects.

Heart failure means your heart can not pump blood as it should; it does not mean that your heart has stopped. Heart failure may occur suddenly, for example, after a heart attack or during severe arrhythmia, or may develop slowly over the years. In left-sided heart failure, the left ventricle can not efficiently pump the blood from the lungs and toward the body; symptoms include shortness of breath and tiredness. In right-sided or congestive heart failure, the right side of the heart can not efficiently pump the blood from the veins and to the lungs; the main symptom is leg swelling.

In cardiogenic shock, which may follow a heart attack, arrhythmia or other severe heart disorder, a weakened heart is not able to pump enough blood to meet body needs. If not treated promptly, it is usually fatal. Affected person suddenly becomes drowsy, pale, breathes fast, has weakened but rapid pulse and low blood pressure. If you suspect, someone is in shock, call emergency (911 in US) right away. First aid in shock.