What are the Heart Valves?

The heart valves are sets of flaps (leaflets or cusps) that prevents the movement of blood against the direction of flow – from an atrium into a ventricle and then out into the artery (pulmonary artery or aorta).

There are two sets of valves :

There are two atrioventricular valves and two semilunar valves : 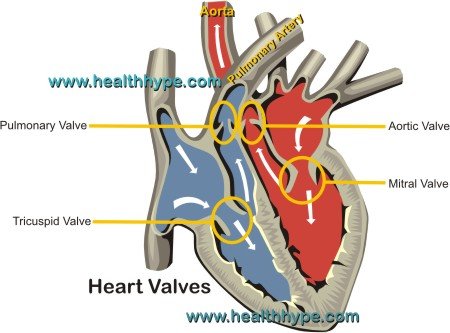 Function of the Tricuspid and Mitral Valve

These valves open and close passively. That means it opens when blood is being pushed from the atria into the ventricles by the force of the flowing blood. Similarly it closes when the blood under pressure in the contracting ventricles pushes against it.

The atrioventricular valves have a safety mechanism to ensure that it does not bulge excessively when closed. Papillary muscles attach to the vanes of the valve via chordae tendinae and contract when the ventricles contract. This provides resistance when the vanes of the valve extend into the atria. The papillary muscles and chordae tendinae do not open or close the valves but if it fails to act the then valves can turn inside out and not perform its function.

Function of the Pulmonary and Aortic Valves

The semilunar valves (pulmonic and aortic) perform the same function as the other heart valves – it prevents the backflow of blood but in this case from the arteries into the ventricles when the ventricles relax (diastole). These valves are subjected to greater pressure and have to be stronger than the AV valves.

The mechanism of action for the semilunar valves is different from that of the atrioventricular valves. These valves requires backflow of blood to close shut. Without backflow, these valves will remain open. The semilunar valves lack he chordae tendinae and papillary muscles of the AV valves.