The skeletal system is made up of some 206 bones in adults which provides form for the soft tissues of the body, protection and a hard lever structure for the muscles. Bones are much more than calcified masses that are present in various shapes and is living tissue just like any other part of the body. These are dynamic components of the body that are constantly undergoing resorption, renewal and remodeling to maintain its shape, structure and strength.

Bones develop in fetal life, first as a cartilaginous framework (anlage). This cartilage is subsequently removed while bone tissue is laid down concurrently (endochondral ossification) in most bones. A similar process known as intramembranous ossification occurs in flat bones. Bone itself is composed of an inorganic mineral component and organic matrix component. Blood vessels, nerves, cartilage and bone marrow that all interact with bone tissue may not be considered as bone but are essential for the formation and maintenance of bone tissue.

Types of the Human Bones

Bones are classified in several ways, the most popular of which being its shape and location. Despite the various differences in shape, bones are primarily considered to be long or short. In terms of location, there are two types of bones – axial and appendicular.

Structure of the Bone

The bone is made up of three components – mineral, matrix and bone cells. 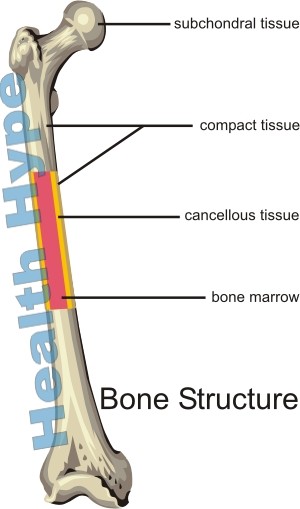 Bone mineral is the inorganic part of bone. It makes up the majority of the bone and is formed by calcium phosphate crystals deposited as hydroxyapatite.

The bone matrix is made up compact, cancellous and subchondral tissue.

The outer part of the bone is the hard compact tissue (dense bone)which surrounds the spongy inner cancellous tissue  (trabecular bone). The ends of the bones that are covered with cartilage are smooth and composed of subchondral tissue.

There are three types of bone cells – osteoblasts, osteocytes and osteoclasts.

It is often incorrectly thought that all bone activity with regards to resorption and renewal ceases in adulthood. This misconception often arises because bone continues to exist long after death despite the decay of most other tissue. Bone is a living tissue that is constantly undergoing remodeling irrespective of the age. It is only this remodeling that ceases with death. If it was not for this constant state of flux, bone would be unable to carry out its various functions throughout life.

Normally the rate of bone deposition (osteoblastic activity) and resorption (osteoclastic activity) are equal so that the weight of the bone remains constant. Osteoclasts release enzymes which consume the matrix and acids which dissolves some of the minerals. It then consumes this bone and releases these compounds into the blood. Small groups of osteoclasts constantly consume bone creating tiny tunnels in the bone. Osteoblasts then invade these tunnels and starts to lay down new bone until the tunnel is filled. Osteoblasts that are trapped within the bone are known as osteocytes.

Old bone becomes weak and brittle over time and if it was not for this constant remodeling it would not be able to maintain its structural integrity. This constant remodeling allows the bone to alter its strength and even the shape at some points to cater for changes associated with life. While the bone strengthens with increased compressional force, it can also weaken with reduced force. This may be seen when a person or even just one limb is immobilized.

Osteoblastic activity also serves to repair fractures. When a fracture occurs, new osteoblasts are formed in very large numbers over a short period of time from bone stem cells that are present on the surface of bone. These osteoblasts rush to the various sites of the fracture to start laying down new bone.

Despite the bone’s highly attuned mechanisms to absorb old bone and deposit new bone, this is not happening to the entire bone at any one time. Only about 1% of the bone is undergoing this change at the same time and the other 99% has to be maintained. This is achieved by the osteocytes which are essentially osteoblasts that are trapped within newly laid bone matrix.

Osteocytes form tunnels in the matrix known as canaliculi which allows for cytoplasmic protrusions from the cell to communicate with neighboring osteocytes. It is able to constantly maintain the bone around it  by exchanging mineral salts and can even alter the mineral levels of blood and tissue fluid. Once these osteocytes die, the bone matrix around it is quickly removed until osteoblasts can replace the bone and take the place of the osteocyte.