What Does “Immune” and “Immunity” Mean?

What Is Infection and Who Develops Infectious Disease?

Infection is an invasion of harmful microbes in the body. It depends on aggressiveness of microbes and our immunity, if a particular infection will cause a disease or not.
What Is Native Immunity?
Native or innate immunity is protection against infections as we have it at birth. It consists of antibodies we adopt from our mothers, skin, mucus in the respiratory tract, stomach acid, white blood cells and certain substances in the blood, which can, to some extent, prevent invasion of microbes into our bodies.

What Is Immune System?

Immune system is a network of immune cells, antibodies, certain substances circulating in the blood and immune organs (lymph nodes, spleen), which all together fight against microbes.

Immune cells are certain types of white blood cells, like lymphocytes and phagocytes, which circulate in the blood and are capable of killing microbes. Immune cells originate in the bone marrow, from where they enter the blood. Some lymphocytes temporarily enter the thymus, a small organ located behind the breastbone, where they mature and become able to kill microbes. Other lymphocytes do not kill microbes directly, but produce antibodies – special proteins called immunoglobulins (Ig). Antibodies can attach to microbes and destroy them. 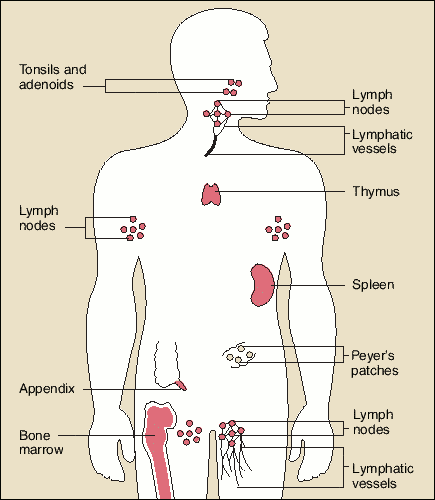 People with weak immune system (infants, some old people, patients without spleen or with chronic or immune diseases and those receiving chemotherapy or steroids) may suffer from frequent infections.

How We Get Resistant Against Certain Infections?

1. Development of Resistance After an Infection

Below, development of resistance against measles is described.

When a person is exposed to measles viruses for the first time, his immune system needs some time to react against them; meanwhile, viruses may multiply and cause a disease – measles.

During the first-time infection, some white blood cells (lymphocytes) that have came into contact with measles virus develop into memory cells, which remember this exact type of the virus. The next time measles viruses invade the body, memory cells recognize them quickly and trigger immune response in so short time that viruses are killed before they can cause a disease; this means a person has developed an immunity (became resistant) against measles. The same mechanism protects us against many other (but not all) infections.

2. Development of Resistance After Vaccination (Immunization)

a) Active vaccination (immunization) means injecting a vaccine containing weakened or dead microbes (for example chickenpox viruses)  into the body. Once in the body, viruses from the vaccine trigger development of memory cells (just like in a real infection, see above), which are capable of triggering antibodies against real chickenpox viruses thus protecting vaccinated person against chickenpox. Vaccination with modified microbes is called active, since it triggers an active production of immune cells and antibodies in the body. Protection against infection after an active vaccine may last from about a year (like after a vaccine against flu) to several years, or can be lifelong (like after a vaccine against chickenpox or measles).

People with weak immune system (infants, some old people, patients without spleen or with chronic or immune diseases and those receiving chemotherapy or steroids) may suffer from frequent infections.

How to Boost Your Immunity?

Apart from infections and vaccinations, there are not many other factors that can boost your immunity. But you can maintain optimal immunity by regular diet, physical and psychical activity, dealing with due stress and avoiding any extremes you can not cope with.

Unfortunately, immune system fights against organs or bone marrow transplanted from one person to another. This can be sometimes solved by using drugs that suppress immune response. Immune system also fights against red blood cells from a donor with a non-matching blood group.