The pancreas is an important gland located in the upper abdomen. It is a large gland that has multiple functions. Firstly, the pancreas secretes hormones into the bloodstream. This is known as the endocrine functions of the pancreas. Hormones like insulin and glucagon are produced and secreted by the pancreas.

Digestive enzymes are also produced and secreted by the pancreas.  This is known as the exocrine functions of the pancreas. These enzymes are stored in the inactive form and activated only when needed. It is secreted into the duodenum of the small intestine where it assists with the digestion of food.

The pancreas is surrounded by he liver, gallbladder, stomach and duodenum. Conditions affecting these organs may involve the pancreas and similarly conditions of the pancreas can sometimes affect these other organs.

Difference between Pancreatitis and Pancreatic Cancer

Which pancreas condition is more serious?

Pancreatitis, both acute and chronic, are serious conditions and can even lead to death if not properly treated and managed. However, panceatic cancer is often considered to be more serious. It is an aggressive form and one of the five leading causes of cancer deaths. It is rarely detected in the early stages which is one of the reasons for the poor prognosis. Pancreatic cancer is responsible for approximately 7% of all cancer deaths.

Chronic pancreatitis is one of the major risk factors for developing pancreatic cancer. Even if it does not lead to pancreatic cancer, it nevertheless affects normal pancreatic functioning which can lead to serious and even deadly complications. Therefore pancreatitis, whether acute or chronic, should also be viewed as a serious condition and appropriately treated or managed.

Symptoms and Signs of ACUTE Pancreatitis

Symptoms of acute pancreatitis include (1):

During physical examination, a doctor may find the following signs of acute pancreatitis:

Diagnosis. Elevated pancreatic enzymes: amylase, lipase and trypsin, together with the history of alcohol abuse or gallstones is usually enough for diagnosis (1). In doubtful cases, a CT (computed tomography) scan may be needed.

Symptoms  and Signs of CHRONIC Pancreatitis

Chronic pain, either constant or recurrent, in the upper abdomen is the main symptom. Other symptoms resemble acute pancreatitis (see above). With time, other symptoms, due to complications, may develop:

Diagnosis is made from the history of repeating acute pancreatitis and chronic alcohol abuse. Pancreatic enzymes tests are not reliable (2).  Stool-fat test may reveal fat malabsorption. X-ray may show calcifications (Picture 1). CT (with contrast) of abdomen may be needed in doubtful cases. 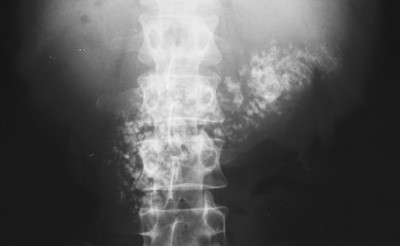 Picture 1. Chronic pancreatitis: calcifications in the pancreas (X-ray of abdomen)

Symptoms of pancreatic cancer often appear only in its advanced stage. Risk factors are genetic predisposition, chronic pancreatitis, smoking, fat-rich diet, and age after 60. Symptoms are not specific and may include:

Pancreatic cyst is an enclosed sac within the pancreas, which sometimes may be cancerous. Another type of similar condition is known as a pancreatic pseudocyst. This type of cyst is a “false” cyst. It can develop as a result of severe pancreatitis. A pancreatic cyst often presents with no signs and symptoms but it may sometimes cause:

Pancreatic cysts are often found during ultrasound, CT or MRI investigations performed because of other abdominal problems. A needle aspiration of the fluid from the pancreatic cyst (performed during endoscopic ultrasound) may reveal if a cyst is cancerous or not (4).