How do you know when you are not getting enough sleep? It is not always as obvious as you may think. People with sleep-related problems who are experiencing significantly reduced sleeping hours are well aware that the sleep is insufficient. TBut for many people who do not suffer with an obvious sleep disorder the question about sufficient sleep time can be perplexing. It can sometimes be the difference between an adequate 8 hours and an insufficient 5 hours.

The Right Amount Of Time To Sleep

Sleep is part of the daily cycle as per the circadian rhythm and is influenced by a host of factors such as the levels of a hormone known as melatonin. There is no specific amount of sleep that is adequate for every person. Age is one factor that varies the required sleeping time but so are individual differences. Babies may need to sleep in excess of 12 hours a day, children around 10 hours, adults may manage on 6 hours and the elderly may need at least 8 hours of sleep every day. Then there is also the issue of shorter naps throughout the day as babies, young children and the elderly may need in addition to the night’s sleep. Certain diseases may also affect the ability to sleep for long hours.

Determining the right amount of sleep largely depends on a person’s level of functioning during waking hours. For adults it is known that at least 6 hours and not more than 9 hours is sufficient sleeping time in a day. Some people can manage on 5 hours. Other adults may need 10 hours. However, sleeping for less than 6 hours often leads to physical and cognitive impairment to some degree as well as compromising emotional wellbeing.  There are some individuals who have no choice but to sleep less than the required time either because they cannot sleep for any longer or life situations prevent them from doing so. 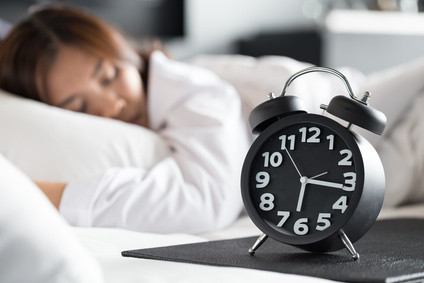 The impact of insufficient sleep is far reaching – it affects a person physically, mentally and even emotionally. The effects are more pronounced as the sleeplessness increases in severity. However, people who are only suffering with a mild sleep disturbance are barely able to discern the symptoms of sleep deprivation. Some of these symptoms are discussed below but there may be other symptoms present. Not feeling refreshed and energetic upon waking is not a reliable symptom. However, unexplained fatigue is probably the most prominent of all the symptoms.

Irritability and mood swings are among the most common symptoms. Memory, concentration span, decision-making and rational thinking among other cognitive abilities are impaired to varying degrees. These mental symptoms often affects the ability to function efficiently in the work situation and can also impact on interpersonal relationships particularly in severe or prolonged sleep disturbances.

All senses may be affected but most people may note the visual symptoms. It includes sensitivity to light, blurring of the vision when trying to quickly focus on different objects at varying distance, glare and halos. There are typically other eye symptoms as well such as dark bags and puffiness under the eyes as well as bloodshot eyes.

Physical dexterity is also affected with insufficient sleep and it is often noticeable. Muscle weakness, poor coordination, tremors and slower reflexes are some of the symptoms that may arise. However, with minor sleep disturbances these symptoms are not always obvious particularly to people who are not dependent on physical dexterity in the course of the day.

Alterations in appetite typically includes a reduction in the desire to eat. Some people may crave sugar and other high glycemic index (GI) carbohydrates as a way of getting an energy boost to counteract the fatigue to some extent. Furthermore many people may also find a desire for caffeinated beverages for its stimulant effect.

Blood pressure and blood glucose levels may be affected but not to a large degree in minor sleep disturbances. In fact it may not even be detectable, if present at all. There may be a moderate rise in blood pressure as a result of peripheral vasoconstriction associated with lack of sleep. The body’s response to insulin may be altered which can cause an increase in blood glucose levels but this is most notable in diabetics.

Difficulty sleeping for a full night may be seen as symptom in many physical and mental health conditions such as sleep apnea, hyperthyroidism, Parkinson’s disease and so on. It is also common when other symptoms like pain or itchy skin are present which affect normal sleep patterns. Sleep disturbances can also occur when using certain pharmaceutical drugs.

However, the more common causes are psychological stress, dietary and lifestyle factors. This is particularly the case in people who do not usually suffer with sleep-related disorders and who only sustain a slight disturbance in the sleep. Sometimes the disturbance can occur for no clearly identifiable reason.Here are some of the reasons for not insufficient sleep.

Prescription medication is not usually necessary for minor sleep disturbances where a person is getting one or two hours less sleep than they need for optimal functioning. In fact medication should be avoided as far as possible because it can adversely affect the circadian rhythm. Rather the sleep cycle should be altered with conservative measures like lifestyle changes.

Sleep hygiene is an important and effective pre-sleep ritual that can aid with falling asleep. However, for many people suffering with insufficient sleep the problem is staying asleep rather than falling asleep. Sometimes this may not be a physiological or psychological problem but rather the environment is inappropriate.

The following sleeping tips can be helpful: