There are two main types of contractions that occur in the small intestine as well as other parts of the gastrointestinal tract. These movements are known as mixing contractions and propulsive contractions. While these contractions are categorized separately, both perform similar functions. Mixing movements mainly churns food but also propels it. Propulsive movements primarily push food towards the anus but also spreads it out for allowing the digestive enzymes to mix with it.

This is also known as segmentation contractions. It is triggered by the stretching of the intestinal wall as chyme (partially digested food mixed with digestive enzymes) enters small intestine. While mixing contractions also propels food through the small intestine, its main function is to churn the chyme with intestinal enzymes and mechanically break down some particles.

These contractions are concentric meaning that they run around the intestine as illustrated in the diagram below. These spaced segments relax and constrict a number of times thereby “chopping” the chyme and mixing it back and forth with enzymes, mucus, water and ions in the intestine. These contractions occur about 10 to 12 times per minute in the duodenum (first part) and jejunum (mid) of the small intestine and diminish to about 8 or 9 contractions per minute in the terminal ileum (end portion). 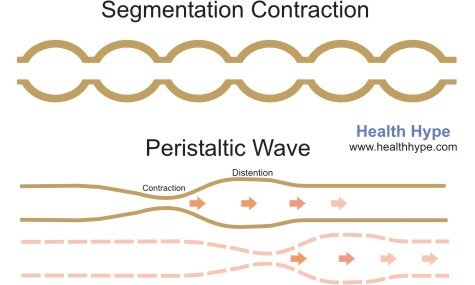 Peristaltic waves propel chyme through the gut. In the intestine a concentric contraction like those described above occurs proximal to the chyme while the distal part relaxes and distends. The contraction begins to run down the intestine causing progressive relaxation and distention, known as the peristaltic reflex. These waves essentially push the chyme downwards from the duodenum to the ileum. In addition, it plays a role in mixing by spreading out the chyme thereby allowing the enzymes to act on it.

Peristaltic waves in the small intestine push chyme at an average speed of 1 centimeter per second. These movements are not continuous. It pushes the food for about 3 to 5 centimeters and then ends. A new peristaltic wave then begins about 2 to 3 cm proximal to the distended portion containing the chyme. Therefore it takes chyme about 3 to 5 hours to reach the ileocecal valve once it leaves the stomach.

Peristaltic waves in the small intestine are not entirely different from mixing contractions. Both these type of contractions occur almost simultaneously to ensure the churning and movement of food at the same time.

Control of Movement through the Small Intestine

A number of hormonal and nervous factors initiate and maintain peristalsis and mixing. Nerve impulses which travel throughout the small intestine are triggered by the gastroenteric reflex (refer to Defecation Reflex) and localized distention of the duodenum. These impulses are propagated via the enteric nervous system, mainly the myenteric plexus, which is the gut’s own internal network of nerves. It is further regulated by impulses from the central nervous system via the vagus nerve and sympathetic trunk. These nerves are discussed further under Stomach Nerves.

The ileocecal valve controls the entry of chyme into the colon and prevents backflow of fecal matter into the ileum of the small intestine. It has valve lips that closes when the pressure in the cecum builds up. In addition, the end portion of the ileum, just proximal to the ileocecal valve, has a muscular sphincter. This is constantly constricted and restricts the flow of chyme from ileum into the cecum unless appropriately stimulated to relax and thereby open. The ileocecal sphincter ensures that intestinal contents stay within the small intestine long enough for sufficient absorption of nutrients.