Certain types of rashes tend to appear around the knees and elbows:

Atopic dermatitis or eczema is an itchy, red, scaling oozing or crusting rash appearing in persons prone to asthma and hay fever. It runs in families. In infants, it usually affects the outer sides, and in older children and adults the inner sides of both knees, elbows and often other parts of the skin. Flare-ups that come and go are characteristic for an acute eczema, and pigmented plaques (slightly raised flat rash) for a chronic eczema. Treatment is with moisturizing creams, steroids and other medications (1). 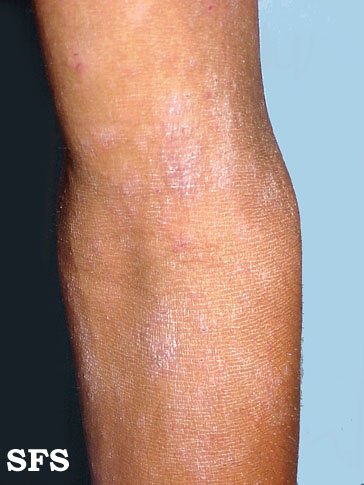 In dermatitis herpetiformis, itchy, herpes-like blisters appear around the knees, elbows, neck or other parts of the skin. A disorder appears alone or together with celiac disease in people sensitive to gluten. Prevention is by gluten-free diet. Dapson is an effective treatment for a rash (3).

Discoid eczema usually appears as a disc-like plaque on the back side of one leg and can later appear on the other leg, arms and trunk. The cause is not known, but it can be triggered by an insect bite, cut, surgical wound or skin burn. Dry and wet form exist. It is more common in the winter, and it may come and go without apparent reason. It can be treated with moisturizing creams, steroids and other drugs (4).

Other Rashes Around the Knees and Elbows

Other causes of rash, appearing around the knees or elbows or elsewhere on the skin: