There are numerous divisions from the main arteries and its branches. These sub-branches form perforating and communicating arteries along its course to ensure a constant supply of oxygenated blood to all parts of the thigh, lower leg and foot. For the purpose of this article, only the main arteries and its primary branches are listed. These arteries are the most significant in circulation problems in the leg as an occlusion in one of these arteries can severely compromise blood supply to the relevant part of the leg. With an occlusion in the smaller branches, collateral flow can be established through other branches, perforating and communicating arteries. 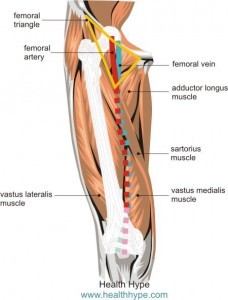 The obturator artery originates from the internal iliac artery and enters the medial compartment of the thigh after passing though the obturator foramen.

The anterior tibial artery continues towards the foot to become the dorsalis pedis artery of the foot. This artery along with its branches supply the dorsal aspect of the foot.