Jaw pain is not uncommon and we all experience it a few times in life. In most instances it is related to dental problems like tooth decay or a broken tooth, and every now and then it may occur with a blow to the face. However, sometimes the problem can be much more serious like with jaw pain that occurs in heart attacks. It is important not to ignore joint pain especially where it is persisting or worsening and accompanied by other signs like chest pain, dizziness, facial swelling or difficulty in opening the mouth.

The lower jaw is known as the mandible while the upper jaw is the maxilla. The mandible articulates with the skull at the temporomandibular joint (TMJ). The jaw and overlying tissue hold the teeth in place and allow for movement to allow for chewing, talking and breathing. Apart from the tongue and cheeks that lie on either side, there is also the parotid and submandibular gland that lies in close proximity. These structures are relevant because a problem here may sometimes give rise to lower jaw (mandible) pain. 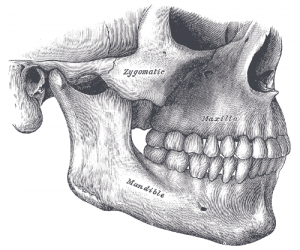 Pain in the lower jaw (mandible) may not always mean that the problem lies in the bone itself. It can emanate from the gum and teeth, from the temporomandibular joint (TMJ), the jaw muscles, salivary glands and even from the heart.

A broken jaw is probably one of the most severe causes of jaw pain. It occurs during motor vehicle accidents, assaults, sporting injuries, falls and with other injuries to the face. Considering the causes, it is not surprising to find that men are three times more likely to sustain a fracture of the lower jaw compared to women. The nature of the fracture may vary as with other bones in the body. The bone may break but not fragment or penetrate the skin (simple fracture), fragment (comminuted) or pierces through the skin or inner tissue of the mouth (compound).

A dislocation of the lower jaw is where the mandible ‘slips’ out of place at the temporomandibular jaw where it articulates with the skull. It may be caused by any significant impact to the face but can also be related to chronic joint problems. Sometimes the jaw may ‘slip’ back into the normal position and there is only a risk of another dislocation when opening the mouth very wide. At other times the dislocation has to be treated medically to restore the joint in its normal position. The symptoms may sometimes be similar to a fracture jaw in that there is a deformity, pain, tenderness and so on but bleeding does not occur with a dislocation. A popping or clicking sound in the jaw may be heard with movement.

Tooth decay (dental caries) is one of the more common causes of jaw pain. It arises from the wearing down of the hard outer enamel layer of the tooth. Eventually a cavity can form where food and bacteria may become trapped. This progresses to an infection which is usually very painful. It usually arises gradually although the pain can become intense overnight. Sometimes a tooth can break when excessive mechanical strain is placed on it and this can also cause pain even without any decay. A broken tooth often causes pain almost immediately depending on the extent of the break. 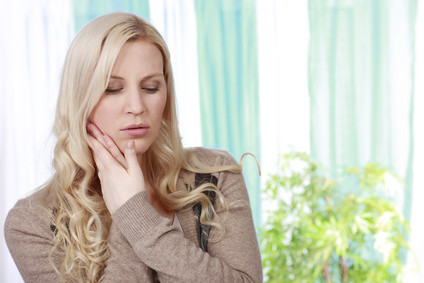 An impacted wisdom tooth is another tooth-related cause of lower jaw pain, more towards the back  and closer to the ear. It occurs when the third molars, which usually erupt much later than the other permanent teeth, does not have enough space to emerge properly. There are two wisdoms on the upper and lower jaw and an impact wisdom tooth can also cause upper jaw pain. If it is partially impacted then only a portion of the tooth (crown) shows through. When it is fully impacted none of the tooth is visible as it does not break through the gums. It is more likely to cause symptoms when it becomes infected or damages neighboring teeth.

A dental abscess, also referred to as a dentoalveolar abscess, is where pus collects in or around a tooth. The more common types are a periapical abscess or periodontal abscess, where it may occur at the base of the tooth or in the surrounding tissue that holds the tooth in place. These abscesses are usually a complication of other tooth-related problems like tooth decay or a broken tooth. The abscess is not always visible to the naked eye and can even be relatively painless despite the presence of other symptoms like facial swelling. Symptoms are largely the same as for other tooth problems discussed above.

Angina pectoris or a myocardial infarction (heart attack) are the more serious causes of jaw pain. A heart attack can even be fatal within minutes. The problem in both these conditions is that the blood supply to the heart wall is affected usually due to a narrowing and blockage of the coronary arteries. Eventually the heart tissue becomes injured (ischemia) or even dies (infarction). Jaw pain is a relatively common symptom although most people only focus on chest and left arm pain.