Although the blood vessels, specifically the veins, carry away most of the fluid in the interstitial spaces, about 10% is transported via the lymphatic system. This equates to some 2 to 3 liters (65 to 100 fluid ounces) of lymphatic fluid draining into the venous circulation.

When the lymphatic system fails to function in an efficient manner, the excess fluid accumulates in the tissue spaces and causes swelling. Eventually it impairs the circulation in the area and compresses neighboring structures and organs causing a host of conditions. In addition, the proteins returned back into the circulation by the lymphatic system is crucial for sustaining life, and if this is impaired death may ensue, sometimes as soon as 24 hours. 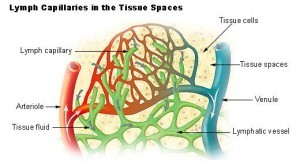 The lymph nodes also ensure that large populations of these pathogens do not return to the blood stream along with the lymphatic fluid thereby preventing the infection from spreading. Any pathogens that do enter the blood stream are later filtered partly by the liver but primarily by the spleen, which is seen as the largest lymph node in the human body. 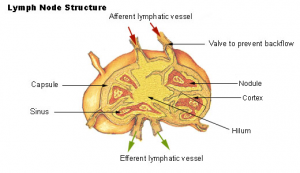 All lymphatic vessels empty its contents (lymph) into the blood stream, specifically the venous circulation. It does this primarily by emptying into two major conduits which drain into the veins – thoracic duct and right lymph duct.

Lymph from the upper body enter the venous circulation through two routes :

Lymph from the lower part of the body travel via various lymphatic vessels to empty into the thoracic duct.

Functions of the Lymphatic System