Malaria at one time was the cause of as many as 3 million deaths across the globe. Although global efforts have significantly lowered the loss of lives from malaria, it continues to be a dangerous infectious diseases that kills hundreds of thousands of people annually. Malaria is still a major health risk in parts of Africa especially, where a child dies every minute due to the infection. At one time it was endemic in the southern US states but was subsequently eradicated. Nevertheless, Americans are still at risk when traveling to endemic areas.

Malaria is an infectious disease caused by parasites that are spread through mosquito bites. It can be life threatening. Although it can affect any person, not every person who is infected with the malaria parasite will die. Certain drugs can be used to prevent the infection and mosquito control is another effective way of eradicating the parasite from the environment. However, both measures are not infallible and malaria often remains a risk in an endemic area for a long period of time.

The malaria parasite multiplies rapidly in the body. It matures in red blood cells and ultimately destroys these cells. Some species of malaria can quickly cause anemia due to this rapid destruction of red blood cells and along with other disturbances, it can lead to death over a very short period of time. Other species can cause a more long-lasting infection with only mild to moderate symptoms. 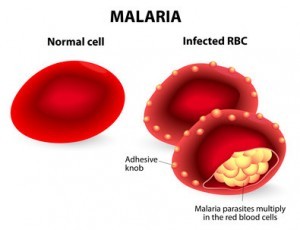 As an infectious disease, malaria is caused by a pathogen that enters the body. The pathogen in this case is a parasite of the Plasmodium species. It is not a virus or bacteria but a protozoan (plural ~ protozoa), which are also single-celled organisms like bacteria. There are over 100 Plasmodium species that can cause infections in mammals and reptiles. Only four of these species cause disease in humans.

Another type of Plasmodium parasite, P. knowlesi, infects macaques but the infection can then be transmitted to humans. 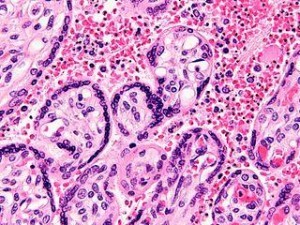 Malaria is spread mainly by mosquito bites, and specifically by the bite of the Anopheles mosquito that has the parasite in its saliva. The mosquito acquires this parasite when it feeds on a person infected with malaria. Any person who is bitten next by the mosquito is then at risk of acquiring malaria. The parasite travels to the liver cells where it may lie dormant and mature. Upon leaving the liver cells it infects and destroys red blood cells.

In the bloodstream it can be easily spread to another person by either a mosquito (most common mode of transmission), through a blood transfusion, by sharing needles as is a common practice among IV drug users or even from a mother to her unborn child. Zoonotic malaria is where the parasite is spread to humans from an animal. It is only known to occur thus far with macaques infected with Plasmodium knowlesi parasites. 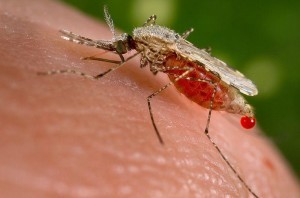 Firstly, it is important to understand that not all types of the malaria parasite will cause a severe infection and lead to intense signs and symptoms. Secondly, the immune defenses of a person also determines the severity of the disease. Once infected a person will not show immediate signs or symptoms. It can take a few days or weeks for symptoms to appear as the parasite replicates, spreads and destroys cells within the body.

This period between infection and the onset of symptoms is known as the incubation period. It can vary from one person to another and also depends on the Plasmodium species responsible for the infection. P.falciparum typically has an incubation of within one month but not sooner than 7 days after infection. There are rare instances where it can be as long as one year. Both P.vivax and P.ovale have an incubation period ranging from weeks to months.

These signs and symptoms include:

Malaria attacks are a collection of symptoms that arise for a period of time and then eases, only to recur again in a few days time. These symptoms may be intense and last for 6 to 10 hours at a time. These attacks may occur every second day in an infection caused by P. falciparum, P. vivax and P. ovale, and every third day with P. malariae. Although these attacks are considered to be classical for malaria, it is not frequently observed.

Apart from supportive measures, malaria must be treated with antimalarial drugs. There are many different drugs to treat malaria. The choice of drug depends on several factors, like the age of the patient, type of malaria parasite and severity of symptoms. Some malaria parasites cannot be eradicated with certain malarial drugs. Furthermore drug resistance is becoming a problem in many endemic areas.

The more common drugs used for treating malaria are chloroquine, quinine sulfate, hydroxychloroquine, mefloquine and a combination of atovaquone and proguanil. Some of these drugs can be taken orally while others have to be administered intravenously. Although certain drugs for malaria treatment may also be used to prevent infection (prophylaxis), the treatment of malaria should not be attempted by using the preventative drugs and without the supervision of a medical doctor.

Malaria can be prevented but there is foolproof measure to avoid being infected altogether. Preventative measures can drastically reduce the chance of being infected or at least reduce the severity of the disease if infected. These measures involve: