Mastoiditis is the inflammation of the bony protrusion of the skull just behind the ear canal. The mastoid process is a part of the temporal bone and has hollow air spaces known as the mastoid antrum and mastoid cells. In mastoiditis it is the mucosal membrane lining the mastoid antrum and mastoid cells system that becomes inflamed. Due to its close proximity to the ear, mastoiditis tends to arises as a complication of acute infections of the middle ear (otitis media). It is a potentially life threatening condition should the infection spread to the brain which lies near to the mastoid process.

Mastoiditis occurs from the spread of infective organisms from the middle ear to the air cells in the mastoid process. The infection leads to pus formation within the narrow bony air spaces increasing the pressure in the air cells. The rate of pus production usually exceeds the rate of the pus drainage through the the eustachian tube and perforated eardrum. Swelling of the mucosal lining also hampers proper drainage of pus. 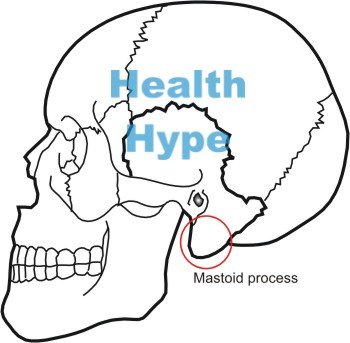 The impaired pus drainage increases the pus accumulation within the air spaces of mastoid antrum which can cause bone resorption and weakening of the bony walls of the mastoid air spaces. Over the course of time all the air spaces fuse to form single and irregular pus filled cavity. This pus may make its way to the subperiosteal space and it may eventually burst open through the skin to form pus discharging fistulous opening.

Since mastoiditis is usually a complication of a middle ear infection (otitis media), the causes are largely the same. Bacteria are the main pathogens that cause an infection but in some rare cases fungi may be involved. The following bacteria are more common :

Mastoiditis is usually seen in infants and children who tend to be more prone to middle ear infections. although it can develop at any age. Other important risk factors include :

The patients usually present with :

Some patients can also have pain in the ear and loss of hearing on the affected side. The other non-specific features accompanying mastoiditis can include fever, headache, irritability, loss of appetite and generalized weakness.

The diagnosis is generally made on the basis of the medical history, the symptoms, the physical examination findings and the radiological findings.

The laboratory investigations can reveal rise in neutrophil count and ESR (erythrocyte sedimentation rate). X-ray of the mastoid area reveals cloudiness in the mastoid area due to the collection of pus and associated mucosal oedema. CT scan and MRI are better investigations compared to the X-ray in diagnosing mastoiditis. Pus then may be sent for culture and sensitivity to determine the proper antibiotic which can be used for the treatment.

Antibiotic therapy is the most important part of the conservative management of mastoiditis. Ideally  patients should be started with an  antibiotic based on culture and sensitivity report. However, any of the broad spectrum antibioticsc can be commenced until the culture and sensitivity report is available. The conservative management is often difficult in mastoiditis as drugs may not penetrate deep into the mastoid bone.

The antibiotic course often requires longer use beyond the regular duration of therapy. The common antibiotics used are ceftriaxone, amoxicillin with clavulanic acid, sparfloxacin, gatifloxacin, ofloxacin or linezolid. Anaerobic infections are treated with metronidazole. Ceftriaxone administered intravenously for 7 to 10 days is often the treatment of choice in acute mastoiditis. The initial intravenous therapy may be later switched to oral antibiotic therapy.

Analgesic anti-inflammatory drugs are generally given along with the antibiotic therapy to reduce the inflammation and relieve the pain. It will also help in reducing the temperature in those having the fever.