There ear is divided into three parts – the outer, middle and inner ear. The first two parts are mainly responsible for hearing while the inner ear is responsible for both hearing and balance. Conditions affecting the inner ear will therefore lead to symptoms such as hearing loss, tinnitus and lead to balance and movement-related symptoms like vertigo. Meniere’s disease is one such condition.

What is Meniere’s disease?

Meniere’s disease is a condition where there is increased pressure within the inner ear. Since the inner ear is responsible for both the sense of hearing and for balance, Meniere’s disease will often affect these functions. Therefore symptoms such as hearing loss, tinnitus (ringing in the ears) and dizziness are often present in Meniere’s disease. It may be of varying intensity and fluctuate during the course of the disease.

Overall Meniere’s disease is not very common but is not a rare condition either. It is known to affect about 1 in 100 people but the prevalence could be much higher as the condition may be under reported. Although Meniere’s disease has been reported in children as young as 4 years, it is most likely to occur in the 40 to 60 year age group. It tends to be more common among females.

The cause of Meniere’s disease is not exactly known. In fact the medical term for Meniere’s disease is idiopathic endolymphatic hydrops, and the term idiopathic means of unknown cause. To some extent the exact mechanism is also not clearly understood but the condition appears to be due to increased fluid pressure within the structure of the inner ears.

The labyrinth is a hollow cavity within the ear which is filled with fluid. It has different parts, one of which is the cochlea and the other being the vestibule. The cochlea is the hearing apparatus while the vestibule is reponsible for balance. There are two types of fluid within the labyrinth – endolymph and perilymph – which are separate by a membrane. 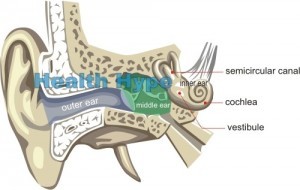 In Meniere’s disease, it appears that there is an increase of endolymph which raises the pressure within the labyrinth of the inner ear. It is unclear as to whether this increase of fluid is the cause of the disease or occurs as a result of the disease. In fact, there are patients who have increased fluid pressure within the inner ear but do not experience any of the symptoms that are characteristic of Meniere’s disease.

The increased fluid pressure appears to cause disturbances within the organs of hearing and balance. Although the exact reason for this increase in fluid is unclear in Meniere’s disease, it can be occur with infections, allergies and trauma. Blocked drainage of fluid, immune disturbances, genetic factors, head injury and migraines may also play a role in a rise in fluid pressure within the ear but this may not always lead to Meniere’s disease.

The symptoms of Meniere’s disease are usually episodic. These episodes come and go with symptom-free gaps that may last for months or even years. The three main symptoms of Meniere’s disease are vertigo, hearing loss and tinnitus. Other symptoms like a feeling of fullness in the ear may also be present. The auditory symptoms are usually one-sided but can sometimes affect both sides (bilateral).

Vertigo is a sensation of moving despite being stationary. Most people describe it as a spinning sensation. With Meniere’s disease, vertigo can come and go suddenly. It may last anywhere from a few minutes to several hours. These episodes of vertigo must last for at least 20 minutes for a diagnosis to be made. It may be accompanied by nausea and vomiting.

The hearing loss in Meniere’s disease may vary in intensity and duration. It is sensorineural hearing loss and usually only affects one ear. However, it can occur in both ears. The hearing loss is not always obvious. Often it is only the ability to hear lower frequencies that are normally audible to humans which is lost. In the long term there tends to be some degree of permanent hearing loss.

Tinnitus is the perception of sound despite an external source. It is often described as a ringing sensation but may also be a swooshing, roaring, whistling or buzzing sound in the ears. This abnormality usually correlates with the hearing loss and can be continuous or intermittent.

Although there is no cure for Meniere’s disease, treatment can help control the symptoms. Some drugs may also reduce the frequency of Meniere’s disease attacks. In severe cases that do not respond to medication and other non-invasive techniques, surgery may be considered.

Other therapies focus on helping a person suffering with Meniere’s disease to cope with the symptoms of the disease. This may include: