A meningioma is an abnormal growth (tumor) that arises from the protective lining around the brain and spinal cord, the meninges. These tumors can be benign (non-cancerous) or malignant (cancerous) with some being atypical where it is neither cancerous nor non-cancerous. The vast majority of meningiomas are benign. A meningioma means that the tumor arises from the cells that make up the meninges. It is possible for some cancers to spread to the meninges (metastasis) and result in a tumor at the site but this is not a meningioma. Although most meningiomas are benign, it still causes significant complications as it compresses the nerve tissue in the brain or spinal cord.

Meningiomas are one of the most common types of tumors that occur within the cranium of the skull (intracranial mass). However, it is not a common tumor overall. Only about 2 out of 100,000 people are diagnosed with symptomatic meningiomas every year. However, it appears that meningiomas are much more common but remain undiagnosed in the majority of cases. Women are at a greater risk than men of developing meningiomas and the risk increases with advancing age.

The brain and spinal cord tissue are very delicate and are protected within the bony cavities of the skull (cranium) and vertebral column (spinal canal) respectively. The meninges serve as a cushion protecting the nerve tissue of the brain and spinal cord. It also provides some of the blood flow to these areas. There are three layers : 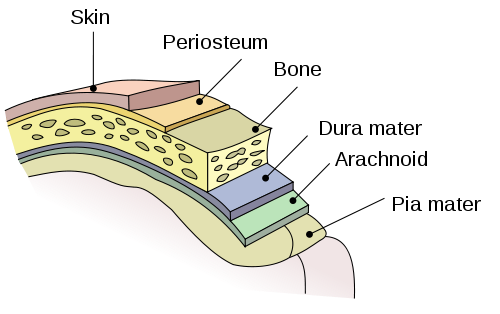 Meningiomas arise from the certain cells comprising the arachnoid mater and more specifically the arachnoidal cap cells. Normally cells that make up a tissue grow in a set pattern. This ensures a uniform arrangement of cells side by side. Each cell type has the same shape and size and specific functions. When the cell is “old” or damaged, it undergoes programmed cell death known as apoptosis. Depending on the location, a new cell replaces the lost cell. This process is carefully coordinated.

With a tumor, the cells tend to grow excessively. In benign tumors the cells are usually somewhat normal but just in larger than normal numbers resulting in a mass. With malignancies, the cells are structurally abnormal and invades the surrounding healthy tissue. The cancerous cells can break off and travel through the bloodstream and lymphatic system to other parts of the body. The exact reasons why these abnormalities of growth arises is not clearly understood. It is believed to be due to some damage to the cell’s genetic material that leads to uncontrolled growth.

Meningiomas can be classified into different types based on its location. Most occur on the surface of the bran but some can arise in the ventricles of the brain or even extend into the skull.

The symptoms of a meningioma is largely dependent on the location. However, the symptoms can at times be vague and confusing at the outset. These neurological symptoms may not be typical or specific for a meningioma and other more likely causes first needs to be excluded. A meningioma should be diagnosed after investigations reveal the presence of a mass. The symptoms alone are not a reliable indicator.

It is important to note that not all of these symptoms may be present or exist at the same time.

The exact cause of most tumors are not known. It is a result of abnormal patterns of growth which is most likely due to defects in the genetic material. The exact type of genetic defect or mutation has not been conclusively identified in meningiomas. Despite the lack of definitive evidence that clearly isolates possible causes, it has been suggested that meningiomas may be associated with :

Excessive use of cellular phones has also been implicated as a possible cause but the evidence to conclusively link it to a meningioma is lacking.

A meningioma cannot be conclusively diagnosed by the symptoms alone. The definitive investigations for diagnosing a meningioma are imaging studies. This allows for the actual tumor to be visualized. The two main diagnostic investigations include :

A plain head x-ray may also indicate a meningioma in some cases but it should be followed up with a CT scan or MRI. Endovascular angiography is another useful diagnostic investigation that is usually conducted prior to surgery. It allows the surgeon to investigate the blood supply to the tumor and plan the removal of the tumor. Histological studies are usually conducted on the resected tumor.

A meningioma needs to be surgically removed. Medication may help to limit complications or possibly decrease the chance of recurrence. However, surgery is the only option that can be considered curative in some cases. A meningioma is not always treated immediately. Small tumors that are not malignant and are not causing any symptoms may be monitored for a period of time (wait-and-watch approach). In these cases, surgery is only initiated once the tumor begins to grow rapidly or symptoms become evident.

Surgical resection involves removing the tumor and replacing the dura mater with a suitable substitute in a procedure known as duraplasty. The tumor is removed entirely but this is not always possible if the mass sits close to sensitive structures that are at risk of being damaged. Where possible, some healthy tissue around the tumor is also removed particularly in the case of cancers where the local spread may not be clearly identifiable at the outset.

Chemotherapy for malignant meningiomas do not have a very promising success rate. It is reserved for cases where surgery and radiation therapy have not been sufficient to completely eradicate the cancerous growth.