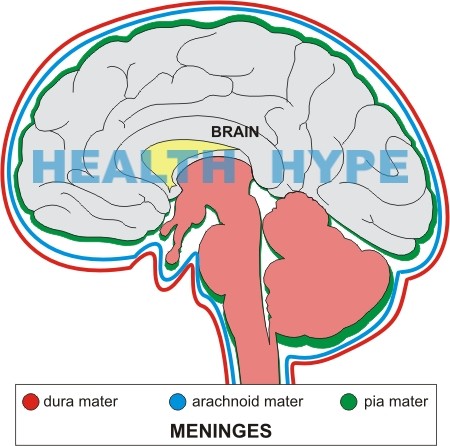 The meninges are membranes that cover and protect the brain and spinal cord. There are 3 layers known as the dura mater, arachnoid mater and pia mater.

All the 3 layers are composed of fibrous tissue and a sheet of flat cells which seem to be impermeable to fluid. The arachnoid and pia mater are together known as the leptomeninges.

Meningitis is the inflammation of the meninges, the protective membranes covering the brain and spinal cord. It is most commonly caused by bacterial, viral, fungal, or other infections but  may also be caused by certain drugs, head or spinal injury, or meningeal infiltration by cancer cells. Meningitis or inflammation of the dura mater is known as pachymeningitis, while that of the arachnoid or pia mater is known as leptomeningitis.

Meningitis is most common in newborns, infants, older children and young adults. Older adults especially at risk are those with a  compromised immune system as in those suffering from AIDS or cancer. Symptoms in children may vary from those in adults and absence of specific symptoms in infants often makes diagnosis difficult. Newborns and infants are more often at risk of a severe infection.

Of the different infectious causes, bacterial meningitis is the most severe and extremely contagious. It can rapidly become life-threatening if not treated promptly with appropriate antibiotics. Long-term complications may include permanent neurological deficits such as mental retardation, hearing loss, and cranial nerve palsies. Fortunately, the incidence of meningitis has decreased significantly as a result of immunization programs.

Viral infection is the most common cause of meningitis. Viral meningitis is usually less severe and self-limiting, requiring no specific treatment. The outlook is good, and there are usually no long-term or serious side effects. Viral meningitis occurs mainly in children and young adults.

Meningeal irritation may occur in bacterial, viral, and fungal infections, as also in other non-infectious conditions, leading to signs of meningism. The blood-brain barrier normally keeps infection at bay by disallowing harmful organisms such as bacteria and virus from reaching the brain and the meninges via the blood stream. However, in certain circumstances the blood-brain barrier may be compromised and organisms invade the cerebrospinal fluid (CSF) that surrounds the brain and spinal cord. The body’s immune system tries to combat this infection by congregation of more white blood cells (WBC) in that area. This causes inflammation of the meninges with resultant edema or swelling of the brain tissue, which may hamper blood flow to vital areas in the brain. Pus formation within the meninges may result in adhesions. These may obstruct the free-flow of CSF and lead to hydrocephalus or may cause damage to the cranial nerves at the base of the brain. There is likely to be a rise in CSF pressure.

Causes and Risk Factors of Meningitis

Meningitis is more likely to cause meningitis in immunosuppressed individuals, diabetics, alcoholics, pregnant women, and in newborns. The causative organisms may be contracted through several possible routes including :

Risk factors may include :

Hemophilus and meningococcal type C infections have decreased in the community due to vaccination against these organisms.

These organisms are often multidrug-resistant.

Signs and Symptoms in Adults

The onset is usually rapid, developing over a few hours or within a day or two.

Signs and Symptoms in Children

The characteristic symptoms of headache and neck stiffness may not be present in newborns and infants. Absence of typical signs and symptoms often makes diagnosis difficult. Sometimes the only signs may be unusual crying, poor feeding, or vomiting, especially with a tense fontanelle (soft area on the baby’s head). Vomiting due to gastrointestinal causes is likely to cause sunken fontanelle.

Viral meningitis is usually self-limiting and does not need any specific treatment. In bacterial meningitis, the choice of antibiotic depends on the infecting organism.

Taking into account factors such as the patient’s age, whether the disease is community or hospital acquired, a known local outbreak of the disease, history of head injury, or if the patient is immuno-compromised, antibiotics may be started empirically against the organism most likely to be involved till test results and antibiotic sensitivity reports are available.

LP, blood culture, and blood glucose are essential for accurate diagnosis but antibiotic treatment should not be delayed if there is suspicion of meningitis but the tests cannot be done immediately. Benzylpenicillin given by intravenous (IV) or intramuscular (IM) injection as soon as possible, sometimes even without waiting for test results, may save a life. Alternatively, ceftriaxone or cefotaxime may be given

General measures may include :

Since meningococcal infection is highly contagious, family members and other close contacts of patients, especially children, should take prophylactic measures for prevention of disease. Rifampicin is usually given for 2 days, adults taking 600 mg twice a day. The dose for children under 1 year is 5 mg/kg 12-hourly, and those over 12 months 10 mg/kg 12-hourly. A single dose of ciprofloxacin 500 mg may be given to adults. The most effective way of preventing meningococcal infection is through vaccination. Vaccines for prevention of disease caused by meningococci Groups A and C are available, but not for Group B.

Vaccination is recommended against some forms of bacterial meningitis, such as :

This vaccine is also recommended for immunocompromized individuals such as those with AIDS, sickle cell disease, those undergoing treatment for cancer, and those who have had a splenectomy (spleen removal).

People at higher risk who should have meningococcal vaccination are :