What is Milroy Disease?

Milroy disease is a condition where there is a problem with lymph drainage and subsequent swelling of the soft tissues (lymphedema) present from birth (congenital). It is a genetic disorder where a mutated gene is inherited from at least one parent but there are instances where there is no known cause of the condition. Milroy disease is incurable but there are various conservative measures that need to be carried out throughout life to reduce the extent of the swelling and prevent complications.

How common is Milroy diease?

Milroy disease is rare and the exact incidence of the condition is unknown. It can affect both genders although majority of the cases occurs in females. There are various other causes of lymphedema but most occur secondary to some other condition. Primary lymphedema, which is solely due to problems originating in the lymphatics, can be divided into three groups :

Why does Milroy disease occur?

The veins in the body carry away tissue fluid laden with wastes, carbon dioxide, proteins and other substances not utilized by the cells. This fluid is processed by the liver, metabolized accordingly and wastes are  excreted through the kidneys. However, not all the unwanted tissue fluid can be carried away by the veins. Similarly certain substances like large proteins and microbes that cannot pass into the vein also stay behind. If it were not for the lymphatic system, this excess tissue and wastes would remain behind in the tissue fluid.

The lymphatic channels are essentially the backup system that “cleans” up what cannot be transported away by the veins. The lymphatic vessels are the long channels that direct the excess tissue fluid now known as lymph. Along its path are filtration units known as lymph nodes. Immune cells that congregate in the lymph nodes remove debris and microbes and is an important part of the immune system. The filtered lymph is then emptied into the venous blood supply. In this way, accumulation of fluid within the tissues and swelling is avoided.

Due to a genetic mutation, the cells that line the lymphatic vessels are abnormal or absent and do not allow for the entry of tissue fluid into the vessels. This means that the excess fluid remains in the tissue spaces around the cells. It leads to swelling known as lymphedema. This is also known as pitting edema because the fluid is spread away from the site when pressure is applied to it.

Over time a type of cell known as fibroblasts are stimulated. These cells are responsible for wound healing and the production of components of connective tissue, like collagen. Eventually the area becomes hardened due to fibrosis and the edema changes over to the non-pitting type. In addition, immune activity at the site is affected thereby predisposing a person to recurrent bacterial infections.

The main symptom is swelling of the lower leg (usually limited below the knee). It affects both legs but the right leg tends to be worse. Infant males may have a swollen scrotum (hydrocele). It is important to note that swelling can occur at any site where the lymphatic vessels are abnormally small or absent. Gravity does play a role in the presentation as the fluid accumulates in the lowest parts of the body, like the legs. The swelling is generally soft and pitting. Certain affected areas may be hard with a “woody” feeling due to fibrosis. The swollen area may be warm to touch.

Cellulitis is common in patients with Milroy disease. The swelling in these cases is worse than just the disease on its own, there is usually redness of the skin, heat and tenderness. An oozing wound may also be present.

Apart from these symptoms, there may also be : 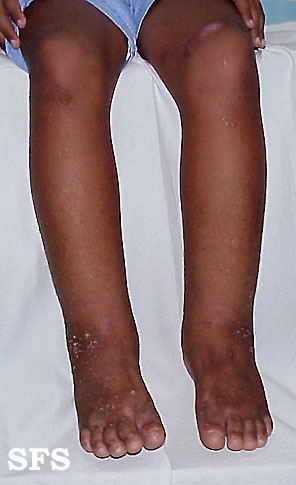 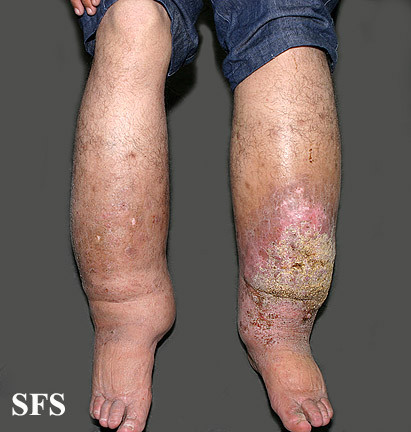 In many cases of Milroy disease, the cause is unknown. In other cases a certain type of genetic defect has been identified. Genes are the blueprint of all living organisms. It provides the details for the formation of every part of the body. In Milroy disease there are mutations in the FLT4 gene which code for protein that influences the development and functioning of the lymphatic cells. This protein that is affected is known as vascular endothelial growth factor receptor 3 (VEGFR-3). Ultimately this means that the lymphatic vessels and nodes are small or absent and therefore not functioning as it should. Lymphatic drainage is ultimately impaired.

Milroy disease is often diagnosed at birth or shortly thereafter. Typically the lower leg is edematous (swollen) and male babies may be born with a swollen scrotum (hydrocele) as well. In order to confirm the diagnosis, various tests need to be done. Genetic testing is not necessary because not every patient with Milroy disease has a mutation in the FLT4 gene and not every person with this genetic mutation has Milroy disease.

Traditional imaging tests are useful for excluding other possible causes of lymphedema but the following investigations are more specific for Milroy disease :

Both these studies may reveal abnormally small or absent lymphatic vessels. An MRI (magnetic resonances imaging) scan may also be useful in identifying  lymphedema.

A punch biopsy is where a sample of tissue is collected to be examined under a microscope. The examination reveals the that lymphatic vessels are absent although in late stages there may be signs of abnormally dilated vessels. Fibrosis is also detected on examination of the biopsy sample.

There is no cure for Milroy disease. Surgery of graft skin with healthy lymphatics has not offered much success. Therefore the condition has to be managed conservatively with various measures to reduce swelling. This can be achieved by :

The exact measures for the management of Milroy disease will be instructed by the supervising physician. A lymph therapist (lymphedema therapist) will work with patients on an ongoing basis to manage the condition.

There is no medication for Milroy disease itself but various drugs may be useful for the complications. Antibiotics are used to treat infections in cellulitis, a common complication in Milroy disease. Sometimes antibiotic injections can be administered monthly to prevent infection in high risk patients. Anticoagulants may also be prescribed on an ongoing basis.