Nocardiosis is an infectious disease caused by the Nocardio group of bacteria that are found in soil. It can also infect animals, especially horses and cows. Human nocardiosis is a rare condition but can be extremely dangerous in a person with a weakened immune system. The infection may be localized to the skin, lungs, or disseminated where it affects any organ in the body and the brain in particular. Nocardiosis can be acute, subacute or chronic. It requires prolonged treatment with antibiotics an is potentially fatal in severe cases. In the United States, Nocardia asteroides are the main species of Nocardia bacteria responsible for human nocardiosis.

How common is nocardiosis?

Nocardiosis is not a common infection in most people with a healthy immune system (immunocompetent). It affects about 0.4 in 100,000 people in the United States with the Center of Disease Control (CDC.gov) estimating that there are about 500 to 1,000 new cases every year. More than half the people infected with Nocardia bacteria are immunocompromised to some extent.

The Nocardia species of bacteria are present throughout the world. It is mainly found in soil and therefore also occurs in decaying organic matter and in water. The bacteria can gain entry through the skin, giving rise to cutaneous (skin) nocardiosis, or through inhalation into the lungs thereby leading to pulmonary (lung) nocardiosis.

From either point of entry, it can spread via the bloodstream to reach any other site in the body. This is known as hematogenous (via the bloodstream) spread and is more likely to occur in pulmonary nocardiosis.The infection leads to the inflammation, the formation of abscesses and cavitation in the tissue it is present. Nodules may develop in the skin which eventually ulcerate. The infection can cause inflammation of the superficial lymphatics as is seen with other causes of cellulitis.

Skin nocardiosis can take many forms. It can infect the skin, involve the tissue underneath the skin as well (subcutaneous tissue) or even spread into the superficial lymphatics at the site. This gives rise to cutaneous, subcutaneous and lymphocutaneous nocardiosis. The infection essentially causes a type of cellulitis with abscess or nodule formation and enlarged lymph nodes. It can also infect the eye if there is direct entry of the bacteria into the eye tissue after injury. Cutaneous nocardiosis tends to be acute in nature but can spread to the joints, thereby causing nocardial arthritis, which can be subacute or even chronic.

Pulmonary nocardiosis, often simply referred to as nocardiosis of the lung, actually involves more than just the lung tissue. The bronchi and pleura may also be involved. The manifestations in the respiratory system may vary from bronchial masses to a lung abscess, pneumonia, empyema (pus around the lung) and pleural effusion (fluid around the lung). In some cases, the abscess may extend through the wall of the chest. Pulmonary nocardiosis may be acute, subacute or chronic. The bacteria can then spread from the lung tissue to the rest of the body – disseminated infection.

Once the infection spread through the bloodstream, it can cause a systemic infection (disseminated form) and reach any organ in the body. It can infect the central nervous system (CNS) and particularly the brain leading to cerebral nocardiosis or CNS nocardiosis. Abscess formation in the CNS tissue is slow and depending on the site of the mass, there may be variations in the symptoms. Death is more likely to occur in CNS nocardiosis. Antibiotic therapy needs to be instituted immediately.

The symptoms of nocardiosis largely depends on the site that is affected. There may be generalized symptoms like a fever, malaise and weight loss which are characteristic of infections. However, these symptoms may be absent in cutaneous (skin) nocardiosis. The symptoms according to each form of nocardiosis are as follows. 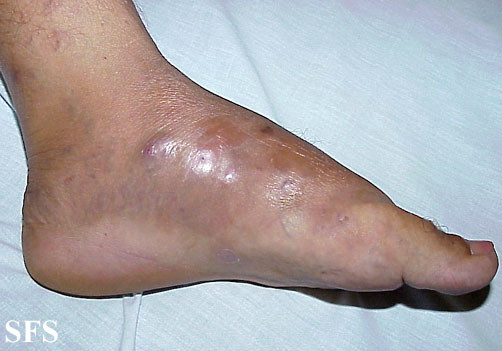 There are some 30 species of Nocardia bacteria that can infect humans. Nocardia infection in humans is mainly due to Nocardia asteroides within the United States. It is mainly seen as an opportunistic infection in people with weakened immune systems (immunocompromised) but can also affect immunocompetent individuals.

The Nocardia bacteria enter the body through inoculation (skin) and inhalation (lungs). It can then spread throughout the body through the bloodstream (hematogenous spread) thereby affecting any other site in the body. The legs and brain are the commonly affected sites in systemic infections. Although rare, Nocardia bacteria could gain entry through a surgical wound after an operation (post-surgical infection).

Although any person can acquire a Nocardia infection, people who are more likely to be infected are those who have some degree of immune dysfunction. Risk factors may therefore include :

The symptoms are largely non-specific for nocardiosis and various other infections are more common, even in immunocomrpomised patients. In order to diagnose the condition, various laboratory tests are necessary.

Nocardiosis is treated with antibiotics. Sulfonamides are the group of antibiotics that are indicated for infections with Nocardia bacteria.

Surgical drainage of abscesses may be necessary. Drainage is indicated for easily accessible abscesses, brain abscesses or any abscess that is growing despite at least 2 weeks of antibiotic treatment.