Gastric emptying is the process by which the stomach empties its contents into the duodenum of the small intestine for further digestion of food and absorption of nutrients. While this may seem like a simple process, it is carefully coordinated so as not to overwhelm the duodenum with large amounts of partially digested food mixed with the acidic gastric secretions, which is collectively known as chyme. 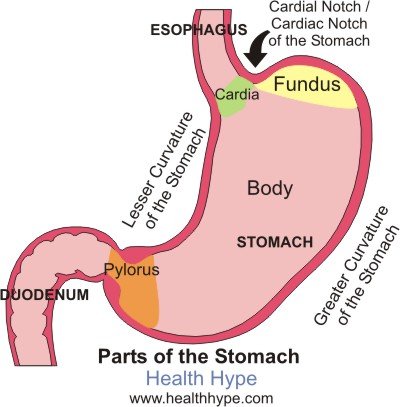 The stomach is a muscular, hollow organ. When food enters the stomach, it is churned by the stomach contractions (peristalsis) with gastric secretions (refer to Gastric Acid Secretion) and this allows for both mechanical and chemical digestion. Most of this churning occurs within the body of the stomach where the muscle contractions are weak.

The distal part of pylorus has a thick muscular wall arranged in a circular manner which remains contracted in a normal state. This is known as the pyloric sphincter. Even though it is contracted, the sphincter is not totally closed and there is gap which allows fluids like water or chyme to move through into the duodenum but prevents the movement of larger food particles.

The vagus nerve is mainly responsible for parasympathetic stimulation to the stomach. This increases peristalsis and opens the pyloric sphincter. Sympathetic stimulation via the celiac plexus inhibits peristalsis and the opening of the sphincter. This is influenced by brain stem as well as stimuli from the sensory nerve endings in the gastric epithelium. Refer to Stomach Nerves for more information on the stomach nerve supply.

Certain local factors within the stomach and duodenum promote the pumping of chyme through the pyloric sphincter and decreases the tone of the sphincter muscles, thereby widening the opening. The local factors within the stomach that promote gastric emptying are relatively weak compared to the control exerted by the duodenum. Stretching of the stomach wall and the hormone gastrin increases the activity of the pyloric pump. Since gastrin secretion is increased by the presence of certain foods in the stomach, this can also be seen as a factor for increasing the activity of the pyloric pump.

The greater the stimulation by the inhibitory reflexes and the greater the CCK and GIP secretion, the slower the rate of gastric emptying.

A slow stomach is a common term that is used to describe delayed gastric emptying. This means that the contents of the stomach are not released into the duodenum at a normal rate. It may be related to a disorder with the :

Causes of gastroparesis include :

The mechanical obstruction may lie in the duodenum or within the pyloric channel (intrinsic). Any mass outside of the organs surrounding the stomach and duodenum may also cause an obstruction to the flow of chyme (extrinsic).

Causes of gastric outlet obstruction include :

The signs and symptoms of delayed gastric emptying, whether due to a mechanical obstruction (gastric outlet obstruction) or stomach nerve and muscle disorders (gastroparesis), may be of a sudden or gradual onset.

Any disruption in normal gastric emptying causes a build up of undigested food, partially digested food particles, and chyme. Further eating or drinking may cause a backflow resulting in nausea and vomiting. The fairly ‘stagnant’ gastric contents are prone to bacterial overgrowth within the stomach resulting in fermentation of food. Partially digested food can coalesce and harden into solid masses known as bezoars. This can cause further obstruction of the pyloric canal.

Gastroparesis and gastric outlet obstruction are usually of a gradual onset. However, gastroparesis due to vagal nerve damage after surgery may result in the sudden onset of the signs and symptoms of delayed gastric emptying. The most severe symptoms may be noted in complete gastric outlet obstruction which is rare unless the condition has been left untreated for a prolonged period of time.

Since gastroparesis and gastric outlet obstruction occur secondary to an underlying disorder, the clinical presentation may vary depending on the cause.

The common signs and symptoms of delayed gastric emptying includes :