Most of us associate a burning sensation with a heat source but it is common symptom that usually indicates irritation or inflammation. The location of the burning sensation is usually the site of injury or tissue damage. Burning on the outer surface of the nose may be due to a number of causes, some of which are the same as burning inside the nose. Sometimes a burning sensation may precede the onset of pain or other symptoms and can therefore serve as an early warning of some nose problem. 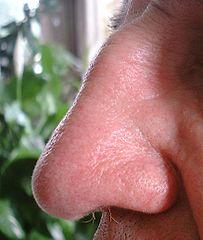 Causes of Burning Outside Nose

The nose has both external and internal parts. It is important to identify where the burning is located as this can indicate possible causes.

On the surface we can see the nose as a protrusion from the face that starts from the forehead between the eyes (root of the nose) which extends downwards ending above the mouth by the upper lip. The broadening of the nose at the lower end accommodates two openings known as the nasal meatus which allows for the flow of air into and out of the body. The skin and cartilage of the sides of the nose and around the openings are known as the ala which form a rounded protrusion that we refer to as the tip of the nose.

Injury to the nose is not uncommon. It can occur with a blow to the face or a penetrating injury. Vigorous picking of the nose usually as a means to clear the nostrils can also lead to trauma of the outer nose. Excessive wiping of the nose often due to a runny nose is another possible cause of trauma especially over a long period of time or very vigorous wiping. Nose piercings are another possible cause of trauma to the nose which may become complicated if an infection arises at the site of the piercing.

Another common cause of burning of the outer nose is an infection usually of the nasal passages. The common cold is an acute viral infection where a runny nose and sneezing are the main symptoms. The inflammation may extend to the outer nose but usually burning is a result of excessive wiping. There are several different infectious agents that can cause rhinitis (nose inflammation) which may also affect the sinuses (sinusitis) or throat (pharyngitis).

Allergies are another common cause of burning. Allergic rhinitis is a common allergic condition often associated with asthma and/or atopic dermatitis (eczema) especially in childhood. Often the eyes are affected as well and jointly it is known as rhinoconjunctivitis. Allergies are due to a hyperactivity of the immune system where it reacts to otherwise harmless substances. Pollen, house dust mite feces and animal fur/hair are some of the common inhaled triggers (allergens).

These are the other common signs and symptoms seen with conditions like allergic rhinitis and nose infections.

The treatment depends on the cause. Viral infections like a cold or flu does not require treatment and will usually resolve spontaneously within a few days. Bacterial infections require antibiotics. Allergies may require antihistamines, corticosteroids and other drugs to modulate the immune system. However, there are simple conservative measures that can sometimes relieve the burning but the underlying condition should be treated to prevent a recurrence of the burning sensation.