Nasal symptoms are not uncommon, particularly during the flu season, with a common cold, a strong odor or dust. Sneezing, a runny nose and nasal congestion are usually acute nose problems.It lasts for a few hours to days and then resolves. For some people, with a conditions like allergic rhinitis, these nose symptoms can be ongoing for months or even years.

The nose extends beyond the protrusion we seen on the surface of the face. It extends as a cavity into the skull, known as the nasal cavity. Air flows in and out of the nose through the nostrils. The lining of the nasal cavity contains receptors which allows it to detect chemicals. This is known as the sense of smell.

Incoming air also filtered and warmed in the nasal cavity before it travels down the airways to the lungs. Overall the nose plays several important roles. When the nose is affected by any disorder or disease, it can lead to various nasal symptoms that can affect breathing, smell, vocal tone and even eating and sleeping among other activities. 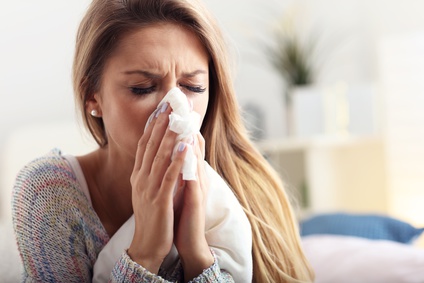 Also known as nasal congestion, this is the obstruction of the nasal passages usually with mucus build up. The mucus may also dry up to form crusts and small hard masses.

Also known as a leaky nose or rhinorrhea, it is the excessive flow of watery discharge (mucus) from the nose. The excessive mucus may also pass to the back into the throat. This is known as postnasal drip.

Sudden and forceful expulsion of air and mucus from the nose. It is often accompanied by other symptoms like an itchy nose and runny nose.

Discharge of blood from the nostrils is a result of bleeding within the nasal cavity or from the paranasal sinuses. This is also known as epistaxis.

Soreness or pain of the nose or within nasal passages. It may also present as a headache when it involves the paranasal sinuses.

Deformities can range from a deviated septum to a perforated septum. Swelling of the nose and around the nostrils may also cause the nose to appear enlarged and deformed. 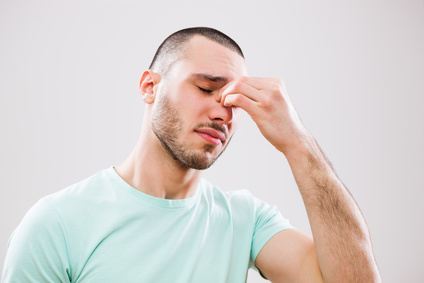 Excessive mucus secretion which leads to nasal congestion (blocked nose) is mainly due to inflammation. There are several reasons for this inflammation which can be broadly divided into infection and non-infections. Upper respiratory tract infections, more frequently caused by viruses like the flu or common cold, are on of the more common causes. Bacterial infections are also relatively common.

Allergic rhinitis is another common cause of a blocked nose. The hypersensitive nasal lining produces excessive amounts of mucus (hypersecretion). Other causes of a blocked nose may be due to a nasal polyp or deviated septum, which can also impair mucus drainage from the nasal cavity.

However, it is important to note that acute nasal congestion may not arise with either infections or allergies. Trauma to the nose can be physical or chemical in nature. It irritates and injures the inner nasal lining which triggers excessive mucus production. Smoke, chlorinated water and even picking the nose are come of the possible causes of mechanical and chemical trauma.

Both a running nose and sneezing are due to many of the same causes as a blocked nose. Irritation, injury, infections and allergies trigger inflammation of the nasal lining. Even changes in temperature may trigger sneezing and a runny nose. These factors can stimulate sneezing and the associated excessive mucus production can leak through the nostrils (runny nose).

Clear to white mucus is common. However, the mucus can also be brown, yellow and green which are more likely with infections. Sometimes a clear discharge is not mucus but cerebrospinal fluid (CSF). This rhinorrhea is a result of a CSF leak and tends to occur after traumatic head injury.

Most nosebleeds are acute. It arises suddenly and resolves in a short period of time without recurring. It is usually due to trauma to the nose. From a blow to the nose to aggressive picking of the nose, the bleeding resolves quickly with direct pressure. However, these bleeds can also sometimes be more serious in nature, as may be seen with excessively high blood pressure and even cancerous growths in the nasal cavity.

Injury, infections and even allergies may be responsible for these disturbances in the sense of smell. It can also occur with diseases and disorders of the nerve carrying signals from the smell receptors to the brain. Sometimes it can be due to serious conditions like a growth pressing the nerve and interrupting signals. This can lead to smell impairment.

Pain may be related to mechanical or chemical injury to the skin, nostrils, nasal lining or nasal septum. This can range from trauma like a blow to the nose, or vigorous nose picking, to inhaling toxic fumes or snorting substances such as tobacco or cocaine. Infections may also account for pain, particularly a sinus infection or referred pain from a dental infection.

Various growths can occur inside the nose. The more common of these growths is a nasal polyp. It protrudes from the lining of the nose and can obstruct the nasal passages. Other benign (non-cancerous) tumors can also occur in the nasal cavity. Malignant growths (cancers) are not common in this region but may occur.

Deformity of the nasal structures may be apparent externally. This may be seen in trauma (‘broken nose’) or with conditions like rhinophyma. Damage and even perforation of the septum may be a result of trauma, snorting cocaine or tobacco (‘snuff’), inhaling organic and non-organic dust or granulomatous diseases.