There are times in life when we expect to tear to the point that it will cause the eyes to look watery and for tears to even run down the face. This occurs when crying, with strong emotion (fear, anger and joy) even if not crying as such, when exposed to airborne irritants (like smoke) and during yawning. This does not indicate a disease state. Usually the tearing is from both eyes, although there may be some degree of variance where one eye may tear slight more than the other. However, tearing of one eye is more likely to be indicative of some underlying problem, usually in the eye or tear gland/ducts of the single watery eye.

It is firstly important to understand that tearing is a normal mechanism by which the eyes are moisturized and protected. The eye is exposed to the external environment and unlike skin, it cannot retain its natural tissue moisture. As a result it would become dry without tearing. Furthermore tears can help to flush away chemicals and microbes that may injure and infect the eye. Tearing itself is not the issue, and the odd bout of excessive tearing that is short-lived is also not a cause for concern. However, excessive tearing is a problem and is medically referred to as epiphora.

Tears are produced in the tear glands, or lacrimal glands. It is secreted through tiny duct known as lacrimal ducts and pushed by the eyelid around the eye surface. The tears then drain out into the channels known as the lacrimal canaliculi and passes into the nasolacrimal sac. It eventually empties into the nasal cavity. Normally there is a balance between the tear secretion, drainage and loss of fluid into the environment by evaporation so the eyes are not too dry nor watery. There are instances where tearing is not excessive but the drainage of tears is not adequate leading to watery eyes. 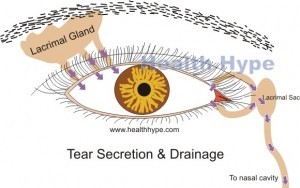 Tear secretion and drainage from the eye

Causes of One Sided Tearing

Tearing of just one eye is not uncommon. There are a host of diseases that only affect a single eye and only in some instances both eyes will be affected in these same conditions.

This is probably the most common cause of acute one sided tearing. Any foreign object that strikes the eye, gets impaled in it or remains trapped under the eyelid can continue to irritate the eye for a while until it is removed. Common objects include sand and dust.

The cornea is the transparent front part of the eye which can be injured easily with deeper penetrating objects like glass shards or even blunt force trauma with a blow to the eye. Depending on the severity of the injury, it can also result in corneal abrasion.

A corneal ulcer is an open sore that forms on the cornea. It can occur with chemical or mechanical injury but most cases are due to viral or bacterial infections. Contact lens wearers are often at a greater risk.

A bacterial, viral or fungal infection of the conjunctiva (conjunctivitis), cornea (keratitis) and/or eyelid (blepharitis) can also cause one-sided tearing although redness of the eye, burning and a gritty sensation are more common symptoms.

Poorly fitting, torn or worn out contact lenses can irritate just one eye at times. This in turn can lead to redness and tearing. It is more likely to occur in contact lens wearers who do not take the appropriate measures in managing their contact lens. 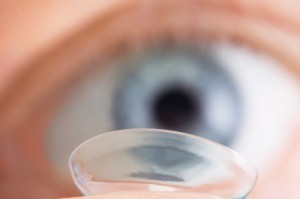 Although eyestrain is a common cause of excessive tearing along with redness, it is uncommon for it to affect only one eye. However, this can occur in some instances or where there are certain predisposing conditions of one eye that makes it more prone to strain.

Dacryocystitis is a condition where the nasolacrimal sac or duct becomes blocked and tears can therefore not be adequately drained. It is often caused by bacterial infections but may also be due to congenital problems in babies and age-related changes in older people.

A hordeolum is a pus-filled lump on the edge of the eyelid. It is often caused by bacteria and associated with poor hygiene or conditions resulting in chronic inflammation. Usually a hordeolum passes on its own within a few days and does not require treatment in most cases.

Facial palsy or Bell’s palsy is where one side of the face becomes suddenly paralyzed due to dysfunction of the facial nerve. The exact cause is unknown but it is associated with viral infections. It may occur for long periods of time but is usually temporary.

The treatment of one-sided tearing depends on the underlying cause. It varies among different types of conditions. Some conditions may not require any specific treatment and will resolve on its own, while others will require medication and/or surgery. One-sided tearing that is severe, persistent and associated with other symptoms like redness of the eyes, burning and/or visual disturbances requires medical treatment. It should not be managed with over-the-counter medication. A doctor must be consulted.

In the short term a few simple measures may help to relieve the symptoms temporarily: