Despite its size and weight, the pituitary gland is an extremely versatile organ and the main regulator of most of the endocrine system. It is often referred to as the master gland as it releases most of the trophic hormones – these are chemical messengers that act on other glands thereby stimulating or suppressing the activity of the target gland.

There are five types of cells in the pituitary gland which produce and secrete different hormones : 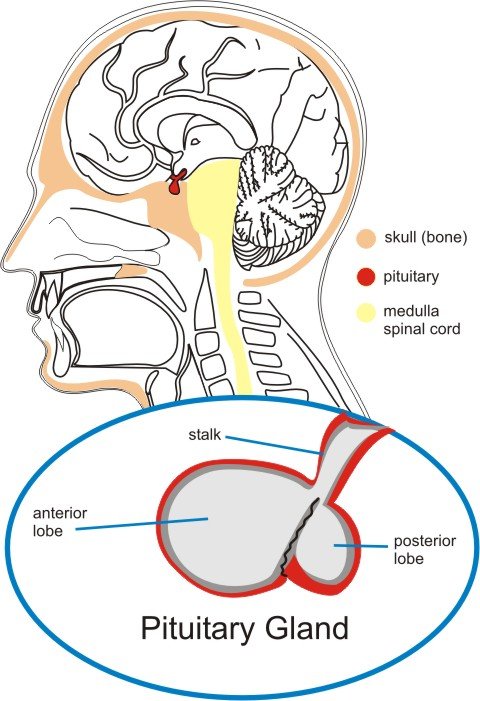 Adenomas are classified according to the hormone that its cells release. Most secrete one hormone but some may secrete two. Rarely there are adenomas that may secrete more than two hormones (plurihormonal).

The most common of the pituitary adenomas is a prolactinoma and as the name suggests it primarily secretes the hormone prolactin. This causes high prolactin levels known as hyperprolactinemia and can affect both males and females. Prolactin is primarily responsible for stimulating growth of breast tissue and stimulating breast milk production. In females this causes lactation even when not pregnant (galactorrhea). The same can happen in men but it is rare. Breast swelling and enlargement may be seen in both genders and in men this is known as gynecomastia.

Prolactin also has another important effect – it affects the secretion of luteinizing hormone (LH) and follicle stimulating hormone (FSH). Both of these hormones affect the growth of the gonads (sex organs) in males and females as well as promotes the production and secretion of the sex hormones (hypogonadism). In females this will present as amenorrhea (cessation of periods) or oligomenorrhea (scanty, irregular periods) and in males it may present as erectile dysfunction and a low sperm count. Loss of libido and infertility may be present in both males and females.

A somatotropinoma is a benign growth (adenoma) of the somatotroph cells in the pituitary gland and the second most common type of pituitary adenoma. The somatotroph cells are responsible for synthesizing and secreting growth hormone (GH). This versatile hormone is important in promoting growth in the body. It also affects the metabolism by increasing protein synthesis, decreasing fat stores by promoting the use of fatty acids for energy and regulating blood glucose levels. An excess of growth hormone will contribute to derangements in the target tissues in slightly different ways in children and adults.

In adults, the excess of growth hormone causes acromegaly which develops slowly over years. The bones at this age cannot grow in length and instead become deformed. There is an overgrowth of the jaw which then protrudes, the hands and feet swell, the voice becomes hoarse and thickening of the ribs cause a barrel chest. Sexual dysfunction with menstrual irregularity in women are other features that may be seen. It should be noted that a growth hormone and prolactin combination adenoma may develop thereby contributing to some of these clinical features.

Corticotropinomas or corticotroph adenomas are benign tumors of the pituitary gland that lead to an excess of the hormone adrenocorticotropin hormone (ACTH). This hormone acts on the adrenal cortex and due to secondary effects can cause an overactive adrenal gland. While ACTH stimulates the secretion of cortisol from the adrenal cortex, there may be a slight increase of the other adrenocortical hormones like androgens. High cortisol levels in the bloodstream is known as hypercortisolism which leads to clinical features known as Cushing syndrome.

Cortisol has a variety of functions in the body including regulating the metabolism of carbohydrates, proteins and fats. It also affects the body’s inflammatory processes and immunity. In Cushing syndrome, there is a number of non-specific signs and symptoms but the condition is most often noted by physical features like fat accumulation in the upper body, purple to brown stretch marks (striae), excessive hair growth on the face particularly in women (hirsutism), thinning hair and easy bruising. Read more on Cushing syndrome signs and symptoms for a complete list of clinical features.

The clinical features of hyperthyroidism may include unexplained weight loss, intolerance to heat, excessive perspiration, anxiety, diarrhea, rapid heartbeat, sleeping difficulty and fatigue. There may also be an enlargement of the thyroid gland known as a goiter.

The clinical features of excess luteinizing hormone (LH) and follicle stimulating hormone (FSH) are not always as clearly defined as it is with hormone excess in other pituitary adenomas. Menstrual irregularity in women and erectile dysfunction and low sperm count in men may be present but can be variable. Infertility may be reported as well as low energy levels and a loss of libido. Other non-specific symptoms include blurred or double vision and headaches.