Swallowing is one of the normal reflexes in the body present from birth. It pushes the contents of the mouth (food, beverages and saliva) down the throat and into the esophagus where it is shuttled down to the stomach. This process should not be painful. When there is pain on swallowing then it needs to be investigated further.

Odynophagia is the medical term for pain when swallowing. The pain may arise in the mouth, throat (pharynx) or esophagus (gullet). At times, odynophagia may also be related to problems within the larynx (voice box and vocal cords). It can affect eating and drinking to the point that overall nutrition is affected. Odyophagia (pain) must not be confused with dysphagia (difficulty swallowing) although both may occur simultaneously. 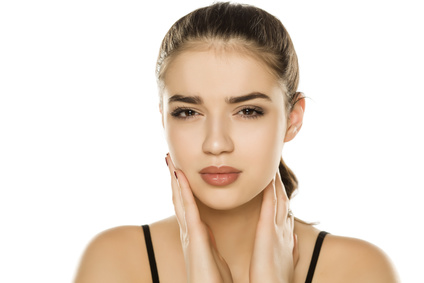 The mechanism of swallowing is both voluntary and involuntary and starts in the throat and extends to the eosphagus. While pain during swallowing may be felt in the mouth or throat (oropharyngeal causes), when the problem is with the esophagus then it may present as chest pain. It can be mistaken for heartburn or even cardiac pain.

Pain is a symptom. It may occur with other symptoms, typically involving the same area – mouth, throat or esophagus. Collectively these symptoms are usually due to the same cause. Painful swallowing may present with other mouth, throat and esophagus symptoms that either arise with or worsen when swallowing.

Pain when swallowing may present along with dysphagia (difficulty swallowing) or regurgitation. At times odynophagia may also be a feature of stomatodynia, which is pain in the mouth. In this case, the pain is exacerbated when swallowing.

Many of the inflammatory causes of mouth pain (stomatodynia), especially those extending to the throat, will present with an exacerbation of pain during ingestion, mastication (chewing) and swallowing. Another common complaint is a lump in the throat sensation, which may or may not be caused by a growth in the throat.

Pain when swallowing may also be noticed upon consuming certain foods, like hot foods or drinks. At other times, swallowing may present with some discomfort and mild pain that is most pronounced in the morning after awakening and eases during the course of the day. The modalities are important indicators for a possible cause.

Hot drinks and foods that result in pain upon swallowing is indicative of lesions in the throat, like an ulcer. Morning odynophagia may be related to severe gastroesophageal reflux disease (GERD) which causes reflux pharyngitis. A persistent sore throat in the morning is another complaint in reflux pharyngitis.

Odynophagia that presents with dyspnea (difficulty breathing) or dysphonia (hoarse voice, whispering voice) may be indicative of pathology within the larynx or trachea or a partial obstruction of the throat. There may also be chest wall pain and difficulty with deep breathing. Pain when swallowing along with symptoms like spitting or coughing up blood needs to be immediately investigated.

Any infection of the mouth, throat or esophagus as well as the airway can cause painful swallowing. Acute or chronic infectious stomatitis (mouth), tonsillopharyngitis (tonsils, throat), epiglottitis (epiglottis) and esophagitis (esophagus) may result in odynophagia.

It is more pronounced in severe infections and in certain cases, dysphagia (difficulty swallowing) may also be present. Many patients with an infection of the mouth, throat or esophagus will only report odynophagia as the main symptom in chronic infections.

These infections may cause sores, ulcers, abscesses or diffuse inflammation in the related structure. Some of the infectious causes of odynophagia include : 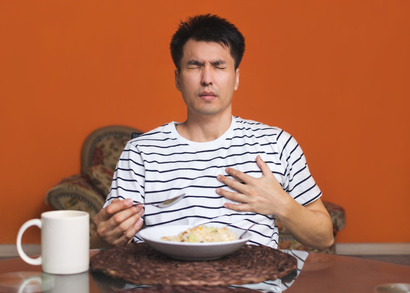 There are a number of non-infectious causes of inflammation and ulceration within the alimentary tract. Inflammation of the larynx may also result in odynophagia, due to the role of the larynx in the swallowing reflex. The causes may be related to trauma (after diagnostic investigations, hot foods/drinks, caustic substances), autoimmune diseases, radiation, acid (GERD) and inhalation of toxic gases. An abscess or ulcer in the throat or esophagus will also result in odynophagia.

Cancer of the mouth, throat, larynx, thyroid, neck, and esophagus may result in odynophagia. This should be considered as a possible cause in high risk patients like cigarette smokers, especially if it is accompanied by dysphagia and unintentional weight loss. Metastases is where cancer spreads from the site where it arises. It should always be a consideration in a cancer patient who complains about odynophagia (painful swallowing) and/or dysphagia (difficulty swallowing).

The following conditions affecting mainly the esophagus may present with odynophagia. Pain in the chest is usually present as a result of esophagus pain. Patients often, quite incorrectly, report the symptoms as pain after swallowing, although it is related to the involuntary esophageal stage of swallowing.

Odynophagia (pain when swallowing) is a symptom. Certain treatments can help to reduce the discomfort and pain but the underlying cause must eventually be treated. Therefore there is no specific treatment for odynophagia since it arises due to such varied causes. However, the following medication, dietary and lifestyle changes may help.