As with skin anywhere on the body, the color of the skin on the legs are due to a combination of factors. This includes the amount of melanin production by the skin, blood flow, body hair and so on. Melanin is the brown pigment and variations among humans are due to genetic factors. Men tend to have more hair and thicker hair on the legs than females and the color of the hair contributes to the overall color. When it comes to paleness though, this is mainly due to the amount of blood flow in the superficial vessels of the legs.

The skin and underlying tissues are nourished by a network of tiny blood vessels. Oxygen and nutrients are carried to the area by the arteries and smaller arterioles. Wastes and carbon dioxide are carried away from the area by the veins and small venules. This ensures that the tissues in the region have adequate resources to sustain life. The blood flow in these tiny superficial vessels are partly responsible for the color of skin, especially in lighter-skinned individuals.

Blood that is rich in oxygen has a redder hue than blood that is low in oxygen concentration. Therefore the redness of an area when there is no inflammation is related to the oxygen concentration of the blood as much as it is due to the amount of blood flowing through the vessels. Tiny muscles in the vessel walls can constrict or relax to narrow or widen the vessels. This is known as vasoconstriction and vasodilation respectively. It allows for an increase or decrease in blood flow which is mainly controlled by nerves to the blood vessels as well as other factors. 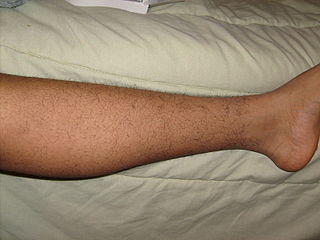 Pallor (paleness of the skin) is either due to too little blood flowing to an area or low oxygen levels of the blood flowing in the vessels. It may occur with:

The paleness of the legs is often accompanied by other symptoms in time such as a bluish discoloration, coldness of the area, pain, tingling and numbness. Sometimes swelling of the legs may also occur simultaneously. When the paleness and other symptoms only occurs in one leg then the problem is most likely in that specific leg, for example peripheral arterial disease involving only one leg. However, when the paleness occurs in both legs then the problem is usually higher up in the body usually within the trunk like in heart failure. 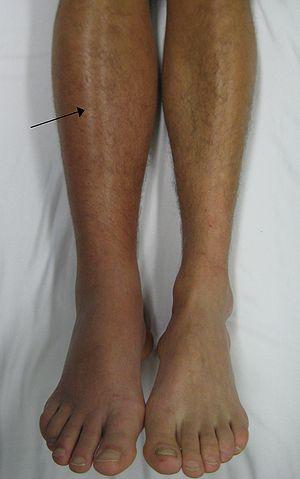 A bluish tinge of the skin is known as cyanosis. It is a very serious sign of low oxygen levels and a build up of carbon dioxide. Many conditions where pallor arises can eventually progress to cyanosis if the condition is not treated or if it becomes worse over time. At this stage the tissue is severely starved of oxygen and becomes injured. Eventually the tissue can die unless the oxygen supply to the area can be restored. When it occurs on the superficial layers then the skin can be seen turning blue as compared to when it occurs in internal organs where this bluish discoloration is not visible.

Blood not only distributes oxygen and nutrients but also carries heat to the distal parts of the body such as the lower legs and feet. There is also significant heat loss as it travels down the length of the legs which are not able to retain heat as effectively as the trunk. The situation is further complicated if a person is not wearing appropriate clothing to preserve heat in the legs and feet. When the blood flow to the legs are restricted then the legs will understandably be cold to touch. This restriction may stem from insufficient blood output from the heart, narrowed arteries that carry blood to the legs or vasoconstriction of the superficial blood vessels only. It usually correlated with the paleness.

Leg pain that may or may not be related to paleness of the skin. It is more likely to occur when the leg requires a greater supply of oxygen, like when running, but the blood oxygen levels are insufficient. This type of tissue injury due to insufficient oxygen is known as ischemia. When the ischemia worsens eventually it can lead to cell death of certain areas.

In conditions like peripheral arterial disease the narrowing of the artery presents with leg pain when walking or lying flat in particular. With deep vein thrombosis (DVT) the leg pain is often worse when being immobile for long periods. However, it is also important to note that leg pain can occur with paleness of the leg yet both symptoms occur for different reasons.

Paleness with Tingling and Numbness

As with pain, other abnormal sensations that occur in the legs may or may not be related to the paleness that is present at the same time. Two  abnormal sensations that are commonly reported are tingling and numbness of the legs. These sensations may sometimes occur simultaneously with pain, just before the pain arises or once the pain subsides. Nerves also need an adequate blood supply or abnormal sensations like tingling and numbness may arise if there is an insufficient oxygen supply. It can occur as part of the circulation problem in the entire leg or just the nerve itself is affected as is the case in conditions like diabetic neuropathy.