The mucosal epithelium lining the nasal passages ensures that a constant supply of mucus maintains the health of upper respiratory tract. The movement of air has a drying effect so the mucus keeps the area moistened. Dust and airborne microbes are trapped in the mucus and not allowed to travel deeper into the respiratory tract. The action of the mucus is aided by the large nose hairs that can be clearly seen in the nasal cavity. Very small hair-like projections known as cilia which are invisible to the naked eye help ‘push’ the mucus along in order to drain out the nasal cavity.

The nasal lining produces small amounts of mucus, some of which dries when close to the opening of the nose, passes out through the front of the nose or slowly drips into the back of the throat. The lining of the sinus cavities also contribute to the mucus in the nasal cavity. The mucus drainage occurs so slowly throughout the day that most people swallow it without being aware, although it can sometimes be spat out through the mouth. However, if the mucus secretion increases excessively then the drainage through the back of the throat, just as it is through the nose, becomes more pronounced and referred to as a post-nasal drip or runny nose respectively.

What is Post-Nasal Drip? 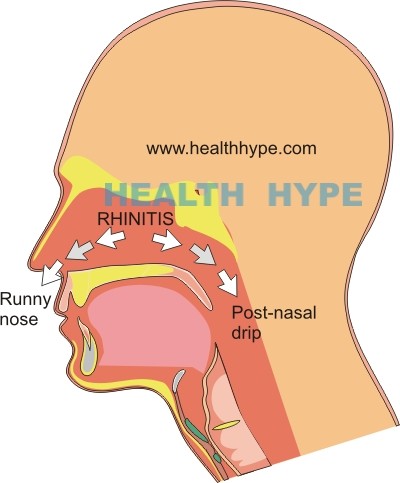 When the nasal mucosa is irritated by microbes, allergens, environmental pollutants or foreign bodies, various changes occur in the tissue which is known as inflammation. More fluid escapes from the local capillaries causing the area to become swollen and congested. Nerves lining the nose perceive this as itching and sneezing occurs. The mucous glands in the epithelium become more active and therefore more mucus is secreted. While these effects may arise within seconds or minutes of exposure to an irritant, it usually takes several hours for it to progress to a point where the symptoms are intense and causing significant discomfort.

Since the mucus is now more profuse and often thicker than normal, it may causes irritation to the throat. At the same time the excess mucus and any disruption in the normal swallowing reflex may lead to partial drainage into the lower parts of the respiratory tract. This elicits a cough and contributes to infections of the lower respiratory tract. The accumulation and irritation of the larynx also leads to hoarseness (dysphonia).

The normal nasal mucus is thin and clear (serous) but with some causes of post-nasal drip, the mucus becomes thick and ropy (phlegm) and/or white to yellow, sometimes even green, in color (pus). Acute causes tend to cause a serous exudate, although this can progress to a more viscid discharge (phlegm) within days of persistent secretion like a viral upper respiratory tract infection. Pus is indicative of a bacterial infection. Although a post-nasal drip is associated with excessive mucus secretion, any disruption with normal drainage through the front of the nose can also exacerbate the condition.

Rhinitis is the cause of post-nasal drip and a runny nose and varies depending on the type of rhinitis. It can be broadly divided into allergic rhinitis and non-allergic rhinitis. Of all the causes,  an upper respiratory tract infection is by far the most common.

Allergic rhinitis is an immune mediated hypersensitivity to certain allergens that are not otherwise noxious. The common allergens include house dust mite, pollen, cockroaches, molds and animal hair/fur. It can persist throughout the year in which case it is known as perennial rhinitis or occur seasonally and is therefore referred to as seasonal rhinitis. Allergic rhinitis causes a persistent runny nose, nasal congestion and/or post-nasal drip. It is more frequently seen in individuals with an allergic constitution (atopy) who are also more likely to suffer with allergic asthma and atopic dermatitis (eczema). These individuals are also more likely to suffer with upper respiratory tract infections and have a greater sensitivity to common airborne irritants like smoke and gases (which are not allergens).

Infections are the most common non-allergic cause. It more frequently occurs with acute viral infections of the upper respiratory tract caused by the influenza, parainfluenza, respiratory syncytial and rhinoviruses. Simply this is more frequently seen as the common cold or flu (seasonal influenza). Bacterial infections of the nasal cavity are less common and tend to arise after a viral infection (secondary) or with defects or disturbances of the nasal and sinus cavities.

Other causes are more accurately described as non-allergic non-infectious rhinitis (NANIR) and includes :

The characteristic symptoms of post-nasal drip are :

The presentation may not always be as clearly evident and patients may describe the need to constantly clear the throat, a tickling in the throat or an itchy throat. Other signs and symptoms include :

Many of these symptoms are more prominent with acute causes like an infection. Symptoms also tend to be worse at night.