What is a prolactinoma?

A prolactinoma is a tumor that secretes prolactin, the hormone that is responsible for stimulating milk production. Normally prolactin is secreted in controlled amounts by the pituitary gland, the master gland that sits at the base of the brain and controls most other glands in the body. A prolactinoma arises when a tumor grows in the portion of the pituitary gland that has prolactin-secreting cells. It is a benign tumor meaning that it is non-cancerous. A prolactinoma can be very effectively treated with medication in most cases but sometimes surgery and even radiation therapy may be necessary.

How common are prolactinomas?

The pituitary gland secretes a number of different hormones that regulates different glands in the body to either increase or decrease the production and secretion of its respective hormones. Prolactin is produced by lactotrophs which are specialized cells in the anterior pituitary. There are many other factors that control the production of prolactin, most of which come from the hypothalamus. The primary function of prolactin is to stimulate breast milk production. It acts by binding to prolactin receptors on the mammary gland tissue. However, there are various other organs and tissues that have prolactin receptors such as the heart, lungs, skin, adrenal glands and central nervous system. Although prolactin itself may not have as pronounced an effect on these organs, it can still have influence other organs and systems indirectly by interfering with the secretion of other hormones.

Thyrotropin-releasing hormone (TRH) is one of the main hypothalamic hormones that stimulates prolactin production in the anterior pituitary. Other stimulating factors include hormones like estrogen, which are naturally higher than normal during pregnancy and therefore accentuates breast milk production. Hormones and other stimuli that promote the release of prolactin are therefore known as prolactin-releasing factors (PRFs). Dopamine, a neurotransmitter is one of the main factors that inhibit prolactin secretion. It is therefore referred to as prolactin-inhibitory factors (PIFs). By the way of these prolactin releasing- and inhibitory-factors, the hypothalamus ensures that the prolactin levels are kept within a normal level.

A prolactinoma is an overgrowth of cells of the prolactin-secreting area of the pituitary. It is a benign tumor known as an adenoma. It leads to an excess of prolactin in the circulation and there a wide range of consequence associated with hyperprolactinemia (excess prolactin in the blood). The main effects arise in the breast. Excessive prolactin causes enlargement of the breast tissue in both males and females. This is known as gynecomastia in males. Breast milk production also occurs even without pregnancy and breastfeeding. Prolactin also inhibits gonadotropin-releasing hormone (GnRH). Normally GnRH would stimulate follicle-stimulating hormone (FSH) and luteinizing hormone (LH), two hormones secreted by the pituitary which acts on the ovaries of females and testes of males. FSH and LH are responsible for the reproductive functions in both males and females. Therefore infertility arises. These are the main consequences of hyperprolactinemia.

The signs and symptoms of a prolactinoma are due to :

At times there are no signs and symptoms present, particularly with small prolcatinomas. There may be gender-specific symptoms for males and females. However, generalized symptoms of a prolactinoma include :

Both males and females experience a disinterest in sexual activity.

The cause of a prolactinoma is not known. In the majority of cases there is no family history or other clearly identifiable cause that accounts for the development of these tumors. It tends to be more common among women in the 20 to 60 year age gap but no other significant risk factors have as yet been identified. The pitutary gland does enlarge during pregnancy and prolactin secretion does increase during this time as a result of gestation but this physiological change is not a prolactinoma or hyperprolactinemia. 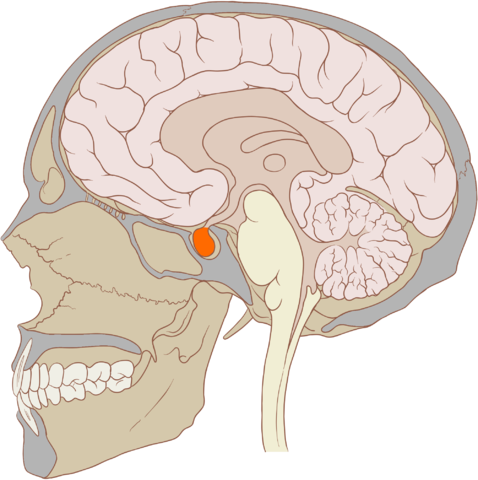 The presence of some of the signs and symptoms mentioned above warrant further investigations to confirm the diagnosis. It is not always the symptoms of a prolcatinoma that are evident, but other pituitary hormone deficiencies which are compromised as a result of the prolactinoma. Blood tests that assess the level of prolactin are necessary. However, it is important to note that hyperprolactinemia is not only caused by a prolactinoma. Therefore imaging studies like a CT (computed tomography) scan or MRI (magnetic resonance imaging) are necessary to confirm the presence of the mass.

Other tests may also be conducted to confirm the diagnosis, exclude other conditions and evaluate the extent that the mass is compressing surrounding structures. These additional tests include :

Not every case of a prolactinoma needs treatment. Hyperprolactinemia can be treated with medication. Surgery is only indicated if the tumor has reached a size where it is causing other symptoms due to compression of surrounding structures.

There are two drugs that are commonly prescribed for the treatment of hyperprolactinemia – bromocriptine and cabergoline. These drugs mimic dopamine and are known as dopamine agonists. It attaches to the dopamine receptors on pituitary gland. The reason why these agonists are effective is that naturally occurring dopamine is one of the inhibitors of prolactin secretion from the pituitary gland under normal circumstances.

There are other more potent dopamine agonists but some are not available in every country due to a host of side effects. Dopamine agonists like bromocriptine and cabergoline can shrink the tumor in the majority of cases. At times dopamine agonists are prescribed after surgery if the hyperprolactinemia does not resolve following removal of the tumor.

Surgical removal of the tumor is only indicated if a patient is non-responsive to medication and/or for masses that are causing other symptoms like visual disturbances as a result of it occupying space in the cranium. The preferred procedure is to enter the cranial cavity via the nose and through the sphenoid bone at the base of the skull. This procedures is known as a transsphenoidal pituitary adenomectomy. In the event that the mass is too large for a transsphenoidal approach, then a transcranial pituitary adenomectomy is done. In this approach the tumor ir reached by entry through the upper part of the skull. However, a transcranial approach is avoided as far as possible due to the risks associated with it.

Although a prolactinoma is a benign tumor, it may sometimes need to be treated with radiation. This is reserved for the rare cases where medication and surgery have both proven to be ineffective.