There are many types of growths that may arise in the body during the course of life. All are considered abnormal in that it should not be present. However, some form for very good reasons and it may be the body’s way of defending itself at times. A growth can refer to many types of masses, from an abscess to a benign tumor and even cancer. Polyps are one type of growth. It is any mass that is protruding within a cavity in the body. It is often seen in the nose (nasal polyps), stomach (gastric polyps) or bowels (intestinal polyps). Polyps are not the same as cancer, but some types of polyps have the potential to become cancerous over time.

What is a bowel polyp?

A bowel polyp is a growth (collection of cells) that protrude from the wall of the bowels (small and large intestine). Most occur in the colon (large intestine) and are usually harmless growths. In fact many people will never even know that they have an intestinal polyp. The majority of these polyps do not hold any risk of becoming cancerous and may be so small that it does not affect bowel function in any way. However, it is the small percentage of polyps that have the potential to become cancerous that is the cause for concern.

What is the cancer risk with colon polyps?

This is a common question and concern for people who have been diagnosed with colon polyps. As mentioned, it is a common growth in older people and holds a very small risk of being cancerous. In the United States, it is estimated that over 50% of people older than 60 years of age have colon polyps. These are considered benign growths although some may be classified as neoplastic based on the potential of it to become cancerous at a later stage. It is important to note that cancer potential does not mean that it will become cancerous. Less than 1% of bowel polyps become cancerous (malignant).

The cells that make up the inner lining of the bowels (mucosa) are constantly dividing to replenish damaged or worn out cells. This is a normal process that occurs in most parts of the body. The proliferation of cells in any tissue is very carefully coordinated by genes, among other factors. Sometimes there is a disruption leading to more cells being produced than should be, and this gives rise to clumps of cells that are known as growths. As previously mentioned, a polyp is a benign growth but some have the potential to become cancerous.

The exact reason why bowel polyps occur is not always clearly understood. It is known that it largely arises with a defect in genetic control, which may be due to mutations of genes. Certain types are associated with a strong family history, further supporting the genetic cause of polyp development. These are known as inherited polyposis syndromes. The likelihood of bowel polyps are also associated with:

Bowel polyps can also be classified as adenomatous or non-adenomatous. Since the most common type of non-adenomatous polyp is  hyperplastic polyps, sometimes it is just referred to as adenomatous or hyperplastic polyps. The term neoplastic and non-neoplastic are also used to describe polyps. Neoplastic simply means that the growth shows potential to become cancerous. Non-neoplastic does not have this cancerous potential. Other terms associated with polyps are sessile and pedunculated. It simply means that the growth has no stalk and extends along the colon mucus or may protrude outwards (sessile), or it has a stalk by which it protrudes (pedeunculated).

There are different sub-types of adenomatous and non-adenomatous polyps categorized by its shape, pattern of growth and/or cause. 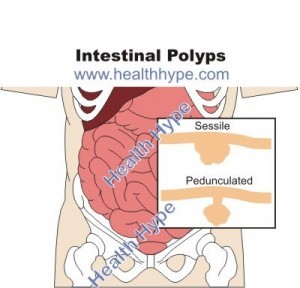 The majority of polyps never cause any signs or symptoms. Many people who have polyps therefore do not even know that these growths are present in their bowels. It is incidentally discovered upon routine investigation, like during a colonoscopy, which is widely used to screen for bowel cancers. Symptoms are more likely to occur with polyps that are larger although it is uncommon for a polyp to cause an obstruction in the bowels. On the other hand, sometimes the smallest of polyps can cause symptoms.

It is therefore important for people in high risk groups to watch out for:

Generalized symptoms like fatigue may also be attributed to these polyps. The presence of symptoms requires further investigation as it may be due to a polyp that has become cancerous, or even bowel cancer without any previous polyps. 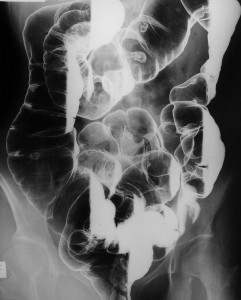 Polyps should be surgically removed once identified. There is no medication to “shrink” a polyp. Surgery is often quick in most instances and there is a low risk of any complication. However, removing a polyp does not mean that it may not recur in the future. Regular screening for polyps and other cellular abnormalities is advisable for patients who had a polyp, irrespective of whether it was small or of the type that is unlikely to be cancerous.

Many polyps are removed during screening procedures like a colonoscopy and further surgery is not necessary unless it recurs. If the polyp cannot be removed during screening, then a separate surgery may be scheduled for its removal. This is usually a minimally invasive procedure. However, there are rare instances where more radical procedures are necessary. When there is a high risk of colonic polyps becoming cancerous, then a portion of the bowel may need to be removed. With bowel polyps, this can either be a portion of the colon (colectomy) or the colon and rectum (proctocolectomy).