What protrudes through the anus?

Stool (feces) will naturally protrude through the anus while defecating. This protrusion is usually temporary. The stool is passed out into the environment and sometimes may retract until it is pushed out with further straining. In some instances people who are constipated and pass out very hard stool can find that it may become “stuck” partly protruding out of the anus. With wiping and sometimes even manual manipulation the stool may then be removed.

It is when organs or portions of it, and foreign objects protrude through the anus that there is often a cause for concern. The sensation can be uncomfortable and is sometimes even painful as is seen with a prolapsed hemorrhoid. The types of conditions and causes of protrusions through the anus need to be understood for proper treatment to be instituted. The more common conditions like hemorrhoids is not serious  but less common causes that may cause the sensation of something protruding through the anus could be deadly.

Hemorrhoids is a very common condition and is estimated to affect as many as 1 out of 2 people by the age of 50 years. Most cases can be prevented. The more common causes include sitting on the toilet for too long during bowel movements, straining to pass stool and chronic constipation or even diarrhea. People who are obese and pregnant women are at a greater risk of developing hemorrhoids.

Dietary change as well as changes in bowel habit can help to relieve mild cases without requiring medical treatment. For symptomatic cases medicated creams containing substances like hydrocortisone can provide relief but will not cure the hemorrhoids on its own with dietary and lifestyle changes. Sometimes surgery may be necessary and most of these procedures are minimally-invasive.

With age the connective tissue that supports the rectum may weaken and allow for the rectum to move in to positions that it should not. Weakening of the pelvic floor can also lead to a prolapse and is among the more common causes. It also tends to occur with age and childbirth which is why a rectal prolapse is more common among women. Long term straining and constipation may also contribute to a rectal prolapse.

Correcting the constipation with a high fiber diet and plenty of water among other measures should be immediately addressed when constipation is present. The prolapse can be manually pushed back into position and this is helpful in mild cases. However, in severe cases surgery is required to correct the problem. 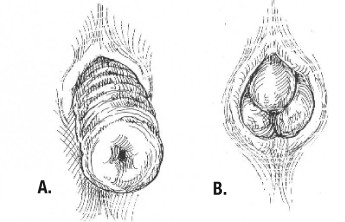 Suppositories are drugs that are administered through insertion into the rectum. It is a widely used form of drug where oral or injection forms are not practical and sometimes the rectal route of administration is preferred. Inserting a suppository can be difficult for a person who is not familiar with the procedure. If incorrectly inserted the suppository can protrude, especially if a person has been passing stool or large amount of gas (flatus). It can be easily remedies by pushing the suppository further up into the rectum where it will eventually dissolve.

Sometimes hard and large stool is not fully pushed out through the anus. Portions of hard stool may therefore protrude from the anus. It is a short term problem until the feces can be manually removed or if it retracts back into the anus. Although this is a not a common occurrence, it can happen in people who are constipated or have fecal impaction. The problem can be prevented in the future by using stool softeners and drinking large amounts of water so that the stool is soft and can break off as it is being evacuated from the rectum.