What is reflux laryngitis?

Reflux laryngitis is irritation and inflammation of the larynx due to stomach acid. It is a consequence of GERD (gastroesophageal reflux disease) where the acidic stomach contents spill into the esophagus (food pipe) and rise as high up as the throat. Initially it may cause some irritation of the larynx but over time, the recurrent exposure to acid can significantly damage the vocal cords and other structures in the larynx. GERD is a common condition but not every case will involve the larynx and throat – a condition known as laryngopharyngeal reflux (LPR). If GERD is well managed, it is unlikely that laryngeal and pharyngeal (throat) complications will ever arise.

The exact incidence of reflux laryngitis is difficult to estimate. Many cases may be silent (asymptomatic) and in other instances patients do not seek specialist medical care for the condition and it often remains undetected until symptoms are severe. However, it is known that reflux laryngitis is overall not as common as GERD (gastroesophageal reflux disease). As one of the most common conditions to affect the adult population, about half of all adults will experience GERD occasionally and up to 20% of these patients have chronic reflux. Reflux laryngitis affects only a small number of these GERD patients.

Movement of food through the junction between the stomach and esophagus is controlled by the lower esophageal sphincter (LES). This opens as food is passing down the esophagus thereby allowing it to enter the stomach. It otherwise remains tightly closed to ensure that gastric contents (food, fluid, stomach acid and enzymes) cannot pass backwards from the stomach into the esophagus. In GERD (gastroesophageal reflux disease) the valve is either temporarily or permanently dysfunctional allowing stomach acid and the other contents to flow backwards into the esophagus.

Since the esophagus cannot withstand the highly corrosive acid, it causes irritation and inflammation of the esophageal walls. This is experienced as the sensation of heartburn. Although GERD is a common condition, a large number of patients never experience any symptoms. In severe cases the stomach acid can pass high up into the esophagus, and even spill out of the esophagus into the throat (pharynx) and voice box (larynx). Inflammation of these areas due to the action of stomach acid is known as reflux pharyngitis and reflux laryngitis respectively.

The larynx is the passage between the throat and the airways – trachea, bronchi and then to the lungs. The entire airway is highly sensitive to irritants and the presence of the stomach acid may immediately cause a reaction. If it is not cleared out of the larynx, both the stomach acid and the activated stomach enzyme pepsin will damage the tissue lining the airway. It can destroy the tiny hairs in the lining of the respiratory tract known as the cilia. Mucus in the airways can therefore not be moved out of the tract carrying with it dust, dirt and microbes that are trapped within.

This process is further complicated by the a possible reaction of the pulmonary irritant receptors. Usually these receptors are a line of defense when dust and gases enter the airways and send signals back to the brain which then elicits coughing. The presence of the acidic stomach contents and mucus that collects within the tract  can also trigger these receptors. Incoming nerve signals to the walls of the airways causes coughing and narrowing (bronchoconstriction).  This hampers air flow through the airways and can exacerbate any pre-existing respiratory conditions. 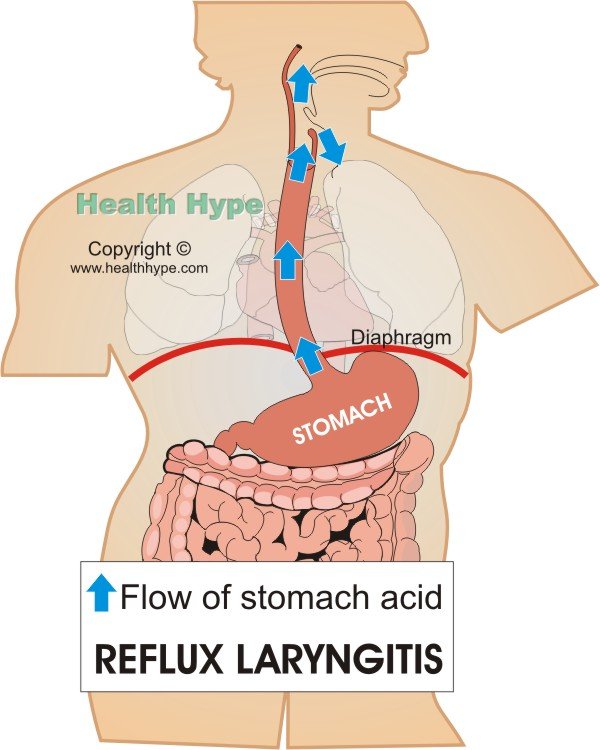 Reflux laryngitis is caused by the stomach contents entering into the larynx. The acid :

This irritation, injury and damage to the larynx and surrounding part of the airway is the reason for the symptoms of reflux laryngitis. However, it is important to consider the cause of gastroesophageal reflux disease (GERD).

Acute acid reflux happens occasionally in life with overeating, excessive alcohol consumption and vigorous physical activity immediately after eating a large meal. It often passes on its own and is unlikely to recur. These acute occurrences are still known as gastroesophageal reflux disease (GERD), but GERD is more often thought of as a chronic condition. In this instance a person experiences episodes of acid reflux on a regular basis, and sometimes even daily. However, many of these episodes are asymptomatic and a person may never experience any symptoms despite the backward flow of stomach acid.

The main cause of gastroesophageal reflux disease is lower esophageal sphincter (LES) dysfunction. The exact reason why this sphincter becomes dysfunctional is not always clear. It appears that the muscles become weakened and therefore cannot close the opening as tightly. It may also stem from a problem with the nerves supplying these problems. Other possible causes include :

The symptoms of  reflux laryngitis often overlaps with pharyngitis. Therefore it should be considered collectively. The main symptoms include :

There is usually a sore throat sensation. It is typically worse in the morning upon waking as GERD exacerbates at night. Sometimes the symptoms of the sore throat gradually eases during the course of the day and recurs again after sleep. The soreness may be worse when swallowing. Another common sensation is globus hystericus where a person feels a “ball” or “lump” in the throat despite there being no lump at the site.

Apart from the pain and discomfort, as well as the sensation of a lump in the throat, there are other symptoms associated with irritation and inflammation of the voice and throat.  The most notable of these is hoarseness of the voice as the acid reaches the vocal cords. There is a sensation of needing to constantly clear the the throat similar to post nasal drip. These symptoms are usually worse in cigarette smokers and in people who overuse their voice.

There may be difficulty swallowing (dysphagia), pain or discomfort when swallowing (odynophagia) and sometimes even gagging with irritation of the throat as a result of reflux. Most of these swallowing symptoms will subside with proper management of GERD. However, should the disease be prolonged then lesions may form that have to be treated separately even once the GERD is brought under control.

The supraesophageal effects (effects above the esophagus) of GERD may include :

Reflux laryngitis needs to be treated at the root – GERD. The medical treatment of GERD may be needed for a short period of time or is used as chronic medication. Surgery is only considered when medication fails to yield the desired results.

There are three main medication that is used for gastroesophageal reflux disease.

Lifestyle changes are an essential component of treating and managing GERD, and therefore reflux laryngitis.