What is renal artery stenosis?

Renal artery stenosis is a narrowing of the artery that carries blood to the kidney. It may occur in one or both arteries and its branches. When the artery is fully blocked then it is known as renal artery occlusion. As the artery narrows it reduces the blood flow to the kidney and this gradually compromises kidney function and even structure. As with narrowing of other arteries in the body, it tends to occur as a consequence of atherosclerosis where fatty plaques build up in the artery wall. Eventually blockage arises with a blood clot. Renal artery stenosis more often occurs in older patients and may account for about one-fifth of kidney diseases in people older than 50 years.

Anatomy of the renal artery

The renal artery arises from either side of the abdominal aorta. Just before the renal artery reaches the kidney, it branches off into 4 to 5 branches. The arteries accompany the renal veins and ureters to the hilum of the kidney (renal hilum). Sometimes there may be two or more renal arteries to a single kidney which are known as supernumerary renal arteries. Up to one-third of the blood pushed out of the heart (cardiac output) can empty into the renal arteries. Yet it is fairly narrow measuring about a quarter of centimeter in diameter (2.5 millimters or about 0.1 inches). 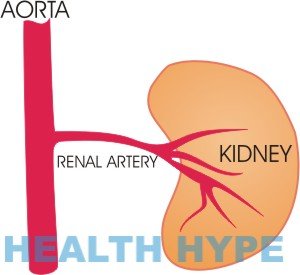 The renal artery carries oxygen rich blood the kidney. This blood is also laden with nutrients. The kidney tissue needs the arterial blood to continue living and functioning. In addition, the blood in the renal artery is also filtered with the waste substances being remove by the nephrons in the kidney. Eventually the wastes are excreted as urine. The kidney, by the way of altering the fluid and electrolyte levels in the blood, can control blood pressure, blood volume and many other processes. Therefore blood in the renal artery is the means by which the kidney has a host of different effects on the body.

Narrowing of the kidney artery (renal stenosis) has two implications :

This is a rather simplistic yet fairly accurate way to view the effects of renal artery stenosis. By having limited oxygen and nutrients, the architecture of the kidney changes to some extent. It is gradually damaged as a result of oxygen ‘deprivation’ (ischemia) but kidney tissue is not immediately destroyed. Instead the kidney tissue changes to cope with the lower oxygen supply.

The filtering apparatus which makes up the majority of the kidney tissue shrinks, parts of it thickens, inflammation arises in localized areas and scar tissue may form in parts of the kidney. Ultimately it is the normal kidney function that is impacted causing changes in blood pressure, fluid and electrolyte levels as well as various other effects which can eventually lead to death.

The most common cause of narrowing of the kidney artery is atherosclerosis. It accounts for about 90% of all cases. Less commonly other diseases of the blood vessels or systemic diseases will lead to narrowing.

Atherosclerosis affects many types of arteries and most notably the arteries of the neck, heart, kidneys and limbs. Cigarette smoking, high blood cholesterol levels, obesity, high blood pressure and diabetes mellitus causes injury to the artery wall. Advancing age is another risk factor. Fatty plaques build up in the artery wall gradually narrowing it over months and years. This is known as chronic progressive stenosis meaning that the narrowing develops gradually and worsens over time.

Eventually this plaque may rupture and is then unstable. It is more likely to promote a clot to quickly develop at site thereby blocking the artery completely. The narrowed artery on its own, even if the plaque does not rupture, can become blocked if a clot from elsewhere in the bloodstream reaches it and becomes impacted. Atherosclerosis tends to affect both renal arteries simultaneously – bilateral stenosis.

Other causes of stenosis

There are various other causes of narrowing of the kidney artery or arteries. Many of these causes may lead to only one sided narrowing meaning that only one kidney is affected – unilateral stenosis. These diseases account for about 10% of renal artery stenosis cases. Some of these other diseases includes :

A clot can block the artery completely but it is not common for a blockage to occur with a healthy artery that is not narrowed. Therefore the underlying cause of both renal artery stenosis (narrowing) and renal artery occlusion (blockage) is still atherosclerosis or the other diseases mentioned above. Sometimes the clot can arise at the site of the narrowing within the renal artery. In this case it is known as a thrombus.

At other times the clot may develop elsewhere in the body and travel through the bloodstream to become impacted at the narrowed portion of the renal artery. This is known as an embolus. Less commonly pieces of plastic in the bloodstream usually from catheters, fat globules, cancer cells and other types of tissue may be in the bloodstream and block the already narrowed renal artery. A blockage occurs suddenly (acute) unlike stenosis and can lead to death of the kidney tissue.

Initially there are little to no symptoms. Eventually the signs and symptoms of chronic kidney disease develop gradually over time. The main clinical feature is azotemia where the urea levels in the bloodstream rises. Urea is normally removed and excreted by the kidney. Uncontrollable or difficult to manage hypertension (high blood pressure) is another sign of renal artery stenosis. The most prominent symptoms become evident when the artery is severely narrowed and almost blocked, or completely blocked usually by a clot.

There are various symptoms associated with a blockage of the renal artery. The signs and symptoms of chronic kidney disease develops about 24 hours after the occlusion occurs. Symptoms of a renal artery occlusion includes :

The symptoms and medical history may raise the suspicion about renal artery stenosis. However, further diagnostic investigations are necessary to confirm the diagnosis. Blood and urine tests will indicate kidney dysfunction by an increase in the level of creatinine in the blood as well as protein and blood in the urine. Tests to visualize the narrowing or blockage and assess its severity includes :

Medication in renal artery stenosis may initially be prescribed for hypertension (high blood failure) and heart failure. Cholesterol-lowering drugs like some statins may be helpful in limiting the size of the fatty plaque in the wall of the kidney artery. A clot may be treated with the use of certain drugs like :

Surgery is not usually the first option to restore blood flow (revascularization) since medication such as clot-busters may be very effective for undoing a blockage. The medical approach is less likely to lead to complications. If the blockage occurs suddenly as a result of trauma then surgery is usually considered first. Angioplasty is a procedure where a catheter is inserted into the affected renal artery and a balloon is inflated to widen the artery. A stent may then be inserted to keep the artery widened.