What is renal vein thrombosis?

Renal vein thrombosis is a blood clot that forms inside the blood vessel that empties blood out of the kidney. Unlike blockage of the artery that brings oxygen-rich blood to the kidney, a renal vein thrombosis is unlikely to cause permanent damage to the kidney or death of any portion of the tissue. However, it does impair kidney function that has a host of consequences. The greater danger is when the clot breaks away from the renal vein and reaches the lung where it causes an obstruction of the blood vessels (pulmonary embolism). Renal vein thrombosis usually does not present with any specific symptoms and may be found incidentally or should be investigated as a possibility with certain conditions that are known to cause it.

Blood flow to and away from the kidney is through the renal artery and renal vein respectively. The artery carries oxygen rich blood to the kidney. This blood not only nourishes the kidney tissue but is also filtered so that wastes can be removed from the bloodstream. The blood eventually drains into the renal vein and sent to the right side of the heart. 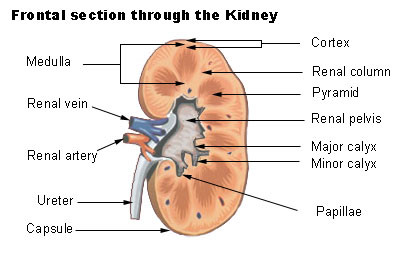 Picture of the kidney from Wikimedia Commons.

Blood has the ability to clot. This mechanism ensures that any break in a blood vessel can be quickly sealed to prevent significant and severe blood loss which may be fatal. A blood clot can form in any vein or artery. When it forms at a site in the blood vessel then it is known as a thrombus and the process is known as thrombosis. If it breaks away from a site and travels through the bloodstream then the clot is known as an embolus. It can then become lodged in another blood vessel and this process is known as embolism. Blood clotting occurs due to three factors known as Virchow’s triad :

All these factors can contribute to the formation of a blood clot (thrombosis) in the renal vein. Trauma can injure the blood vessel as well as various diseases. Disruptions is blood flow may arise with a tumor in the vein. Different conditions like dehydration and nephrotic syndrome can alter the coagulability of blood meaning that the chances of a clot forming are greater.

Effects of a renal vein clot

A blood clot in the renal vein impairs the outflow of blood from the kidney. This is blood that is low in oxygen and needs to drain into the inferior vena cava. From here it is transported to the right side of the heart, sent to the lungs for re-oxygenation and circulated again. Blood can back up in the kidney since its drainage is partially or completely obstructed. This causes stasis of blood and increases the possibility of further clots forming. It can ultimately impact on kidney function and lead to renal failure. 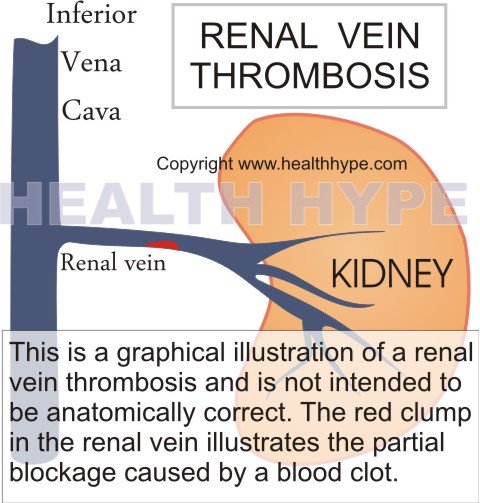 Most cases of renal vein thrombosis occurs in adults and the leading cause is kidney disease. Nephrotic syndrome associated with these diseases that can cause clot formation includes :

Injury  to the abdomen or back can also contribute to renal vein thrombosis. This includes blunt force impact (like a punch or blow) and sharp penetrating injuries.

The use of oral contraceptives and steroids can also cause the formation of a blood clot in the renal vein.

An abdominal aortic aneurysm (AAA) can compress the vein and affect the flow of blood thereby contributing to renal vein thrombosis. Enlarged lymph nodes and scar tissue around the renal vein may also cause compression.

Clotting disorders such as antithrombin III deficiency may impact on the coagulatibility of blood therefore predisposing to clot formation. The coagulability is also affected by pregnancy and other high estrogen states usually caused by oral contraceptives.

In renal cancer, the cancer cells can spread to the vein thereby triggering formation of a blood clot in the renal vein. This is known as a tumor thrombus.

The symptoms of a renal vein thrombosis are not usually evident. However, the symptoms of the causative condition or complications are more likely to be evident.

Flank pain and hematuria (blood in the urine) are the major symptoms that appear when there is a sudden and severe blockage of the renal vein.

Blood in the urine (hematuria) and unintentional weight loss over time.

If the blood clot dislodges, travels through the bloodstream (embolus) to lodge in the lung vessels then it can be life threatening within a short period of time. This is known as a pulmonary embolism. Symptoms include :

A special contrast dye is delivered into the veins and the blood can be visualized on an x-ray thereby indicating any narrowing.

A contrast dye which is visible on x-ray is injected into the renal artery which is useful in some causes of renal vein thrombosis where the kidney artery is also involved.

High frequency sound waves (ultrasound waves) are used to visualize the kidney and veins and assess the blood flow. However, it is usually not sufficient for a definitive diagnosis.

A CT scan takes x-rays from different angles to create cross-sectional images of the body. X-rays pass through most tissues except bones and therefore a contrast dye may be needed to highlight the renal vein. An MRI uses radio waves and magnetic fields to form images of organs and different parts of the body. Both investigations may be useful for diagnosing renal vein thrombosis.

Depending on the size of the clot and degree of obstruction, as well as pre-existing kidney disease, a renal vein thrombosis may lead to kidney failure. Should the clot dislodge from the renal vein, it will pass into the inferior vena cava, through the right side of the heart and obstruct the pulmonary blood vessels (lungs). This can affect the flow of blood to the lungs where carbon dioxide would be passed out and oxygen received. This is known as a pulmonary embolism and is potentially fatal.

Treatment should be targeted at the underlying cause and the clot may eventually dissolve on its own. However, various measures may need to be taken to prevent the clot from breaking off or new clots from forming.

Surgery is usually not conducted unless renal vein thrombosis is due to cancer or both renal veins have clots within it. Sometimes a filter is placed in the inferior vena cava to trap any blood clots that break away from the renal vein thereby preventing it from lodging in the lungs. However, anticoagulants are usually sufficient for this purpose.