Rheumatoid arthritis is also associated with serious complications in severe cases, like deformity of the joints and disability. These complications can be minimized to some extent with early diagnosis and appropriate management. But the key is educating people to spot the warning signs and early symptoms in order to seek medical attention. 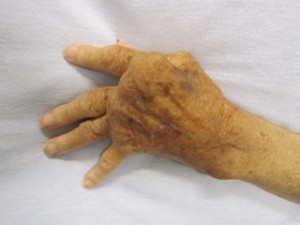 Women Around 40 Years Of Age

A recent study has also found an association between rheumatoid arthritis risk and pregnancy, even if it was earlier in life. Women who have just 1 child in their lifetime are at a greater risk of RA than those who have 2 or 3 children. Problems during pregnancy like hyperemesis gravidarum, gestational hypertension and pre-eclampsia are also associated with a great RA risk. Therefore women who have experienced these problems, especially if they have a first-degree relative with rheumatoid arthritis, need to be particularly cautious. Read more on rheumatoid arthritis epidemiology.

A Family Member With RA

The exact cause of rheumatoid arthritis is not known although the mechanism of the disease is understood. Genetic factors appear to play a major role. It is now known that having a first-degree relative with rheumatoid arthritis can increase a person’s risk of developing rheumatoid arthritis by two- to three-fold. A first-degree relative includes parents, siblings and children. However, genes are only a a single factor. Among monozygotic twins (identical twins) the condition only affects both twins in about 20% of cases. Therefore non-genetic factors are equally important.

It has been postulated for quite a while that an infectious agent may play a role in the development of rheumatoid arthritis. This does not mean that an infection is the cause of rheumatoid arthritis. Rather the exposure to certain microoragnisms may serve as a trigger. It is believed that antibodies formed against certain bacteria and viruses may attach to the joint lining and direct the immune response against healthy tissue.

One such microorganism is Porphyromonas gingivalis, which is responsible for periodontitis, an infection of the gum and tissue around teeth. Large amounts of antibodies against this bacteria has been found in the joint fluid of RA patients. Recent studies continue to support this link between periodontal disease and rheumatoid arthritis.

Any Persistent or Recurrent Symptoms

The small joints of the body are usually affected first in rheumatoid arthritis. This is in contrast to osteoarthritis where the condition primarily affects the large joints like the shoulder, hip and knees. Rheumatoid arthritis also affects the large joints but this usually occurs later in the condition. The small joints that are most commonly affected in the early stages are that of the hands and feet, where the fingers and toes attach respectively. This may include stiffness, pain, redness, swelling or tenderness. Characteristic symptoms like joint nodules are usually do not occur early in the disease.