The heart receives blood in its atria and pushes out blood from its ventricles. There are four such chambers in the heart – right and left atria (singular ~ atrium) and the right and left ventricles. The right side of the heart (right atrium and right ventricles) handles deoxygenated blood (blood that is low in oxygen). This is also known as the pulmonary circulation. The left side of the heart (left atrium and ventricle) handles the oxygenated blood (blood rich in oxygen) which is also referred to as the systemic circulation. The blood on either side is kept separate so that deoxygenated and oxygenated blood does not mix. A wall between the right and left side of the heart, known as the atrioventricular (AV) septum, ensures that blood stays in its respective side. However, if there is any abnormality during fetal heart development, this septum may be compromised. 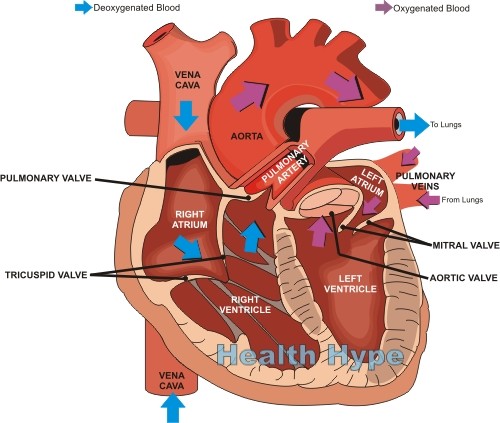 A cardiac shunt is an abnormal communication between the pulmonary and systemic circulation due to a structural defect of the heart and/or great blood vessels. It is the most common type of congenital heart defect, which means that it develops during fetal life.

The fetal heart initially forms from a crescent of mesodermal cells that develop into a beating tube around day 20 of gestation. By day 28 the heart starts taking shape with chambers and major blood vessels and by day 50 the AV septum and valves separate all the chambers. Although the unborn child has a fully functioning heart, the blood from the right side is not routed to the lungs for oxygenation. Instead oxygen is derived from the mother’s circulation. Therefore blood that is bound for the lungs may instead be routed directly to the left side and then distributed to the rest of the body. These ‘shunts’ in fetal life are normal and close by birth.

Effects of a Right-to-Left Shunt

In a right-to-left shunt, the dexoygenated blood from the right side of the heart (pulmonary circulation) flows into the left side and bypasses the lungs. This oxygen-deficient blood mixes with the oxygen-rich blood on the left side (systemic circulation) and is then pumped out to the rest of the body. The net effect is a reduction in oxygen levels in the systemic circulation (hypoxemia) which means that the entire body receives less oxygen. Therefore the clinical features of hypoxemia are evident in a right-to-left shunt. In newborns, the oxygen deprivation causes a bluish discoloration of the skin known as cyanosis and this is often referred to a cyanotic congenital heart disease.

A left-to-right shunt causes more blood to move from the left sight of the heart to the right. This increase in blood volume causes a rise in blood pressure on the right. Since the right side of the heart normally handles lower pressures than the left, it has to accommodate for this increase in pressure. The heart wall becomes thicker and so does the pulmonary artery leading from the right ventricle. This thickening causes a simultaneous narrowing and decreases the flexibility of the right ventricle and pulmonary artery. In the long term, the thicker pulmonary artery and right ventricle may become less compliant and the hardening can reverse the shunt. Therefore a left-to-right shunt becomes a right-to-left shunt.

There are several congenital heart defects that may result in a right-to-left shunt. The most common are :

Irrespective of the type of defect, the effect is usually the same – deoxygenated blood mixes with oxygenated blood and enters the systemic circulation. This lowers the total oxygen supply to the body. It is also important to note that different types of left-to-right shunts may reverse to form right-to-left shunts.

Tetralogy of Fallot (TOF)  is a combination of four heart defects that arise in fetal life. These defects include : 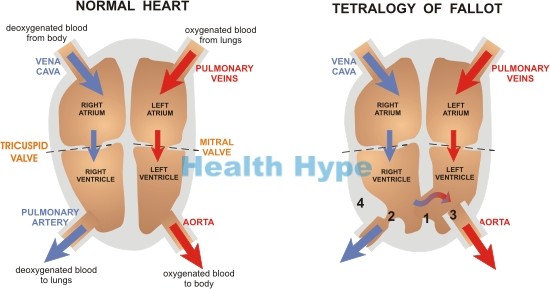 Corrective surgery is essential as it can be life-threatening if left untreated. Some patients may survive till early adulthood.

Normally, the right ventricle and left ventricle push out blood into separate arteries known as the pulmonary artery and aorta respectively. In persistent truncus arteriosus, these two arteries are fused due to the incomplete development in fetal life. This single artery carries a mixture of deoxygenated and oxygenated blood from the right and left ventricles respectively. Some of this blood travels to the lungs while the rest is distributed to the the body.

Persistent truncus arteriosus is usually associated with ventricular septal defect (VSD) meaning that there is an abnormal communication point between the right and left ventricles. As a consequence, the pressure of blood traveling to the lungs is higher than normal (pulmonary hypertension) while the systemic circulation is low in oxygen. This condition is usually fatal within the first year of life unless corrected with surgery.

Tricuspid atresia is a complete blockage of the area between the right atrium and ventricle. Normally the tricuspid valve regulates blood flow in one direction between these chambers. Therefore blood returning to the heart cannot be passed directly to the right ventricle for oxygenation by the lungs. Other congenital heart defects that accompanies tricuspid atresia creates an alternative pathway for blood flow albeit abnormal and unsustainable in the long term. Some of these defects include an arterial septal defect (ASD), ventricular septal defect and/or patent foramen ovale. These are severe defects and an infant may not survive beyond a few weeks or months at most. 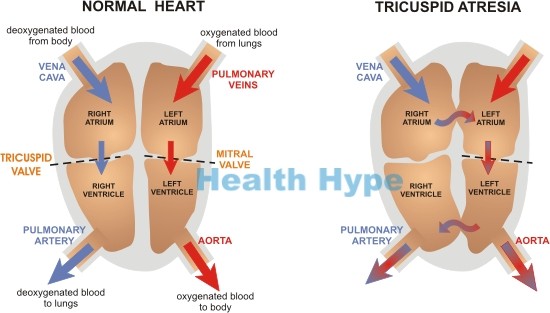 Transposition of the Great Arteries

Considering the severity of this defect, life would be unsustainable after birth. However, other defects usually exist which shunts blood between the two sides of the heart. This may be a patent foramen ovale, patent ductus arteriosus or ventricular septal defect. The former two defects cause an unstable shunt that may close at any time while the latter produces a stable shunt. Nevertheless these are severe defects and without surgery, the mortality rate is high.

Signs and Symptoms of Right-to-Left Shunts

The mixing of deoxygenated blood with oxygenated blood and entry into systemic circulation deprives the body of oxygen. This leads to a host of clinical features including :