There are many different types of parasitic worms that can infect humans. Roundworms are one such type. There are some 500,000 species of roundworms and about 60 are known to infect humans. It can infect a number of different organs in the human body, not only the digestive tract as is often though. Most infections are not serious and a person may not even be aware of the worms. But some roundworm infections can be serious or even complicate into life-threatening conditions.

Roundworms are parasitic worms (helminths) that belong to the phylum Nematoda. In other words, roundworms is the common name for one type of parasitic worm known as nematodes. These worms are elongated, have a large body cavity and an intestinal system. Most roundworms that parasitize humans live in the gut. It is estimated to affect as much as one-third of the world’s population although the majority of people have no major symptoms and are therefore unaware of the worm infection.

Some roundworms can cause fatal complications in humans. It is more likely to occur if the roundworms move outside of the intestines to other vital organs. It may then lead to inflammatory responses within these vital organs. However, life threatening complications are rare in most people who contract roundworms. Newborns and people with a weakened immune system (immunocompromised) are at a much greater risk of death from the complications of roundworm infections. 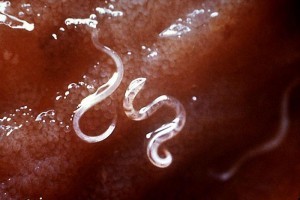 There are several ways that roundworms enter the human body. It can be spread from an infected person to another person who is uninfected. The main routes by which roundworms enter include:

These routes are not only applicable to humans. Many roundworms that infect humans can also infect other mammals. Some worms can be spread from person to person, while others require soil or insects to complete a part of its life cycle in order to infect people.

There are a number of different species of roundworms but the most common ones to infect humans include:

Diseases due to infection with these worms are named according to the worms that cause it, such as:

The nature of the diseases caused by roundworms are somewhat similar. Most parasitic worms do not replicate within the human host. Instead the eggs pass out of the human body until it hatches and matures partly before infecting another person, or these eggs have to be consumed. Therefore there usually has to be repeated exposure to adult worms, its larvae or eggs in order for it to be sufficient to cause disease within humans.

The human immune system does not have the same immune protection against roundworms as it does to other microbes like bacteria or protozoa. Since Ascaris lumbricoides which causes ascariasis is the most common of these worms to infect humans, it is worth focusing on it specifically.  Most roundworms infections will be similar but there are some distinct and significantly varying disease processes with some of these worms. 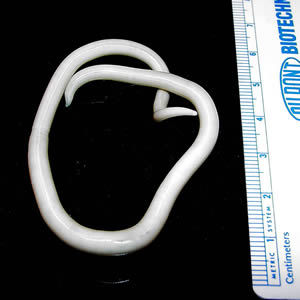 In ascariaisis, the worm eggs are consumed. It then hatches in the small intestine and larvae emerge. These larvae penetrate the intestinal wall and migrate to the large veins of the liver. From here it moves to the lungs. The larvae are expectorated and swallowed again. It then goes to the middle portion of the small intestine (jejunum) where it matures into adult worms. These adult worms are then able to sustain themselves by feeding on nutrients in the gut.  Eventually adult worms release eggs which are passed out in the feces. It can then contaminate food or water and the cycle is repeated.

The signs and symptoms largely depend on the number of worms in the body, and the location of these worms. Gastrointestinal symptoms are the most common. However, it is important to note that most people who do have roundworm infection are not even aware about it.

Depending on the worm there may be skin, nerve and eye symptoms. It can be mild or as serious as loss of vision as may be seen in river blindness (onchocerciasis which is caused by the filarial worm Onchocerca volvulus). Bowel obstruction may occur in some instances when the worms increase in number in the intestine and become tangled. Some worms attempt to exit through the nose in much the same way as some worms pass out in the stool.

A roundworm infection diagnosis first needs to be confirmed before medication can be prescribed.

This can be done with diagnostic investigations like a stool tests. The eggs of the worm may be found in the stool, and sometimes even the adult roundworm. The larvae may also be found in the sputum. Blood tests may reveal the body’s response to a large number of worms like raised immune activity and an increase in certain white blood cells. However, blood test alone cannot identify a roundworm infection or the type of worm. Sometimes the worms may be visible on an x-ray or ultrasound. A biopsy of skin lesions may be done to confirm the diagnosis in onchocerciasis.

Roundworm infection can be effectively treated. However, the focus should also be on prevention to avoid a recurrence of the infection. The worms do not have to be removed surgically unless large number of worms are causing an obstruction, or other complications. Medication is usually effective in eradicating the worm. The correct drugs can also prevent complications. Some of these drugs include: