A stone in the salivary gland most commonly occurs and causes symptoms when it is lodged in the duct of the gland. The medical term for the  formation of a salivary duct stone is sialolithiasis and a stone is known as a salivary calculus or sialolith. A stone usually results in partial or complete blockage of the salivary duct. This obstructs the flow of saliva out of the gland and gradually leads to inflammation as the accumulated saliva seeps into the surrounding glandular tissue. A secondary infection, often bacterial, may then arise in the salivary gland.

There are three pairs of salivary glands in the human mouth – sublingual, submandibular and parotid. Each of these glands have a duct through which saliva drains into the mouth. The saliva contains a mucus and serous component as discussed under saliva secretion.

While the glands produce a combination of both mucus and serous fluid, the parotid gland almost exclusively secrete serous fluid in response to food in the mouth. Most salivary gland stones arise when saliva crystallizes. Although dehydration has been implicated as the main cause for this crystallization and thus stone formation, there may be other obscure causes that have not been clearly identified as yet.

Salivary gland stones are most likely to affect the submandibular glands. Usually there is more than one stone and the sizes of these stones vary anywhere from less than 1 mm (millimeter) to 9 to 10 mm or even larger. If there is only partial obstruction of the affected salivary duct, then symptoms may be minimal or absent (asymptomatic). 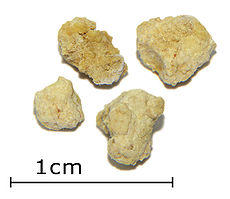 The most prominent symptoms of a salivary gland stone includes :

An infection often occurs which may present with a constant pain, redness and rarely a fever. Since there are multiple salivary glands, a stone usually does not cause symptoms like excessive dryness of the mouth (xerostomia).

Most salivary glands stones will be visible on x-ray as it is often composed of calcium. However, further investigation may be required to conclusively identify a stone, especially if it is not evident on an x-ray but the symptoms are indicative of a stone. This includes a sialogram where a radiocontrast dye is injected into the gland to define any obstructions or disturbance in saliva flow on an x-ray. A sialendoscopy involves using a type of an endoscope, which is long tube-like device fitted with a light and camera, to visualize the stone in the duct.

Treatment may initially be fairly conservative if there is no infection present. This may involve increasing salivation by making the patient suck on sour foods in the hope that the greater saliva flow dislodges the stone. However, if there is widespread inflammation and an infection, the drug therapy may be commenced immediately.

Other procedures may include gently massaging or probing the stone to dislodge it. This should be done by a doctor, preferably an ENT specialist (otolaryngologist), to avoid trauma to the gland and surrounding tissue. The stone may also be physically removed during sialendoscopy. This may also require shock wave treatment (lithotripsy) to first fragment the stone and remove an particles that do not spontaneously pass out. For larger stones, minor surgery may be necessary but the effectiveness of sialendoscopy these days has made the surgical procedures fairly uncommon.