Salmonella bacteria mainly cause food poisoning illnesses that more commonly occurs in summer. These bacteria may be acquired from a range of foods, contaminated water and by handling tainted products. It often leads to small outbreaks throughout the year. Organizations like the Center for Disease Control (CDC) keeps track of these outbreaks and regularly reports findings and issues warnings to the public. Salmonellosis (the disease caused by Salmonella bacteria) can lead to life-threatening complications which can be avoided with prompt treatment of the infection. However, the purpose of tracking and reporting outbreaks is to prevent Salmonella infection before it occurs.

Salmonella are a group of gram-negative bacteria. It includes several species which can be broadly categorized as typhoid Salmonella or non-typhoid Salmonella. The former causes typhoid fever while the latter is limited to gastrointestinal disturbances that is typically labeled as food poisoning or bacterial gastroenteritis.

Salmonellosis typically lasts for about 4 to 7 days. Recovery is often spontaneous without the need for medical treatment. It is more likely to be severe and lead to serious complications in children, the elderly and people with weakened immune systems (immune compromised). Most cases of salmonellosis are never reported to a doctor. It is usually passed off as food poisoning and managed conservatively at home with bed rest and plenty of fluids.

Despite the fact that salmonellosis can resolve on its own without treatment, it is considered to be the deadliest of all foodborne infections. However, death from Salmonella infection is still considered to be rare in the United States, with the disease killing less than 1 out of 100 people who are infected every year. The highest incidence of death from salmonellosis in the United States is seen in nursing homes and hospitals. 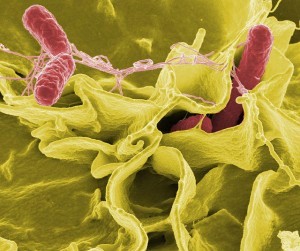 Salmonellosis, or salmonella poisoning as it is often referred to, can occur at any time in the year. However, it is most common in summer for several reasons. Summer means warmer environmental temperatures, both indoors and outdoors. Warmth promotes bacterial growth and thereby increases the chance of these bacteria contaminating food.

Picnics and other outdoor eating recreational activities tends to occur more frequently in summer where food may be sitting outside of the refrigerator for longer periods. Food is eaten at room temperature during these activities rather than being heated before eating. This means that the bacteria that may have multiplied and contaminated the food, are not destroyed.

Thus far there have been seven reported Salmonella outbreaks in the United States, according to the CDC. Salmonella is primarily spread through contaminated food, with eggs and poultry being the main culprits. However, it can be spread through many other foods including ground meat, processed foods and fruits and vegetables. Some of the outbreaks of 2014 were also associated with pets and herbs.

The outbreak was traced back to certain batches of raw cashew cheese produced by the abovenamed manufacturer. There were 17 people reported to have been infected with this outbreak strain. Most infections were reported in California. It led to 3 hospitalizations but no deaths have been reported.

The outbreak was traced back to mechanically separated chicken products from the abovenamed manufacturer at a correctional facility in Tennessee. It led to 9 people falling ill and 2 requiring hospitalization but there were no deaths. Although the same strain was isolated in outbreaks in 15 other states, the source in these cases could not be identified.

The outbreak was traced back to contact with pet bearded dragons purchased from multiple pet stores across 35 states. By early June 2014, 150 reported cases were recorded and most patients were children of 5 years or age or younger. The hospitalization rate was 43% and no deaths were reported. The vast majority of cases were due to Salmonella Cotham.

The outbreak was traced back to contact with live poultry (chicks, ducklings and other) that were sourced from the abovenamed hatchery. By late June 2014 there were 251 people reported to have been infected. The hospitalization rate was 32% and not deaths were reported. Infections were reported across 37 U.S. states.

The outbreak was linked to contact with frozen feeder rodents packaged by the abovenamed company. It resulted in 41 people being infected with the strain of Salmonella bacteria. The cases were spread out over 21 states. The hospitalization rate was 16% and no deaths were reported.

The outbreak was traced back to organic sprouted chia seeds or powder within products sold by several American and Canadian manufacturers. The products that have been identified as being tainted include certain health products and food mixes. There were 21 reported cases of infection with 2 cases requiring hospitalization. No deaths have been reported.

The outbreak was associated with exposure within clinical and university microbiology laboratories. Most of the infected people in this outbreak were students. It resulted in 41 cases being reported and most people infected were 21 years or younger. The hospitalization rate was 36% and no deaths were reported.