Dyspepsia is the medical term used to describe a number of gastrointestinal symptoms which can cause mild discomfort to extreme pain. There are a number of trigger factors but it usually tends to occur or get worse after eating (especially certain foods and drinks), when hungry or if stressed (nervous dyspepsia). For this reason, dyspepsia is also referred to as indigestion or an upset stomach, however, there may not be an actual disturbance of normal digestive functioning in some cases. A bout of indigestion can last for a few minutes or persist for several hours.

Generally the symptoms associated with indigestion are felt in the upper part of the abdomen and include esophageal or stomach pain, heartburn, cramps, nausea, excessive belching (burping), feeling full after eating smaller than normal quantities of food, regurgitation and/or abnormal stomach noises. One or more symptoms may be present and referred to as indigestion, however, many of these symptoms could be attributed to some other underlying disorder. Dyspepsia is usually associated with a range of symptoms emanating from the upper gastrointestinal tract – esophagus (food pipe), stomach and first part of the small intestine (duodenum). There are many causes of dyspepsia, some are temporary and benign, while others can be chronic and severe. 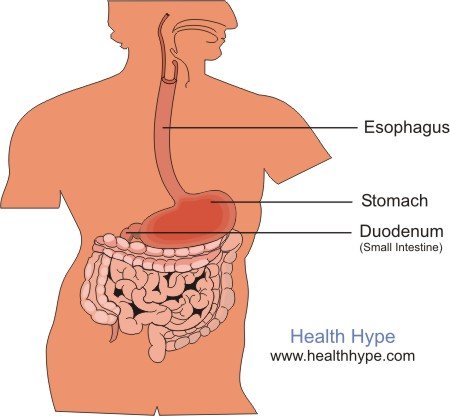 While indigestion is not taken very seriously if it occurs occasionally and passes without the need for further treatment, there are certain clinical features which should prompt immediate medical attention. These include vomiting with/without blood (hematemesis), difficulty swallowing (dysphagia) and weight loss. Further investigation is definitely warranted if your doctor finds that you are anemic or have an abdominal mass along with repeated bouts of indigestion.

The odd bout of indigestion (dyspepsia) will occur in a person’s lifetime and can be extremely uncomfortable yet it is usually not related to any serious condition. Some of the common causes of indigestion include :

These causes are usually benign – not detrimental to one’s health, will not recur again unless triggered by one of the  factors above and there is no progression of the condition.

Recurrent bouts of indigestion may be caused by other conditions which need to be treated and properly managed. These conditions can cause severe indigestion with bouts lasting for hours or even days and recurring immediately after the cessation of one episode. The experience may be more intense than just an ‘upset stomach’ and can affect a person’s life, cause a lack of appetite and even result in depression.

Consult with your doctor immediately if any of the following signs and symptoms are also present :

Indigestion is present in all of the conditions below, either constantly or episodically. In order to identify a possible cause, it is important to take note of other signs and symptoms which are features of the diseases mentioned below. This list is in alphabetical order and does not indicate any relevance in terms of position.

Indigestion is a common feature of cancer, not just with a malignancy within the gastrointestinal tract. Nausea, vomiting, a lack of appetite with loss of weight are often seen in cancer and acute bouts of these symptoms may be seen after chemotherapy. A tumor within the gastrointestinal tract or surrounding organs may cause a partial or complete obstruction of the gut and impede the movement of food. This can also cause indigestion and pain will usually be present as well.

Indigestion is a common side effect of most pharmaceutical drugs especially with antibiotics, corticosteroids and NSAIDs (non-steroidal anti-inflammatory drugs) and after the use of anesthesia. Overuse or overdose may be more likely to lead to indigestion, even with drugs that are not known for causing dyspepsia.

Functional gastrointestinal disorders that can cause indigestion include non-ulcer dyspepsia and IBS (irritable bowel syndrome). The symptoms of these conditions will vary but often other gastrointestinal symptoms like abdominal pain, bloating, increased intestinal gas leading to excessive belching, nausea and change in bowel movement (particularly with IBS) are usually present.

Stones that form within the gallbladder (cholelithiasis) usually causes mild symptoms or no symptoms may be present. The most intense symptoms are experienced when the stone lodges in the duct leading from the gallbladder to the intestine thereby causing a blockage.

Pain is usually the main symptom – it is severe and may be present in the upper part of the abdomen, usually more intense in the upper right quadrant of the abdomen (Refer to RUQ Abdominal Pain), chest, back and shoulder on the right side. As the condition progresses, jaundice (yellow discoloration of skin and eyes) may be evident , fever and pain accompanied by nausea and vomiting.

Inflammation of the stomach lining which may be acute or chronic in nature. In acute cases, the onset of symptoms are severe and sudden while chronic gastritis develops over a period of time yet the symptoms can be just as severe. Common symptoms include a stomachache, bloating and gas, excessive burping, feeling full quickly even after eating small meals.

Irritation of the lining of the esophagus (food pipe) due to stomach acid rising up the esophagus. Common symptoms include heartburn or chest pain (refer to Gastric Chest Pain), regurgitation, sore throat or hoarse voice especially after sleeping.

A portion of the stomach pushes up above the diaphragm into the chest cavity and is trapped within the diaphragmatic opening. Symptoms are similar to GERD – heartburn, nausea, chest pain,excessive belching.

The muscles in the gastrointestinal tract may go into spasm (intestinal or esophageal spasms) or are under-functioning, almost to the state of paralysis. Symptoms will vary but may include severe colic pain due to spasms to slow movement of food through the gut leading to symptoms like constipation.

A number of diseases of the pancreas may cause indigestion including chronic pancreatitis (inflamed pancreas), pancreatic cancer, obstruction of the common bile duct and diabetes. Some of the symptoms may include sharp pains in the abdomen often extending to the back and gastrointestinal symptoms that aggravate after eating. Low blood glucose levels (hypoglycemia) may also cause indigestion.

Ulcers (open sores) in the stomach (gastric ulcer) or first part of the small intestine (duodenal ulcer). Pain, burning, and nausea is often present, especially when hungry (empty stomach), at night and pain that is relieved by antacids.

Other Causes of Severe Indigestion