Most of us determine the size of eyes by the portion of the eyeball that can be seen. This is usually a section of the sclera (white of the eye), the cornea (clear front part of the eye), iris (circular portion that determines eye color) and pupil (‘hole’ at the center of the iris), which are visible when the eyelids are open. Changes in what we are able to see of the eyeball tend to determine what we may refer to a large, small or change in eye size.

Therefore some people appear to have ‘larger’ or ‘smaller’ eyes than others. Even though eyeball size may vary among individuals, most of it is housed within the socket of the skull and is not usually not the determinant of what we casually refer to as large or small eyes. However, when there is an obvious change in a person’s eye ‘size’ then it has to be investigated further as it may be a reflection of some underlying disease.

It is unlikely that the eyeball would have shrunk in a person who appears to suddenly have ‘small eyes’. In most instances the change in eye size is due to a change in the degree to which the eyelid is opened, or surrounding swelling and puffiness around the eye makes it look smaller than usual.

Another possible reason is loss of fat tissue around the eye that gives the eyes a sunken appearance. This is often associated with aging and more frequently seen in older people. When apparent in children and younger adults, it may be a consequence of dehydration.

Eye makeup can also alter the appearance of the eyes and sometimes seem to change the shape and size. This is a cosmetic effect that is reversed once the eye makeup is removed.

The causes of shrunken eyes are discussed in the context of problems around the eyeball that make the eyes seem smaller in size. Often there are associated symptoms like eye redness, excessive tearing and even changes in vision. Changes in eye size on one side or involving both eyes may also be an indication of the possible cause.

As we feel sleepy, the eyelids become ‘heavy’ on both sides and its position it is not as wide opened as it normally would be. This is a common occurrence in people of all age as they feel sleepy and particularly when they are tired. It is more prominent in people who do not sleep sufficiently, with long waking hours and exertion that results in fatigue. Eventually it results in puffy eyes which can be a long term problem.

Another common cause of a shrunken eye appearance is eyestrain and the eyelids rest at a lower than normal position. Both sides are affected. It may at times be associated with general fatigue and sleepiness. Eyestrain is common these days with long hours of staring at bright objects at a fixed distance, namely TV, computer and mobile device screens. It can also occur with reading for long periods. Poor lighting conditions can further contribute to eyestrain.

Read more on how to avoid eyestrain. 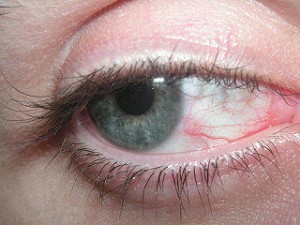 A blow to the eye is one of the common traumatic causes that may lead to swelling around the eyeball. This usually affects one eye. When there is bruising, it is often referred to as a black eye. This swelling is due to inflammation and subsides over a period of a few hours to days. Rubbing the eyes and eyelids vigorously can also cause injury and lead to swelling of the surrounding tissue.

We all close our eyelids to varying degrees when faced with bright light. Some people are sensitive to light and will close their eyelids even if the light intensity is considered normal. This is often seen with eyestrain or insufficient sleep. However, light sensitivity may also be linked to various diseases such as meningitis.

Another problem is squinting due to poor eyesight. People who usually wear eyeglasses and contact lens may find the need to squint to see without these corrective devices. Squinting may also be a symptom of undiagnosed vision problems. Most of the time this is due to refractive errors of the eye like nearsightedness (myopia). 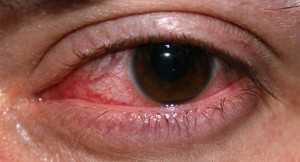 Movement of the eyelids is controlled muscles which are in turn controlled by nerves. Damage or diseases of these muscles and nerves can affect eyelid movement and lead to conditions like dropping eyelids, also known as ptosis. This can include conditions like myasthenia gravis, traumatic brain injury, Bell’s palsy and multiple sclerosis. Depending on the site of the problem it may affect one eye or both eyes. Age also reduces muscle tone which may contribute to drooping eyelids.